Krathong are floated in the flooded area around the main ordination hall of Wat Arsasongkhram in Phra Pradaeng district of Samut Prakan on Friday evening. (Photo: Somchai Poomlard)

While other flooded temples have been busy drying out, one in Samut Prakan is making the most of a watery opportunity on Loy Krathong day.

“This is the first time ever that the temple has held the Loy Krathong event around the main ordination hall,” an invitation on the Facebook page of Wat Arsasongkhram declared on the eve of the festival.

The temple in Phra Pradaeng district was a victim of high tides on the Chao Phraya River that flooded the premises and the municipality less than a week ago.

Instead of draining the floodwater from the entire compound, Phra Pradit Apayo came up with an idea to keep the space around the main chapel flooded to a depth of about 40 centimetres so that people would celebrate the event in a unique setting.

His idea was approved by abbot Phra Metheethammasarn and on Friday night it drew people seeking a chance to float their krathong in a setting they had never experienced before.

Phra Pradit said worshippers could also take a short walk to go inside the main hall to pay respects to the main Buddha statue for good luck after seeing their floating krathong circling the chapel.

The unique idea could help people ease their stress from the Covid-19 outbreak, the monk added. 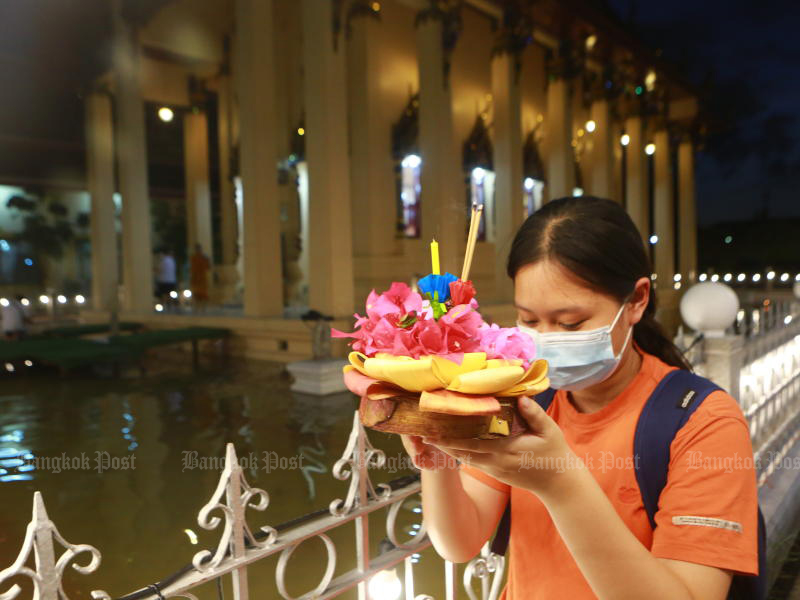 A woman prays before floating her krathong at the temple. (Photo: Somchai Poomlard)