Quarantine back for travellers
Thailand
General

Quarantine back for travellers

International passengers arrive at Suvarnabhumi airport on Monday. The ‘Test & Go’ programme for those entering the kingdom is scrapped on Tuesday because of the rising number of Omicron variant cases. (Photo: Varuth Hirunyatheb)

The government has decided to temporarily suspend the entry of both Thais and foreign arrivals under the "Test & Go" scheme and restore mandatory quarantine in a bid to keep the Omicron coronavirus variant at bay.

Prime Minister Prayut Chan-o-cha said the government would stop approving new applications for Test & Go entries -- except to the Phuket Sandbox -- from Tuesday until Jan 4, though visitors whose applications were previously approved will be allowed to enter Thailand as planned.

Speaking after chairing a meeting of the Centre for Covid-19 Situation Administration (CCSA), Gen Prayut said the decision was based on fears surrounding the spread of Omicron and the safety of the general public.

New arrivals will now undergo RT-PCR testing and be quarantined for between 7-10 days, Gen Prayut said on Tuesday.

A further 90,000 are waiting for approval for their applications, Gen Prayut said, adding that their health conditions will be monitored after arrival.

"There will be no approval of new applications until the situation is reviewed on Jan 4," Gen Prayut said. 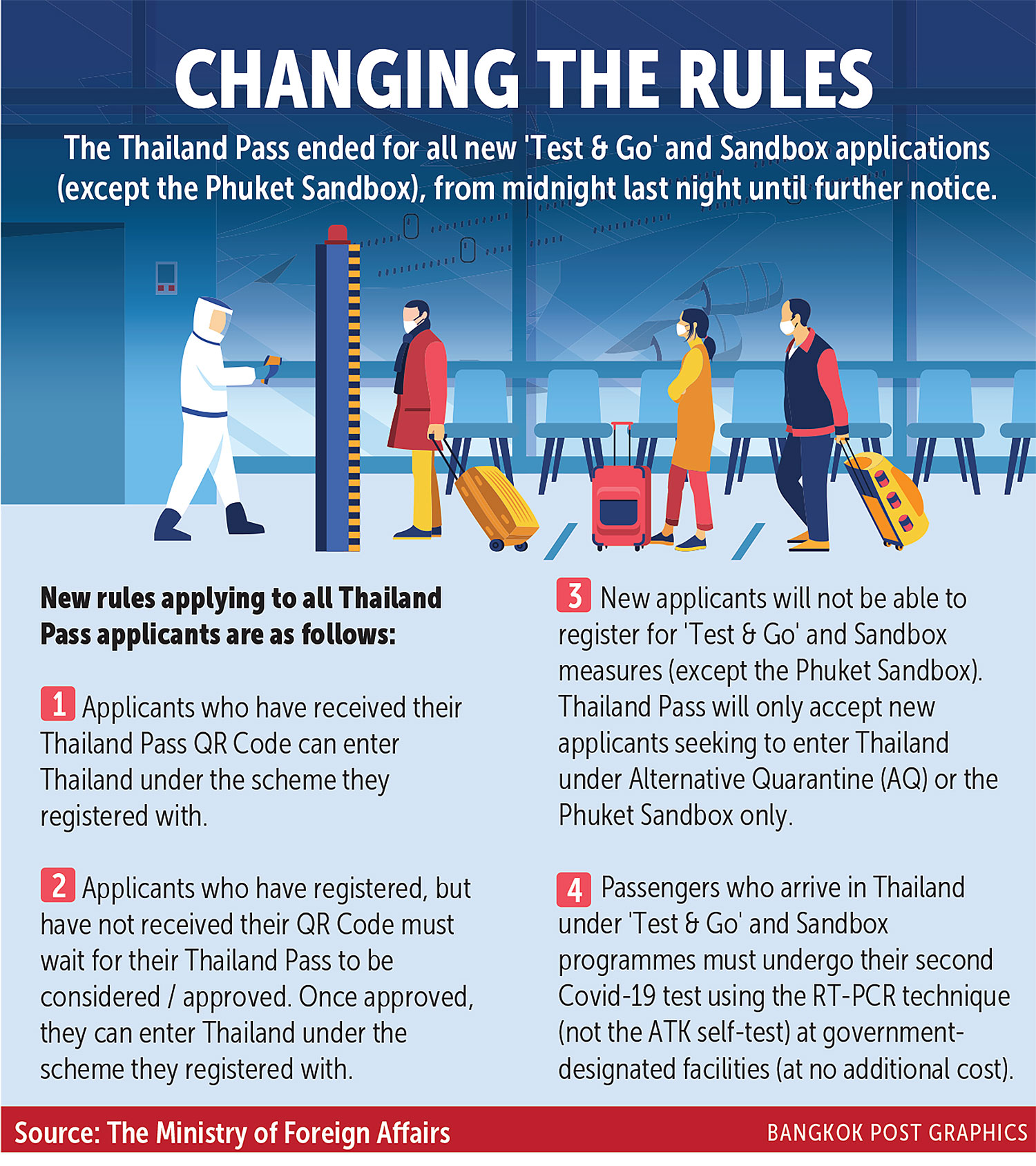 He said health officials had assured him that resources would be sufficient and health personnel capable of handling any Omicron outbreak that might result from those whose arrivals have already been approved.

With the suspension of the Test & Go scheme, Thais abroad who applied for entry as of Tuesday will also be quarantined, he said.

The entry scheme applies to visitors from specific countries. All arrivals must be fully vaccinated and test negative for Covid-19 shortly before entering the country. Test & Go tourists must also stay one night at an SHA Plus or AQ hotel to receive an RT-PCR test and wait for the result.

In addition to the decision to suspend the Test & Go programme, the CCSA did not resolve to make any other changes related to entry regulations on Tuesday, Gen Prayut said, adding that that New Year festivities will still be allowed to take place.

Government spokesman Thanakorn Wangboonkongchana said that visitors who have already applied for the Test & Go scheme will undergo two RT-PCR tests upon arrival and their health conditions will be monitored.

"Thais who plan to go abroad will also be asked to delay or cancel unnecessary trips, particularly to Europe, the US, Africa, and the Middle East," Mr Thanakorn said.

He insisted that the government has no plan to stop tourist arrivals, but had only suspended new applications under the Test & Go scheme while the Phuket Sandbox scheme will continue under stricter measures.

Deputy Prime Minister and Public Health Minister Anutin Charnvirakul said that more than 60 cases of Omicron in Thailand have been detected, and another 97 cases are pending confirmation.

As for Thais overseas who already applied for entry and are waiting for approval, Mr Anutin said that once their applications are approved, they will be allowed to enter under the revised Test & Go scheme.

Bhummikitti Raktaengam, president of the Phuket Tourist Association, said that tourism operators in Phuket do not want the government to bring back a mandatory quarantine for tourists again.

They insisted that the sandbox scheme should continue as the island province is still capable of welcoming foreign visitors, he said, adding that the scheme had a model for reopenings in several other countries.

Phuket has seen about 3,000 foreign arrivals per day under the Test & Go scheme since the reopening on Nov 1 and some 4,487 were logged on Dec 18, he said.