PHNOM PENH: Thirty-nine Thais, including a prime suspect in a fraud case, were arrested on Friday during raids in the Cambodian capital and Sihanoukville.

A team of Thai police and a Cambodian task force stormed two locations in the neighbouring country after an investigation found phone scammers might have been operating from there. The Thai team was led by Pol Maj Gen Phanthana Nutchanart, head of the Police Cyber Taskforce (PCT).

They allegedly duped Thais into transferring money to their accounts, causing millions of baht in damage.

The first place was the 10th floor of a building in downtown Sihanoukville of Kompongsom province. The team found several Thais making phone calls from there. A total of 32 people were caught.

At the second location, another team of police and soldiers raided an eight-storeyed building near the national airport in Phnom Penh.

Five Chinese nationals and seven Thais were found inside the building. They were suspected phone scammers. At this location, Mr Phayakkhaphon Chinglu, 30, of Chiang Rai who was wanted on an arrest warrant issued by the Chiang Mai provincial court for colluding in fraud and money laundering, was among the seven Thais caught.

The cooperation between the two countries came after Thai police had been told to take into custody Thais who had allegedly preyed on their compatriots by operating from the neighbouring country, according to Pol Maj Gen Phanthana, who cited orders from national police chief Pol Gen Suwat Jangyodsuk and deputy national police chief Pol Gen Damrongsak Kittiprapas, in his capacity as head of the PCT.

In one of the cases, some victims were swindled by scammers pretending to be police. They threatened to press charges against the victims, who they claimed had been involved in drug-related money laundering. The victims were then asked to empty their bank accounts and transfer all the money to them for examination, said Pol Maj Gen Phanthana. (contined below) 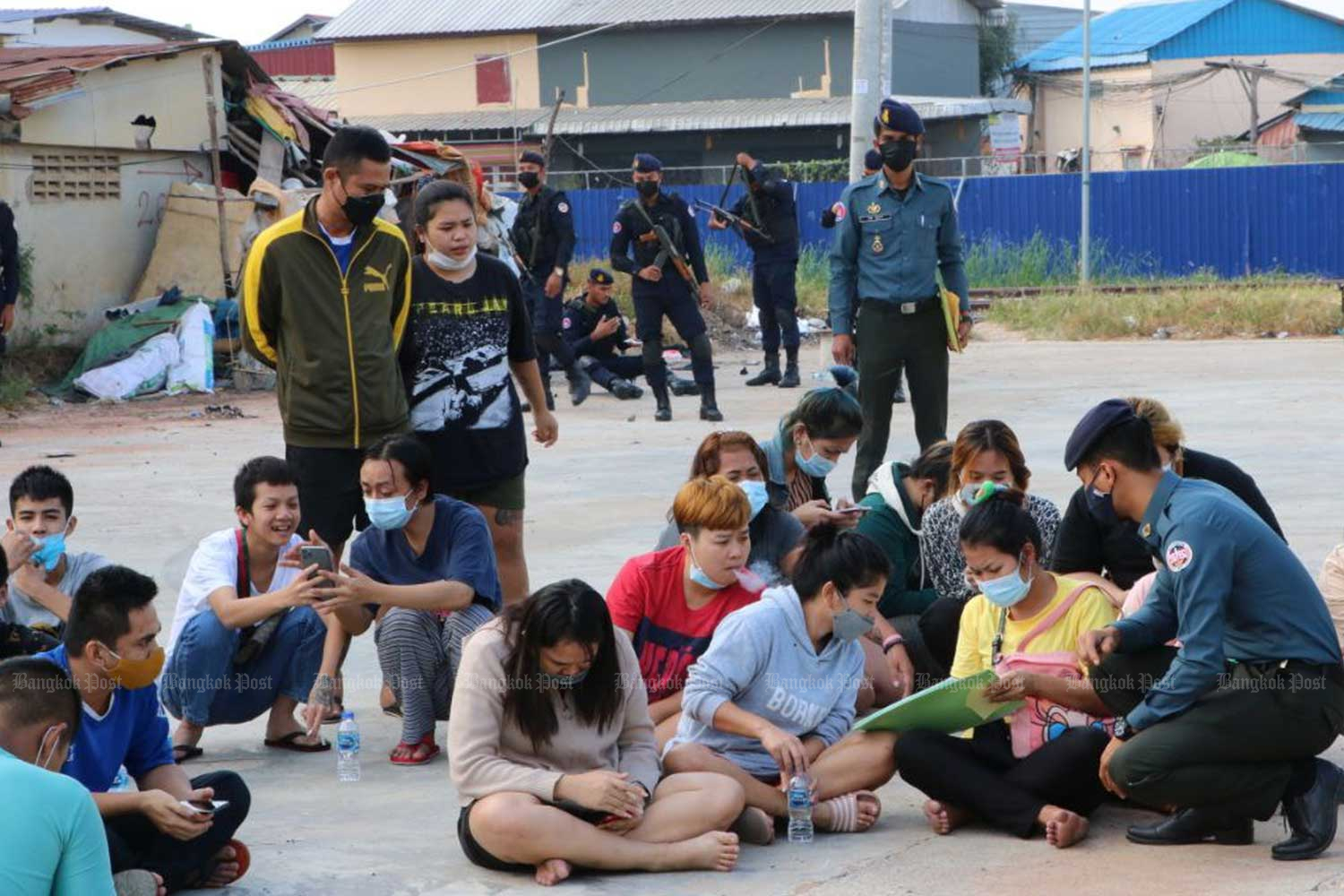 Some of the 39 Thais caught during raids in Phnom Penh and Sihanoukville for their alleged involvement in phone scams are being processed to be sent back to Thailand via Sa Kaeo province on Thursday. (Photo: Wassayos Ngamkham)

The money ended up in bank accounts in Phnom Penh. Since September, 60 Thais had fallen victim to the scammers with damage amounting to over 73 million baht, said Pol Maj Gen Phanthana.

More than 100 million baht was found in these accounts. Since other victims might have complied with request but did not file complaints, the damage could top 200-300 million baht, according to the police.

Speaking after a meeting with top Cambodian officials in the afternoon, Pol Maj Gen Phanthana said Cambodian authorities agreed to send all Thai suspects in the afternoon to face charges in the kingdom via the border checkpoint in Sa Kaeo.

The national police chief has asked the Immigration Police to take drastic again against those involved in phone scamming and arrest warrants would be issued for them.

An initial investigation found that the suspects had illegally crossed the border to Cambodia via natural border crossing to work with gangs believed to be operated by Chinese nationals, said Pol Maj Gen Phanthana.

Mr Phayakkhaphon, one of the suspects, had been assigned to transfer money swindled from victims to the bank accounts of the scamming network, he said.

Thai authorities have confiscated all bank accounts linked to scammers for examination and their assets would later be seized, he said.