FILE PHOTO: A merit-making ceremony is held at Wat Koh Suvarnaram in Sai Mai district of Bangkok on Sept 18, 2021 for people who died from Covid-19 and were cremated at the temple. (Photo: Arnun Cholmahatrakool)

There were 3,089 cases in the general population and two among prison inmates.

On Monday, 2,688 Covid-19 patients were discharged from hospitals after recovering from the coronavirus.

The Centre for Covid-19 Situation Administration (CCSA) said in the afternoon that all 12 new fatalities were Thais between the ages of 61 and 98 years old.

Bangkok and the adjacent provinces of Pathum Thani, Samut Sakhon, Samut Prakan, Nakhon Pathom and Nonthaburi had no new deaths.

Kanchanaburi, Buri Ram, Lampang and Pattani registered two fatalities each, while one death was recorded in each of Chachoengsao, Rayong, Nakhon Ratchasima and Satun.

Although the country logged the fewest deaths since April last year, the number of new infections continued to inch back up due to the spread of the Omicron variant.

The Provincial Public Health Office in Chon Buri said most new cases in the province were detected in Bang Lamung, the district that includes Pattaya. The eastern province logged only 191 new cases on Dec 29 but the figures have spiked since then.

Public health officials in Chon Buri said earlier that factories were the main source of the virus spread in the province.

The CCSA on Tuesday did not provide figures on imported cases.

On Monday 33,505 people received Covid-19 treatment at hospitals, including 555 seriously ill patients and 151 dependent on ventilators.

The death toll stood at 21,750 since the beginning of the pandemic. 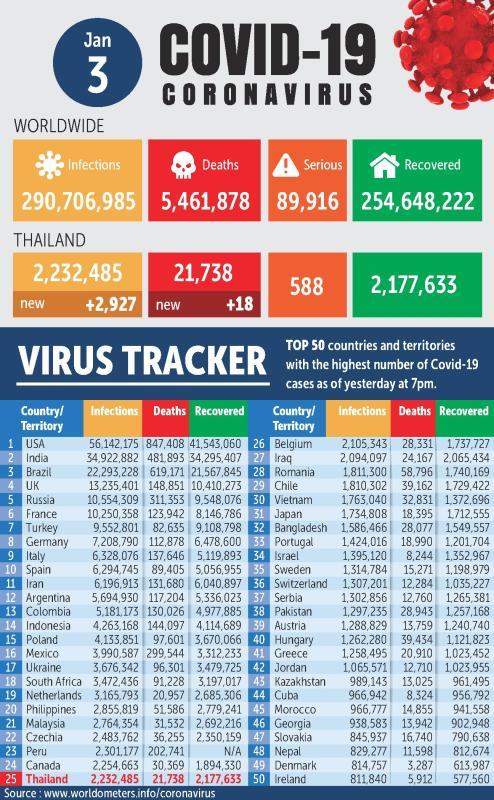