How high will the cost of pork soar?
Thailand
General

A woman buys food at Trok Mor Market near the Ratchaborpit Pattana community in Bangkok. Many people are stocking up on food as they prepare for Chinese New Year despite the rising cost of food such as pork and eggs.  (Photo: Apichart Jinakul)

The outbreak of African swine fever (ASF) has put a strain not just on the meat industry, but also consumers, who have had to spend more money to buy pork products, whose prices have soared to record highs. Authorities have resorted to culling pigs in an effort to stem the spread of the disease, which has caused the population of breeding pigs to decline.

However, a shortage of breeding pairs will undoubtedly lead to more supply-related problems. The Bangkok Post spoke with a number of experts to get to the bottom of the matter.

How long will it take the government to rein in the soaring pork price?

According to the director-general of the Department of Livestock Development, Sorravis Thaneto, it will take between 8-12 months to bring the situation under control, because piglets that are locally available have to be at least six months old before they can be slaughtered.

The outbreak, however, has affected the total number of breeding pigs in the country, with culling ordered in areas where ASF has been detected.

Although the Ministry of Commerce has ordered the suspension of live pig exports to protect domestic supply, it will still be hard to find enough disease-free breeding pigs to meet market demand.

How many breeding pigs are there on the market?

Before the ASF outbreak, it was estimated there were 1.1 million breeding pigs in the market. That number has dropped to around 660,000 today. Meanwhile, the total number of pigs available in the market went down from an average of 20 million pigs to about 15 million pigs as of June last year.

This month, it was estimated there were only 10 million pigs available -- before the ASF outbreak, and Thais consume about 18 million pigs each year. 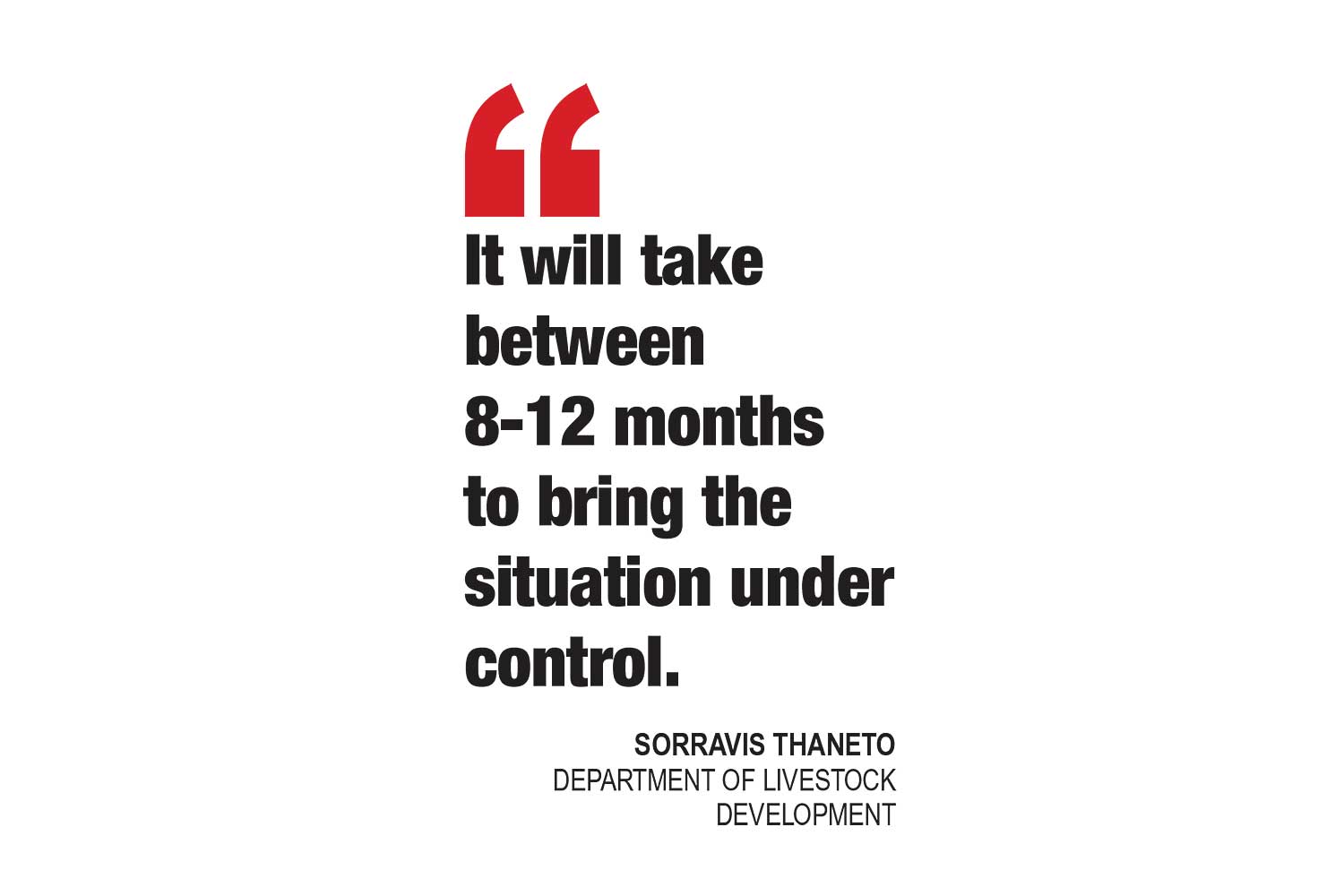 How has the high pork price affected other consumer goods?

When the price of a product goes beyond its normal range, consumers will look for other alternatives, which would consequently push the prices of those products up. As pork prices continue to rise, for instance, more consumers are switching to poultry -- the price of which has gone up by 4% from last year.

As the price of cooking palm oil has also gone up from 50 baht to 55-59 baht, many food vendors have been forced to increase their prices by at least five baht.

Market prices for beef remain unchanged, while freshwater fish prices have seen a drop of 6.8%.

Which farms have been worst hit by the disease?

The Department of Livestock Development said the outbreak has caused the number of pig farmers to decline from over 200,000 down to around 80,000 today.

Farmers with small-scale operations were the hardest hit by ASF, as they have a limited budget to continue their business during the Covid-19 pandemic and an ASF outbreak -- even after the soft loans extended by the government meant to cushion the economic blow of the disease.

While large-scale farms are likely to lose more animals in the event of an outbreak, they are more likely to be well-financed to weather the storm and capable of investing in added health measures to protect their herds.

Have authorities explained why they were so slow in detecting ASF?

The Department of Livestock Development has yet to come up with an explanation for its slow response to the outbreak, despite repeated pleas from affected farmers.

Indeed, the department had only just started acknowledging that ASF has already spread in the country, after cases were confirmed in Nakhon Pathom and Ratchaburi. It had previously insisted that the pig deaths around the country were caused by Porcine Reproductive and Respiratory Syndrome (PRRS), Classical Swine Fever (CSF) and Porcine Epidemic Diarrhoea (PED).

A Kasetsart University academic said the department concealed the outbreak to avoid sending a big shock through the market.

What is the government planning to do to help pig farmers?

Commerce Minister Jurin Laksanawisit said that the cabinet will introduce a 30-billion-baht low-interest loan programme to help affected farmers. The Ministry of Finance will work on the details and the loans will be provided by Bank for Agriculture and Agricultural Cooperatives.

The Department of Livestock Development will supply 300,000 piglets per week to small-scale farmers. The Commerce Ministry has also ordered a moratorium on live pig exports, which it expects to increase the number of pigs in the market by one million.

Should import taps be opened to help drive pork prices down?

A group of economic experts from Kasetsart University warned that the price of pork may reach up to 300 baht per kilogramme if the government doesn't intervene soon.

They suggested that the government bring in at least 27,000 tonnes of pork from the European Union (EU) each month to meet the domestic demand.

However, this should only be considered as a stop-gap measure as it will have an adverse impact on small-scale farmers in the long run.

A group of pig farmers has rejected the idea, saying it will destroy the local industry since pig raising in Thailand costs more than in the EU.

Is the crisis an opportunity to introduce alternative meat to the table?

The Department of Health under the Public Health Ministry is touting crocodile meat as an alternative to pork, which has caused demand for farmed crocodile meat to increase among consumers.

The meat is known to be versatile and can be used in various preparations, including barbecues, stir-fries and stews.

However, most people still view crocodile meat as an exotic meat, so it is unlikely that it will replace pork on the dinner table.