CAIRO: Thailand and Saudi Arabia agreed on Tuesday to exchange ambassadors in the first high-level meeting between the two countries since a row over a jewellery theft nearly three decades ago led the Gulf state to downgrade ties.

Saudi Crown Prince Mohammed bin Salman and visiting Prime Minister Prayut Chan-o-cha agreed on the appointment of ambassadors "in the near future" and to strengthen economic and trade relations, said a joint statement on Saudi state media. 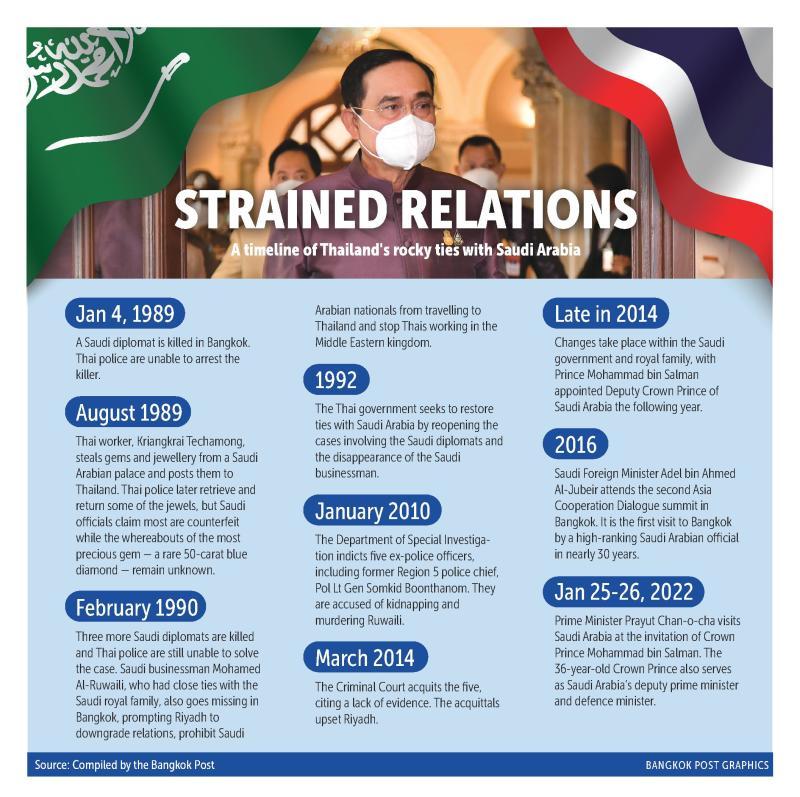 Saudi Arabian Airlines announced in a Twitter post on Tuesday that it would restart direct flights to Thailand in May.

Saudi Arabia downgraded relations with Bangkok after a diplomatic row over a theft in 1989 of around $20 million of jewels by Kriengkrai Techamong, a Thai janitor working in the palace of a Saudi prince, in what became known as the "Blue Diamond Affair".

A year after the theft, three Saudi diplomats in Thailand were killed in three separate assassinations in a single night.

The statement said Gen Prayut expressed "sincere regret over the tragic events in Thailand between 1989 and 1990" and said his government was ready to "raise cases to the competent authorities in the event of new, relevant evidence".

The theft of the jewels remains one of Thailand's biggest unsolved mysteries and was followed by a bloody trail of destruction that saw some of Thailand's top police generals implicated.

A large number of the gems, including the rare blue diamond, are yet to be recovered.

In 2014, The Criminal Court dismissed a case against five men, including a senior police officer, charged with murdering Saudi businessman Mohammad al-Ruwaili, who disappeared one month after witnessing one of the shootings of the Saudi diplomats.

Thailand has been eager to normalise ties with oil-rich Saudi Arabia after the spat that has cost billions of dollars in two-way trade and tourism revenues and the loss of jobs for tens of thousands of Thai migrant workers.

View the official statement of PM Prayut's visit to the Kingdom of Saudi Arabia at www.mfa.go.th/en/content/thailand-saudi-arabia-joint