Oil washing up on Mae Ramphueng beach in Rayong could be the “nail in the coffin” for hotels and restaurants already brought low by the pandemic, local hospitality business operators said on Saturday.

The navy and pollution experts are scrambling to clean up the mess created by the spill that took place in the Gulf of Thailand on Tuesday after at least 60 tonnes of crude leaked from a pipeline about 20 kilometres off the coast.

Crews in yellow plastic protective suits fanned out along the beach on Saturday afternoon to start cleaning up the oil slick that began washing ashore late Friday night.

Star Petroleum Refining Plc (SPRC), the operator of the undersea pipeline that leaked, said it was trying to minimise the amount of oil reaching the shoreline by using booms.

An aerial surveillance aircraft is monitoring the slick on the sea. A 47-square-kilometre area was affected before the slick drifted to the shoreline late Friday, a satellite image from the government’s Geo-Informatics and Space Technology Development Agency showed.

Marine scientist Thon Thamrongnawasawat said the oil slick was expected to continue to wash up on shore over the coming days due to stronger winds.

For struggling resorts and tourism-dependent businesses at Mae Ramphueng beach and the surrounding area, the pollution and lack of swimmers could spell disaster for livelihoods.

“There have been fewer customers because of Covid-19 and the lethargic economy and now the oil spill is like a nail in the coffin,” said Korn Thongpiijit, 45, who manages the Barnsabhaisabai Resort, which is situated right next to where authorities have set up a clean-up operation.

“We already reduced accommodation prices by 50% because of Covid-19 for survival.”

Bhorn, the owner of a nearby seafood restaurant, said most of her wild-caught seafood came from local fishermen and already customers were phoning up worried about the situation.

“Our income has dwindled by more than 50% since Covid-19 started,” she told AFP, adding she is waiting to assess the impact.

A dozen ships are spraying dispersant chemicals and so far more than 80,000 litres have been used over the affected area, the Royal Thai Navy said on Saturday.

SPRC said divers had found a failure in a flexible hose that formed part of the undersea equipment around a single-point mooring — a floating buoy used to offload oil from tankers.

A pipeline leak in the same area in 2013 led to a major slick that coated a beach on neabry Koh Samet.

There are fears that Koh Samet National Park could be affected by this spill, which could take more than a month to clean up.

Mae Ramphueng beach has been declared a disaster area as the clean-up proceeds, with about 150 SPRC workers and 200 navy personnel deployed as part of the effort.

The main oil mass is still offshore with only a small amount washing up on at least two spots along the 12-kilometre-long beach, the navy said.

Twelve navy ships and three civilian ships along with a number of aircraft were also working to contain the spill at sea with booms and dispersant spray.

“We and the company are still working at sea to reduce the amount of oil by cornering the spill and sucking up the oil and spraying dispersant,” Rear Adm Artorn Charapinyo, deputy commander of the First Naval Area command, told reporters. 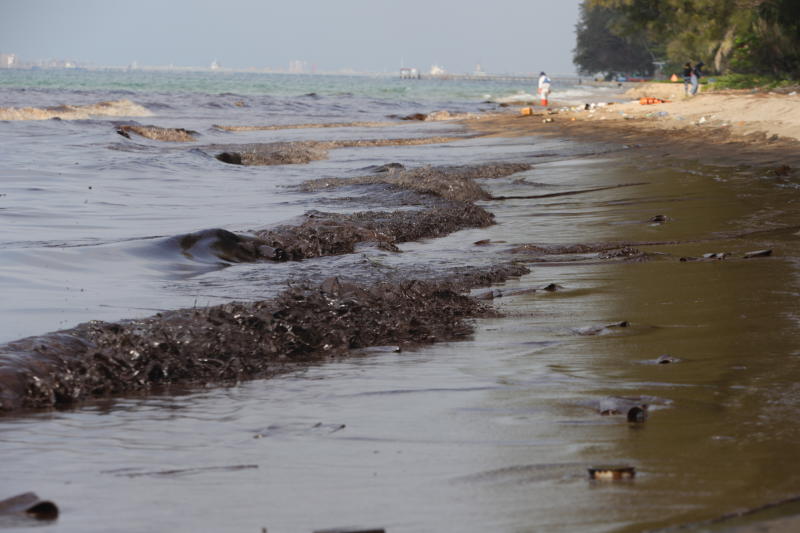 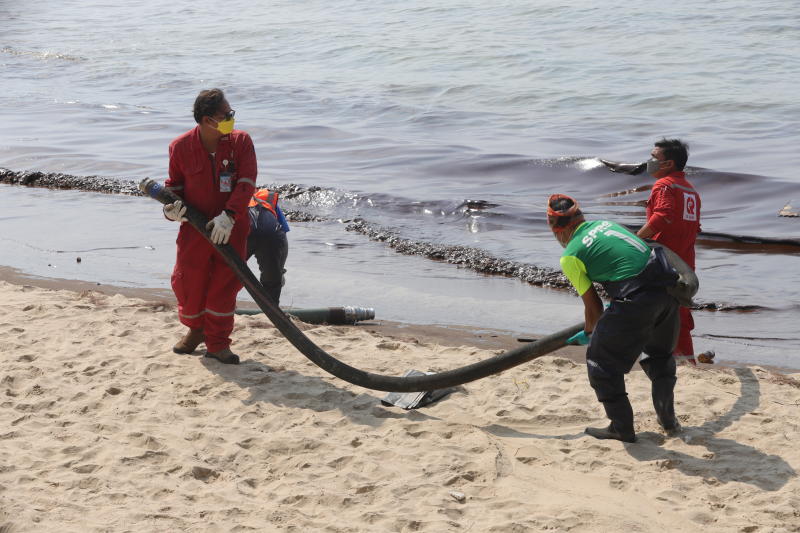 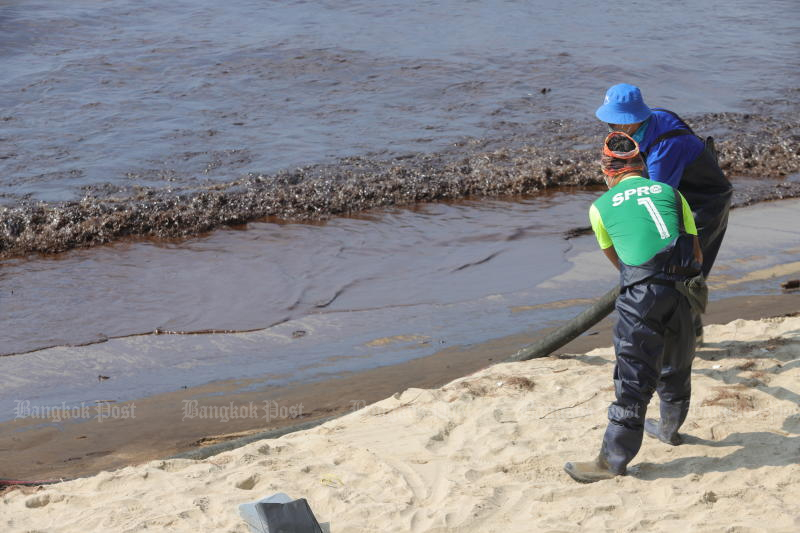 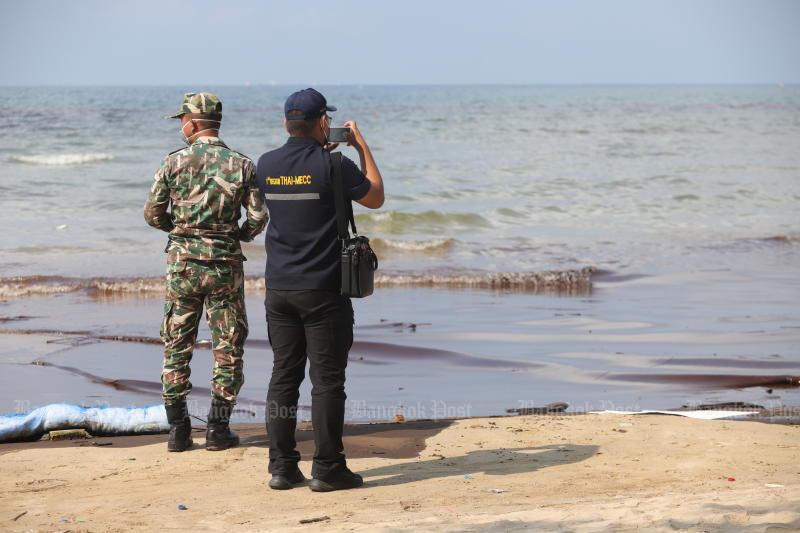 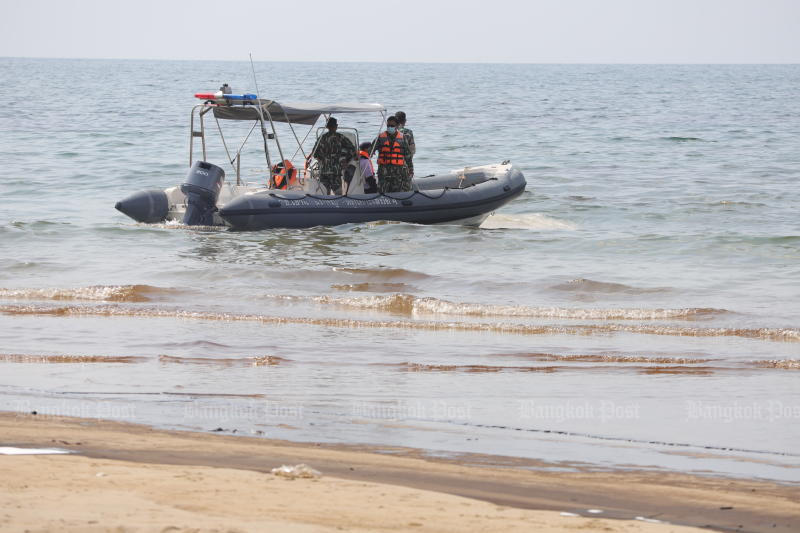 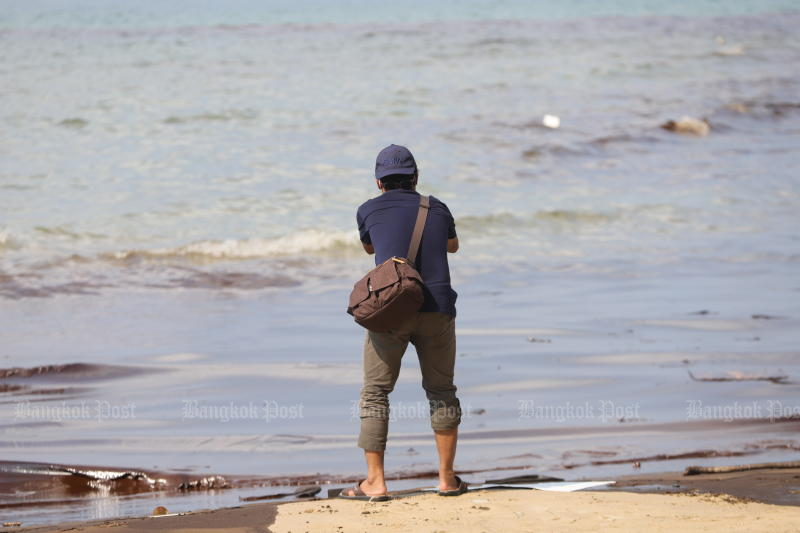