National park rangers take an injured man to a hospital following a tiger attack in a forest in Khao Laem National Park in Kanchanaburi on Friday. (Photo: Piyarat Choncharoen)

KANCHANABURI: A Karen tribal man was badly injured and two dogs killed in an attack by three tigers in a forest in Thong Pha Phum district, national park officials said on Saturday.

The attack on Friday prompted officials of Khao Laem National Park to ban entry to forested areas near Pilok-Samathor creek and nearby forests for 90 days for safety reasons.

The victim of Friday’s attack was a local resident, identified as Wan, 46, a Karen man with no ID card, said Niphon Chamnongsirisak, director of the Protected Area Regional Office 3 (Ban Pong).

The victim, who lived in tambon Pilok in Thong Pha Phum district, had left his village around 9am on Friday to round up his nine buffaloes that were grazing in the Samathor forest inside Khao Laem National Park, about 4-5 kilometres from his home, said Mr Niphon.

Mr Wan, accompanied by three dogs, was in the forest around noon when he saw three tigers rushing towards him. He was attacked but managed to climb a tree to escape them. But two of his dogs were attacked and killed, said Mr Niphon.

After the tigers retreated, the injured villager climbed down from the tree and rode on a buffalo to get home. Along the way, he met a friend and sought help. He was taken to the village and notified the village head, who alerted authorities. 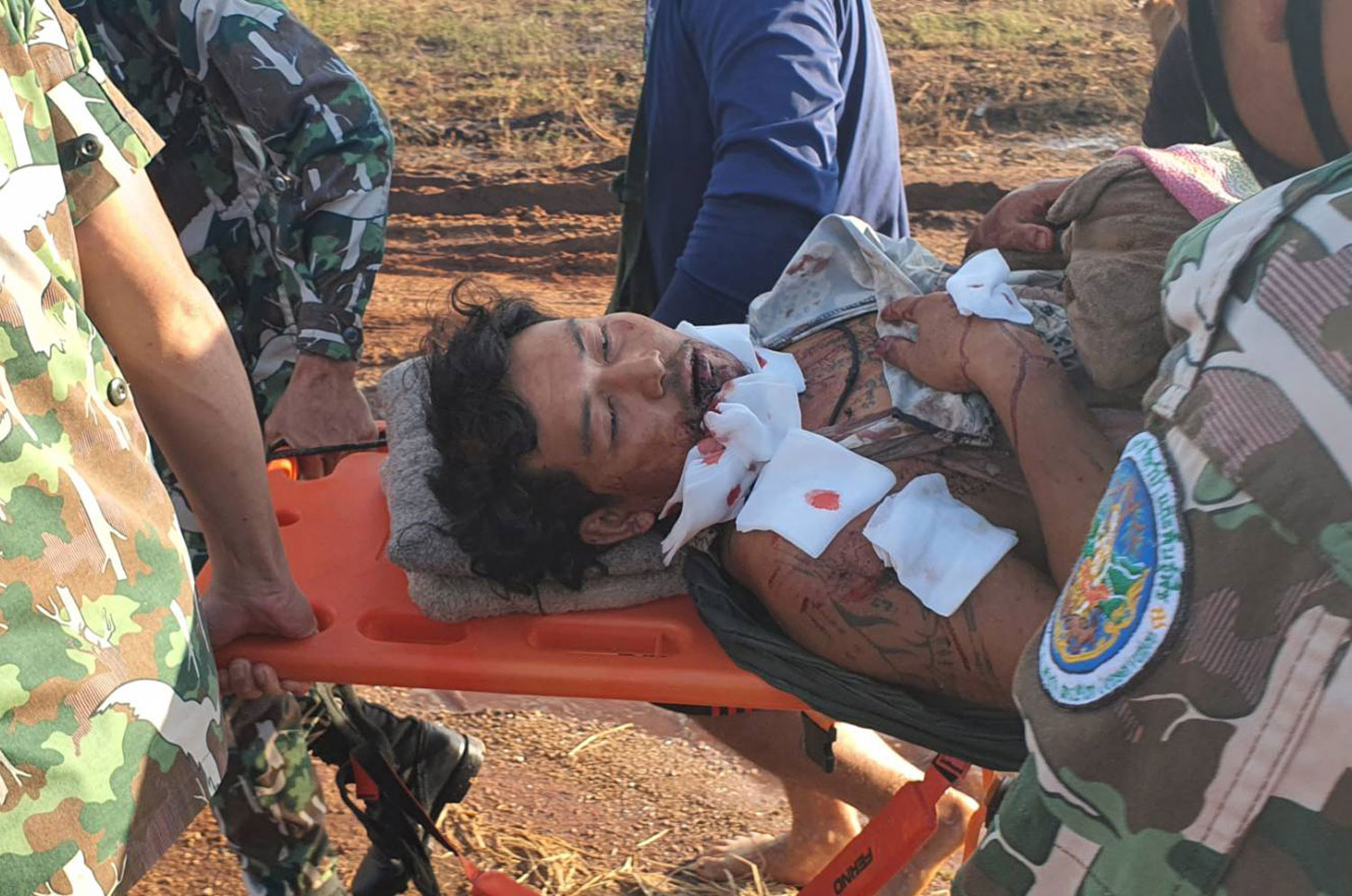 National park rangers carry Wan, 46, away from the scene of the tiger attack that left him with multiple wounds. (Photo: Piyarat Chongcharoen)

Mr Wan sustained around 20 wounds, some of them serious, to his neck, hands, arms, legs and face and was being treated at Thong Pha Phum Hospital, said Mr Niphon.

After the attack, Khao Laem Natinal Park deployed about 10 rangers to inspect the scene and guard the area to prevent the animals from attacking local residents.

For now, residents are not allowed to enter forested areas in the two national parks. In case of necessity, they need permission from the park chiefs, and will be escorted by rangers, said Mr Niphon.

National park authorities have provided 10,000 baht in initial assistance to the family of the victim. Ms Porkalee, 33, wife of Mr Wan, received the money on Saturday.

Friday’s incident happened just three weeks after the discovery, also in Thong Pha Phum district, of the pelts of two Indochinese tigers along with weapons and other items at a campsite near the Thailand-Myanmar border.

Five suspects managed to flee, leaving meat from the tigers on a grill. All five men later surrendered to police to face charges. They claimed the tigers had preyed regularly on their cattle, so they used a dead cow the big cats had killed as bait and shot them with borrowed guns, according to police.

There were reports that soldiers of the Karen National Union (KNU) had alerted local residents in tambon Pilok that five tigers that they used to spot at Khao Krathing mountain on the Myanmar border near Pilok Khi village had disappeared from the area.

The wild animals were believed to have migrated to search for food in forested areas in Thailand. After news about the deaths of the three tigers, KNU soldiers warned local residents to be more careful about the remaining tigers that might come to attack them and their animals.

Thai parks officials said last year that there were 177 Indochinese tigers left in the wild in the country, an increase from 160 a year earlier. They attributed the significant upturn in breeding to success in protecting the species over the past decade.

However, the increasing tiger population also means the animals might be roaming farther from their usual areas in search of food.

Indochinese tigers are also found in Myanmar, Laos, Vietnam, Cambodia and southwestern China. The total population may only be around 350, according to the World Wildlife Fund. 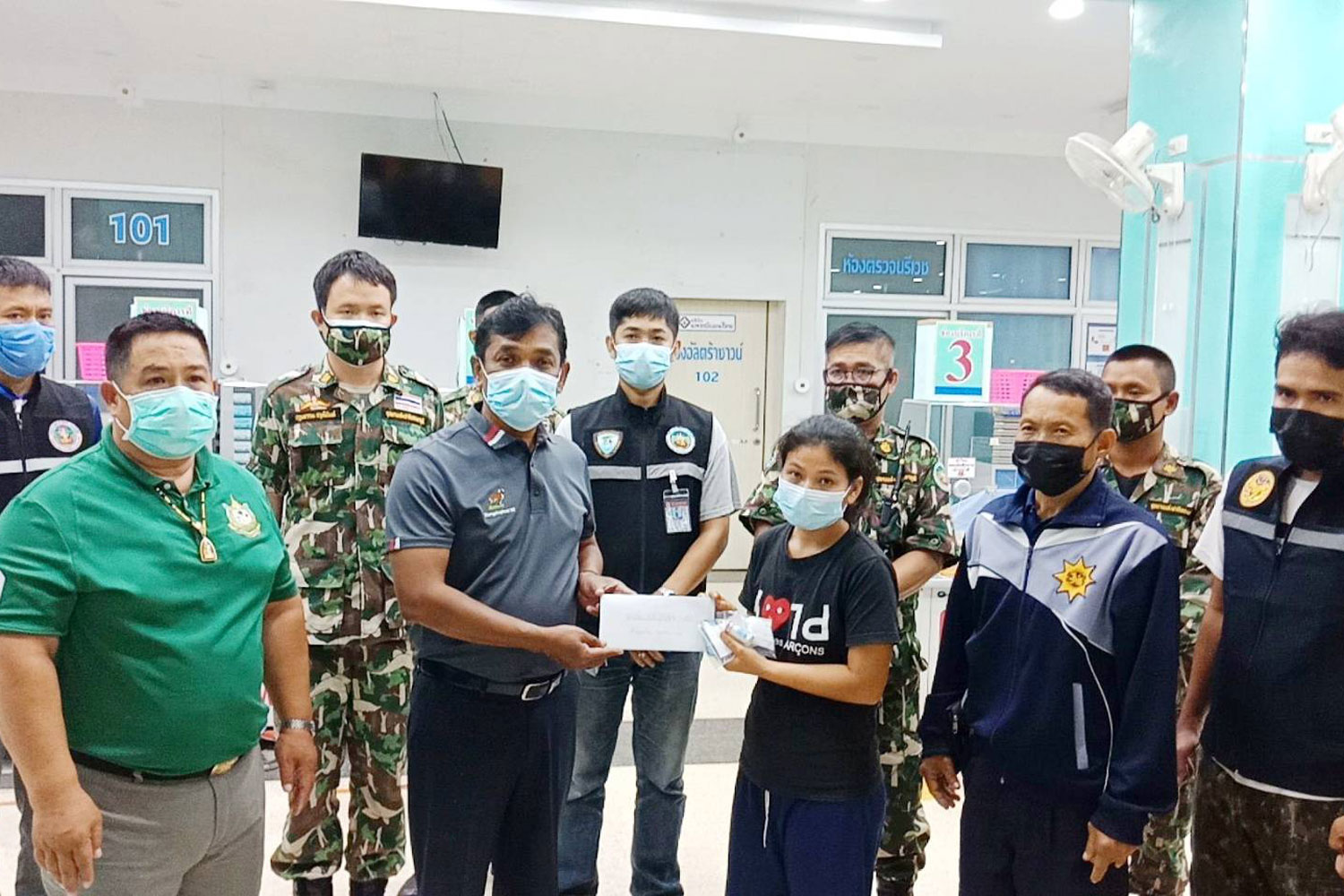