People, some in full protective gear, queue up to check-in for their flights at Suvarnabhumi airport on Monday. (Photo: Wichan Charoenkiatpakul)

The "Test & Go" programme for fully vaccinated travellers resumes on Wednesday with travellers required to take an extra RT-PCR test on the fifth day of arriving and to wait for the test result at their hotel or face tough legal consequences.

The scheme, in which visitors must spend one night in a certified hotel while they wait for the result of their first RT-PCR test taken on arrival, was suspended in response to growing concerns about the Omicron variant of Covid-19.

Taweesilp Visanuyothin, spokesman for the Centre for Covid-19 Situation Administration (CCSA), said on Monday the registration for the revised Test & Go programme, which is open to visitors from all countries, will resume on Tuesday with extra measures.

"Travellers must take the standard Covid-19 test on the first and fifth days of arrival and must show proof of hotel bookings for these two nights at any hotel that has a partner hospital," he said.

He also said the sandbox scheme has been designated a contingency plan.

Travellers are also advised to make sure their Covid-19 or health insurance covers related costs otherwise they will have to absorb all the expenses themselves, Dr Taweesilp noted.

He said the Test & Go programme has been revised for precautions against the virus and to help tourism operators.

On Jan 22, some visitors disobeyed disease control measures, he said. Most cases involved them failing to stay at designated places so they could not be located when their test results came back positive.

The first month saw a total of 185,037 visitors arriving and 6,802 tested positive for Covid-19, according to Dr Taweesilp. 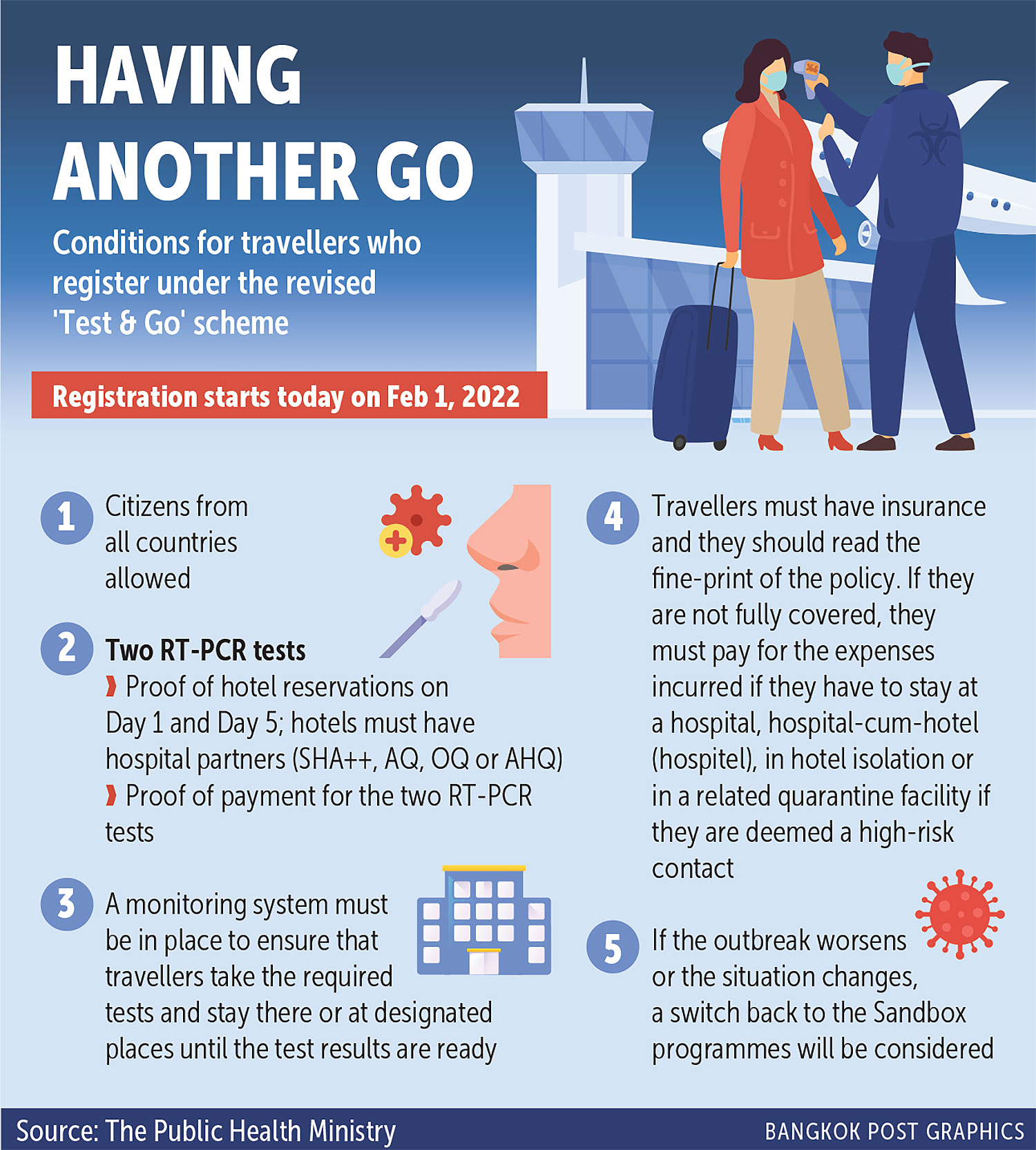 He said visitors must comply strictly with requirements and other disease control measures or face legal action including a fine of up to 20,000 baht if they are repeat violators.

"Tourists must obey Thai laws. Penalties in other countries are much harsher," he said.

According to Dr Taweesilp, in Singapore, visitors who fail to isolate themselves at designated places or wear face masks face up to six months in jail and can be fined as much as S$10,000 (245,800 baht).

Maratee Nalita Andamo, director of the News Division of the Department of Information with the Foreign Ministry, said the Thailand Pass system will openly begin accepting registration on Tuesday for travellers entering via the Test & Go scheme.

She also pointed out that the Thailand Pass system, launched on Nov 1 last year, has never closed as it is used for other entry programmes.

While travellers will have to book a hotel and take a mandatory test on the first and fifth days, they may book different hotels, she said.

Travellers cannot travel immediately after registration and they are advised to plan their trip at least seven days in advance as hotel bookings and vaccine certificates need to be verified, she noted.

"If visitors are in Thailand for less than five days, they only need the booking and testing on the first day and provide their departure information in the Thailand Pass system," she said.

Ms Maratee also said there had been no breach of the Thailand Pass security system following reports about spam emails with a link or QR Code containing a malware virus sent to those who registered for Thailand Pass.

She said the emails were sent from a fake account but noted that they could compromise the privacy and security of recipients who clicked on the attachment.

Government spokesman Thanakorn Wangboonkongchana said on Monday that the government is ready for the resumption of the scheme. He said the Public Health Ministry has worked closely with the Tourism Council of Thailand in revising disease control measures and drawing up a response plan if the outbreak worsened.

He said the number of tourist arrivals this month will be around 200,000-300,000, close to the number in December. This number is likely to pick up in March.

According to the spokesman, Prime Minister Prayut Chan-o-cha has emphasised the promotion of the country's soft power initiatives to draw international tourists.

Thailand's soft power efforts include food, sports, films, music and performing arts and these can be used to promote the country's image and generate income, he added. "Gen Prayut has stressed the use of soft power and revised tourism strategy to support 'wellness tourism' because it is the potential market for the country," he said.

Citing The Washington Post, he said Thailand remains a favourite destination among American tourists interested in health and wellness tourism.