A woman is found hiding under a stairway in the abbot's quarters at Wat Bang Ya Phraek in Phra Pradaeng district, Samut Prakan, on Wednesday night. (Photo: Sutthiwit Chayutworakan)

SAMUT PRAKAN: Angry local residents found a woman without underwear hiding, shivering under the stairs in the abbot's residence at a temple in Phra Pradaeng district on Wednesday night.

About 100 people who live near Wat Bang Ya Phraek in tambon Bang Ya Phraek stormed up to 65-year-old Phra Samut Prasartporn Mahapunyo's two-storey living quarters about 8.30pm.

They were angered by reports that a woman had entered the place earlier that evening and had not left.

The abbot refused to open his door to the mob until police arrived and persuaded him to stand aside.

The abbot showed them the inside and insisted there was no woman there with him. He took people up to the second floor where he slept.

Then reporters spotted an elastic hairband on the abbot's bed and asked him to explain. The abbot said he used it to relieve headaches, and showed them how.

Back on the ground floor, people noticed a blue bra on the floor under the stairs, close to a rack covered with the abbot's robe. When the robe was removed, they found a woman crouching there, tight-lipped and shivering, her face pale.

People turned on the abbot and the woman, angrily cursing them. Police summoned reinforcements to help escort the couple out of the abbot's living quarters. Bottles of liquor were also found on the premises.

The abbot was escorted to Wat Song Tham where he was expelled from the monkhood and then taken to Samrong Tai police station for questioning.

Station chief Pol Col Jakrapong Nutpadung said the abbot admitted to living with the woman at night and had agreed to leave monkhood. 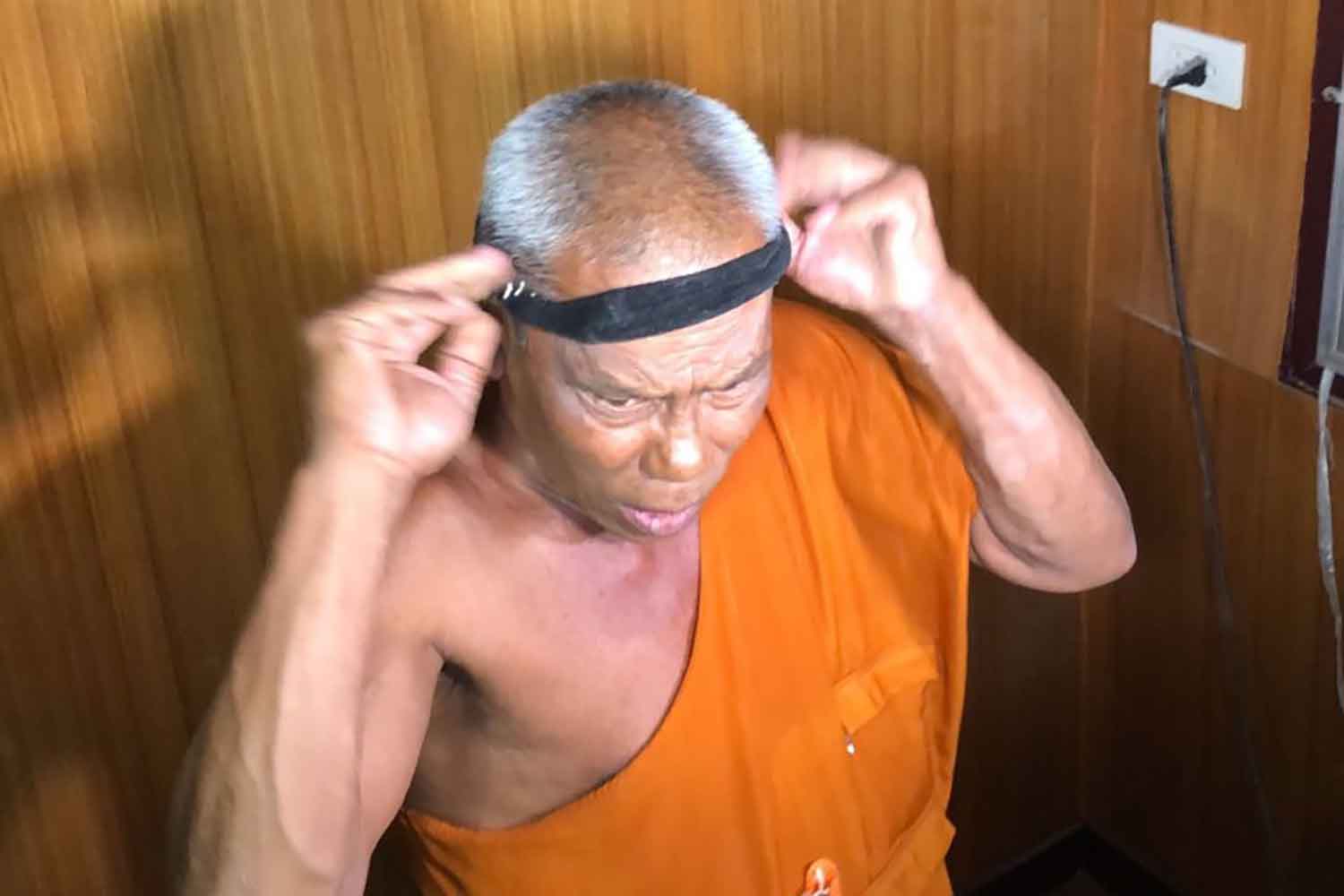 Expelled abbot Phra Samut Prasartporn Mahapunyo, 65, demonstrates how he used a  woman's hairband to relieve his headache, just before he was caught red-handed with a semi-naked woman hiding under the stairs. (Photo: Sutthiwit Chayutworakan)