Govt to assist Thais in Ukraine

Evacuation centre set up in Ukraine's city of Lviv

A group of people gather outside the Russian embassy in Bangkok on Friday, calling for an end to the invasion in Ukraine. (Photo: Pornprom Satrabhaya, Bangkok Post)

The government has set up an evacuation centre in Ukraine's western city of Lviv to assist Thai nationals as the Russian military attacks the country.

Government spokesman Thanakorn Wangboonkongchana on Friday said Prime Minister Prayut Chan-o-cha has instructed the Foreign Ministry and other related agencies to devise plans in response to the worsening situation.

Since Ukraine has closed its airspace, using aircraft to evacuate Thais is not an option so other alternatives are being considered such as sending a charter flight to take Thais who crossed the border from Ukraine to Poland or other nearby countries back to Thailand, Mr Thanakorn said. 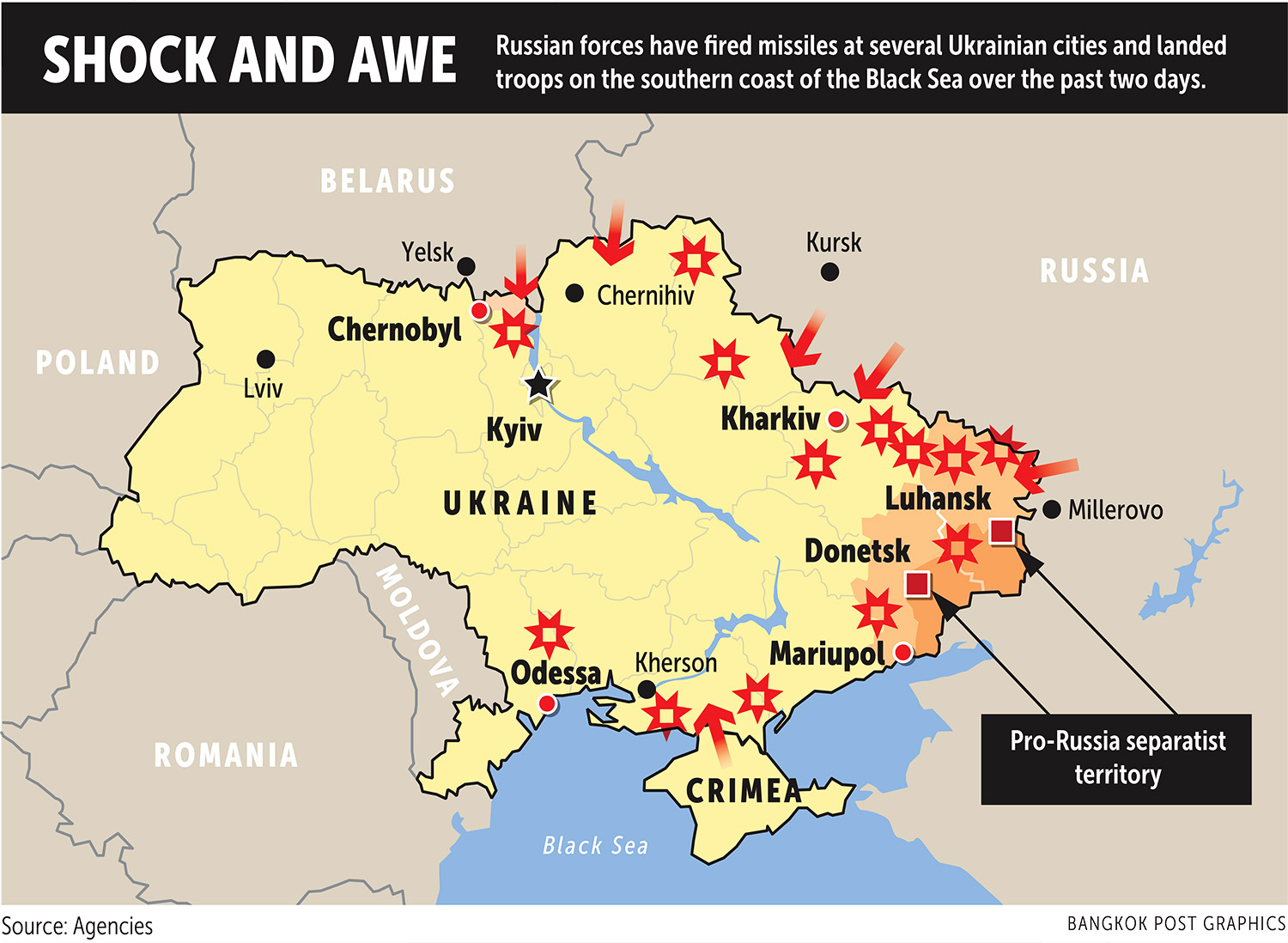 "The prime minister has been concerned about Thais and ordered relevant agencies, particularly the Foreign Affairs Ministry, to do their best to take care of them," Mr Thanakorn said.

The ministry instructed the Thai embassy in Warsaw, Poland, to set up an operation centre in Lviv to coordinate efforts with Ukrainian authorities to evacuate Thai nationals. Embassy officials will also be sent to the centre.

The centre will also serve as a temporary shelter for Thais fleeing other cities at risk of being caught in the conflict, according to the ministry.

Lviv will serve as a base where Thai people will be gathered before they are transported further until they are flown back to Thailand, according to the ministry.

There are some 253 Thais in Ukraine, and most of them are spa workers or massage therapists, the ministry said.

The embassy is also trying to keep in touch with Thai business operators in Ukraine while vehicles will be arranged to take Thais from other Ukrainian cities to Lviv, the ministry said.

The highly volatile situation in Ukraine has prompted numerous people to flee at-risk areas in their cars as some inter-city roads have been closed while public transport such as trains and aircraft, has been suspended, according to the ministry.

Charter bus operators in Ukraine and Poland have been reluctant to provide services due to the fighting, the ministry said.

However, the Thai embassy in Warsaw is trying to do everything it can to arrange buses to evacuate Thais in major cities in Ukraine, according to the ministry.

The Department of Employment has instructed its employment offices to suspend permission requests filed by workers seeking jobs in Ukraine. Permission to work in the country has been suspended until the situation de-escalates.