A medical worker administers a dose of a Covid-19 vaccine to a woman at the Thai-Japanese Youth Centre in Din Daeng district, Bangkok, on Thursday. (Photo: Bangkok Post)

This compared with the 41 coronavirus-related fatalities and 24,932 new cases reported on Friday morning.

The Centre for Covid-19 Situation Administration (CCSA) said on Saturday afternoon that the 40 fatalities were aged from 36 to 105 years, with the average age of 78. They were 23 men and 17 women. All were Thais.

Bangkok had three new deaths and there were five more in the adjacent provinces - two each in Nakhon Pathom and Samut Prakan and one in Nonthaburi.

The Northeast saw 10 more deaths – three each in Nakhon Ratchasima and Surin and one each in Buri Ram, Mukdahan, Nong Khai and Ubon Ratchathani.

The North reported six more fatalities – two each in Uttaradit and Chiang Mai and one each in Chiang Rai and Uthai Thani.

The South had eight more deaths – two each in Chumphon and Nakhon Si Thammarat and one each in Trang, Phangnga, Phuket and Surat Thani.

Other central plain provinces further from the capital recorded eight more cornavirus-related deaths – three in Ratchaburi, two in Chon Buri and one each in Phetchaburi, Rayong and Suphan Buri.

There were 25,260 new cases in the general population, 189 among prison inmates and 166 imported cases.

Of the local Covid-19 infections, 24,897 were confirmed at hospitals and 363 via mass testing.

The 166 imported cases included 24 from Russia, 23 from Myanmar, 13 from Singapore, eight each from Germany, Finland and France, seven each from Sweden and the United Arab Emirates and six each from Australia and the United Kingdom.

Vaccinations continued to progress, with 123.15 million doses administered as of Friday. 76.8% of the population have now received at one dose of the vaccine, 71.4% have received two shots and 28.8% a booster dose, according to the CCSA.

The highest number of Covid-related fatalities in a 24-hour period was 312 recorded on Aug 13. 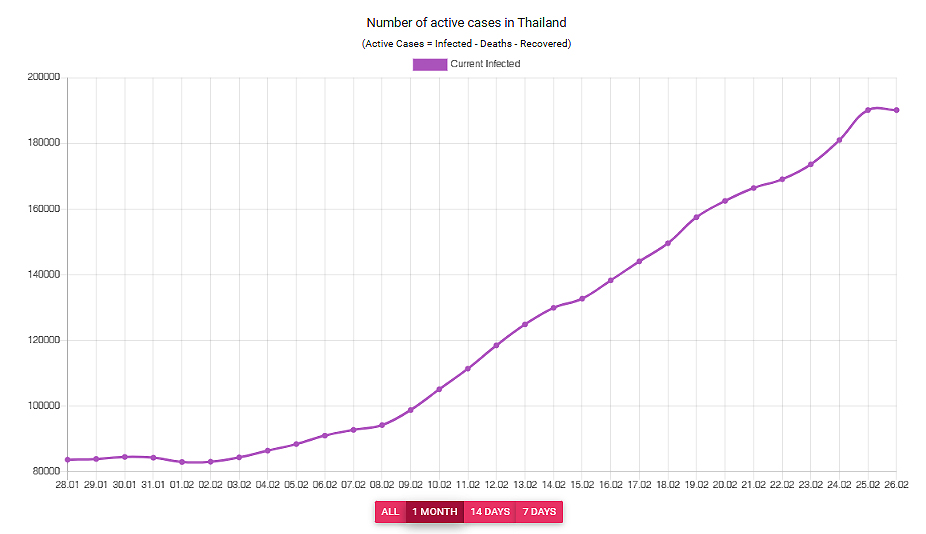