Fleeing for their lives from Ukraine
Thailand
General

Fleeing for their lives from Ukraine

A woman, wearing glasses, embraces her mother who was evacuated from Ukraine. She met her on Wednesday at the quarantine centre at the Bamrasnaradura Infectious Diseases Institute in Nonthaburi province. (Photo: Chanat Katanyu)

When Ramphan Laehwong, 33, was taking shelter in the subway system in the city of Kyiv on Feb 25 she heard that a building where her spa parlour was located was hit in an attack.

"We left the apartment and took shelter in the subway one day after the emergency situation was declared. We had been there about six hours when we learned the spa building was attacked," she said.

Ms Ramphan and 16 Thai workers decided to seek refuge in the subway after their employer told them to leave the city.

While they were holed up there they managed to contact the Thai embassy in Warsaw and were advised to get a train to the Thai help centre in Lviv.

"It was chaotic. People were fleeing for their lives and struggling to board the train. I abandoned everything to get on that train. I had just two items of clothes," said the Chiang Mai native who was among Thai evacuees to arrive from Ukraine on Wednesday.

She said she had the support and strength from her parents during the escape from Kyiv which took about 16 hours. 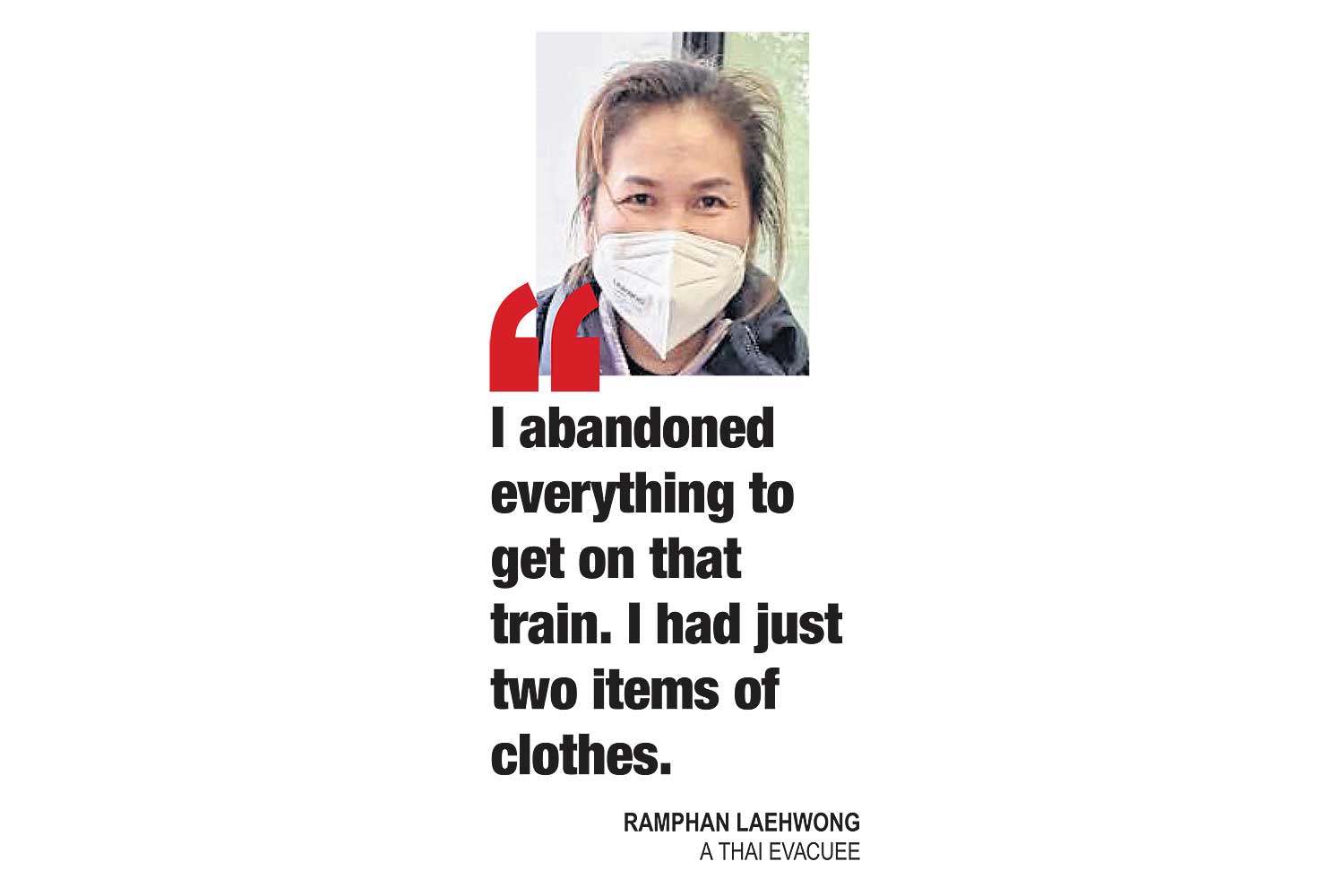 Aree Thumboon, 35, a native of Khon Kaen, said she felt lost when she could not get on the train on her first try. But with encouragement from her friends, she finally got on.

"They encouraged me to get on. It wasn't safe to wait for the next one. I was lucky to have them," she said.

Ms Aree said she felt safe and grateful to be alive when the train arrived in Lviv and they were greeted by Thai officials.

For 46-year-old Suphap Pothiladao, it was the toughest journey home. The native of Maha Sarakham was staying in Odessa in the southern part of Ukraine when the invasion began.

Although she did not live close to the combat zone, the sound of the first blast left her weak at the knees. With the option to leave, Ms Suphap did not hesitate and the plan was to cross the border by sea to Romania's capital of Bucharest where she would board a flight home.

She left in the morning by car, heading to the port, but as bridges and roads were cut off by explosions the trip took longer than expected. Then her car was held up at a checkpoint.

After her documents were checked by officials, she continued on foot for two kilometres to get to the port. It took four hours to reach Romania where she was greeted by Thai officials.

She described people's living conditions as difficult, taking shelter in doorways and struggling to find food. All Thai nationals have left Odessa, except those who have families there, she said.

Ms Suphap's group was the first group of Thai evacuees from Ukraine who arrived back in Thailand at 6.25am on Thai Airways International flight TG923 via Frankfurt.

The second group of 58 from Poland arrived on Emirates flight EK384 around noon.

The evacuees were given RT-PCR tests upon arrival at Suvarnabhumi airport and will be quarantined at Bamrasnaradura Infectious Diseases Institute in Nonthaburi province. Thirteen of them tested positive for Covid-19.

Another group of 40 Thais is scheduled to arrive on Thursday and 31 of them are workers.

Boonchob Suthamanaswong, the labour permanent secretary, said there were 139 Thai workers in Ukraine and about 100 had told the ministry they wanted to return home.

He said the Labour Ministry would give financial aid of 15,000 baht each to evacuees who were members of a fund to assist overseas workers and help them find new jobs.

Prime Minister Prayut Chan-o-cha has monitored the situation in Ukraine and instructed agencies to get help to Thai nationals who want to return home, said government spokesman Thanakorn Wangboonkongchana.

Quoting the Foreign Ministry, he said a total of 142 people were evacuated from Ukraine and two groups totalling 96 people were scheduled to arrive on Wednesday from Poland and Romania.

He said the Thai nationals still stranded in other cities in Ukraine were safe and another group of 35 were travelling to the operations centre for evacuation.

Meanwhile, the Foreign Ministry expressed concerns after it was reported that Thais showed up at the Ukrainian embassy to volunteer to fight Russian forces in Ukraine.

Ministry spokesman, Tanee Sangrat, made the comment after the Ukrainian embassy in Bangkok posted a notice on its Facebook page appealing to foreign citizens to help Ukraine oppose Russia's aggression.

However, he said the ministry could not contact the Ukrainian embassy for further details.