Pictures of Nida ‘Tangmo’ Patcharaveerapong are displayed at funeral prayers for the actress in Liberty Church Bangkok on Friday. (Photo by Nutthawat Wicheanbut)

Friends, fans and family members gathered in a Bangkok church on Friday for an emotional farewell to Nida “Tangmo” Patcharaveerapong on the first of three days of funeral prayers.

Even as the ceremony went ahead for the actress, who drowned on Feb 24, police are continuing with their investigations. They are examining new evidence that might counter their initial conclusion that her death was accidental.

About 1,000 mourners came to Liberty Church Bangkok in Saphan Sung district for the prayer service. The extravagant ceremony will be held until Sunday and all seats were fully booked days in advance, with the event broadcast live on the church’s YouTube and Facebook accounts.

The evangelical Christian church can accommodate 3,000 guests but the maximum number it is allowing for the event for Nida was 1,000 due to social distancing measures.

“We all know that Nida is a beloved daughter of God. The God has arranged a place for this daughter in heaven,” the church said in a message it posted.

Supachai Sriwichit recalled the happy times he spent with his “sister” when he arrived at the church.

“I come here as a brother to send my sister to heaven in a graceful event. I’m still thinking of the old days with her. We knew each other and worked together for more than 10 years and I will never forget those days,” he said before bursting into tears.

Mr Supachai, a manager for many superstars in the entertainment industry, has co-organised the farewell to Nida with actress Patcharapa “Aum” Chaichua.

Nida’s personal manager Idsarin “Gatick” Juthasuksawat went to the church in the early afternoon to present a bouquet of flowers. One of the people on the speedboat on the fateful night, she left the church in tears and refused to speak to reporters.

“You and I are more than friends. We are family,” Ms Idsarin wrote her farewell message posted at the church. 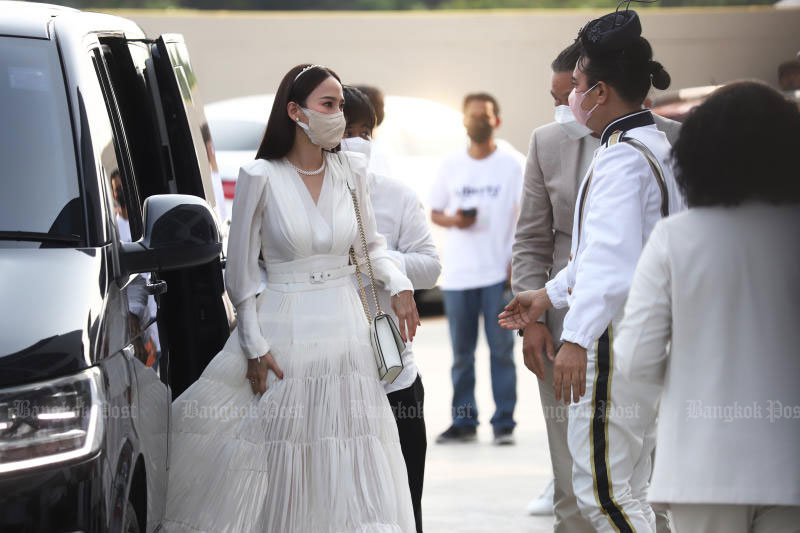 Actress Patcharapa “Aum” Chaichua talks to Supachai Sriwichit (second from right) after arriving at the church. The two organised the funeral prayers for Nida. (Photo by Nutthawat Wicheanbut)

Nida was plunged into the Chao Phraya River on the night of Feb 24 from a speedboat with five other companions on board. Her body was found two days later not far from where the incident that took place, near the Pibul 1 pier in Nonthaburi province.

When questioned initially, those on the boat said the actress was relieving herself from the back of the vessel and fell to the river. The toilet on the boat was said to have been out of order.

So far, boat owner Tanupat “Por” Lerttaweewit and the driver at the time, Phaiboon “Robert” Trikanjananun, have been charged with negligence and operating an unauthorised boat.

Mr Phaiboon, who was not an experienced boat driver, admitted to causing the boat to lurch, which threw Nida overboard to her death, according to police.

Police have said they did not find foul play but more evidence has been brought to their attention and they are looking at it. Posts have proliferated on social media along comments from people offering their own theories about what really caused the accident.

But Pol Lt Gen Jirapat Phumjit, commander of Provincial Police Region 1, said on Friday that there was still no substantial evidence showing the death was not accidental.

The chief investigator said police were waiting for more information before they wrap up the case. That includes the post-mortem results conducted at Siriraj Hospitals to compare with those from Police General Hospital, information from witnesses and other evidence, he added.