Saturday's figures did not include 20,385 positive results from antigen tests over the past 24 hours. If they were included, daily infections would total 44,977.

This compared with the 63 coronavirus-related fatalities and 24,792 new cases reported on Friday morning.

The Centre for Covid-19 Situation Administration (CCSA) said on Saturday afternoon that the 68 fatalities were aged from 11 months to 107 years, with the average age of 75. They were 38 men and 30 women. Sixty-seven were Thais and one with an unknown nationality.

Bangkok saw 12 new deaths and there were eight more in adjacent provinces – three in Samut Prakan, two each in Nakhon Pathom and Pathum Thani and one in Samut Sakhon.

Other central plain provinces further from the capital recorded 14 more fatalities – two each in Kanchanaburi, Nakhon Nayok, Rayong, Saraburi and Suphan Buri and one each in Chon Buri, Trat, Prachuap Khiri Khan and Ratchaburi.

The Northeast had eight new deaths – two each in Nakhon Ratchasima, Maha Sarakham, Si Sa Ket and one each in Loei and Buri Ram.

The North had seven new fatalities – two in Chiang Mai and one each in Phrae, Nakhon Sawan, Phayao, Uttaradit and Uthai Thani.

The South logged 19 deaths – six in Nakhon Si Thammarat, two each in Krabi, Trang, Phuket and Songkhla and one each in Chumphon, Narathiwat, Pattani, Ranong and Surat Thani. 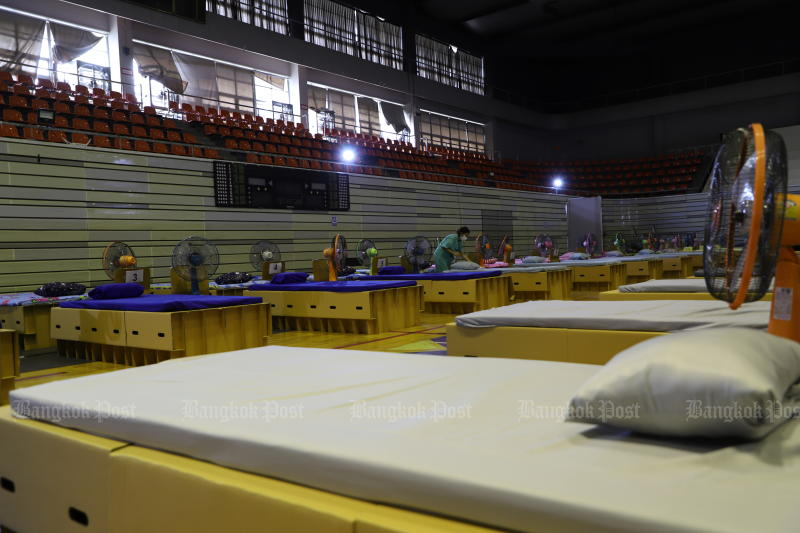 A community isolation facility is set up at the Thai-Japanese Stadium in Din Daeng district of Bangkok. (Photo: Apichart Jinakul)

There were 24,389 new cases in the general population, 151 among prison inmates and 52 imported ones.

Of the local Covid-19 infections in the general population, 23,712 were confirmed at hospitals and 677 via mass testing.

The 52 imported cases came from 21 countries and included nine from Singapore, five each from Cambodia and Myanmar, and four each from the United Kingdom, Hong Kong, France and Germany.

The 24-hour period also saw 21,371 Covid-19 patients discharged from hospitals after recovering from the coronavirus.

Vaccinations continued to progress, with 125.86 million doses administered as of Friday. 78.1% of the population have now received at one dose of the vaccine, 71.8% have received two shots and 31.1% a booster dose, according to the CCSA.

The 24-hour period also saw 21,371 patients discharged from hospitals after recovering from the coronavirus.

The death toll stood at 23,643 since the beginning of the pandemic, including 1,945 so far this year. 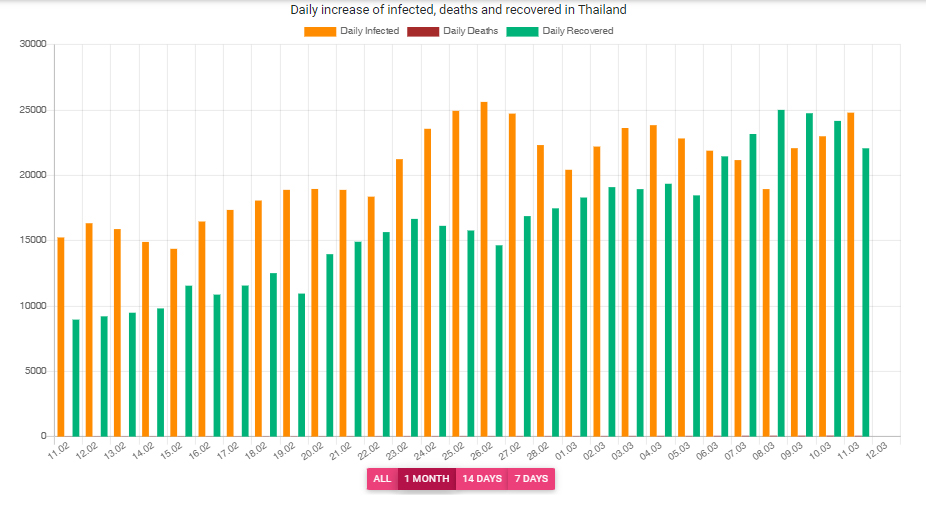