A boy plays with his pet cats as a pit bull is seen approaching the open sliding door of the house, in Kanchanaburi on Tuesday. (Screen capture from Nut Kmutnb Facebook page)

KANCHANABURI: Two young boys fled in terror as three pit bull dogs owned by a monk at a nearby temple broke into their home and later savaged and killed their pet cat on Tuesday.

Santi Kasinthuram posted a video of the incident on his Facebook page.

He said the pit bulls barged into his house through a sliding door while his sons, aged 6 and 8, were playing with their pet cats on Tuesday evening. Their grandmother was in the kitchen at the back of the house.

The two boys ran, screaming to safely, but one of the cats fled through an open window and was chased and bitten to death in the front yard, Mr Santi said.

In the video, several other dogs were also seen outside the house.

Mr Santi said he had filed a report at Muang Kanchanaburi police station but did not want to take legal action against anyone.

He said the temple abbot had previously admonished the monk, telling him to keep a close watch on the dogs, but he never listened.

"I just want the right agencies to help out and talk to the monk because there are about 10 pit bulls at the temple. If the dogs did not chase the cat, my sons could have been be in grave danger," Mr Santi said.

Police were to meet the monk who owns the pit bulls on Wednesday, to find ways to prevent them from attacking others in the future. 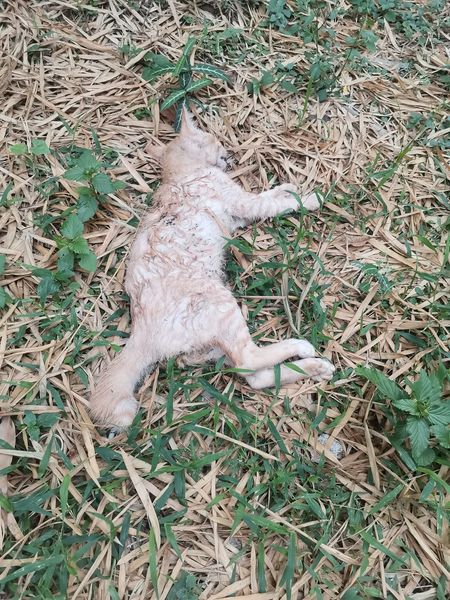 The pet cat savaged to death by pit bulls in the front yard of the house in Kanchanaburi on Tuesday. (Photo: Nut Kmutnb Facebook page)