A woman accused of luring young girls, including her daughter, into providing sex for money, after her arrest on Thursday in Chiang Rai province. She was one of three women arrested in the operation on charges of colluding in human trafficking. The two others were arrested in Saraburi on Friday. (Photo supplied)

Three women have been arrested on charges of enticing young teenage girls into providing sex services for money, one of them the mother of one of the girls.

They were arrested when police from the Anti-Trafficking in Persons Division searched three premises, in Saraburi and Chiang Rai, targeting members of a network luring young girls into prostitution.

Pol Maj Gen Wiwat Khamchamnarn, commander of the division, said on Friday the operation was launched on Thursday when police arrested the mother of one of the girls, Naree, or Na, 49, in Chiang Rai at Lan Muang market in tambon Sansai of Muang district.

Her job was to take the girls to service customers.

On Friday morning, they searched a house in Sao Hai district of Saraburi and arrested Ms Narisa, 37, or Nong, Pol Maj Gen Wiwat said. She was a contact for customers and also took girls to them.

Police also apprehended Thittaphat, alias Ice, 27, at a dormitory in Ban Mo district. She was a contact for customers.

The three suspects allegedly deducted 300-500 baht each time from the money the customers paid for the girls.

Police withheld the full names of the three women.

The women were named in arrest warrants issued by the Criminal Court on April 4 for colluding in human trafficking and unlawfully profiting from girls aged less than 15 years and girls aged more than 15 but below 18.

Pol Maj Gen Wiwat said that police learned in February that girls younger than 18 were being provided to service customers in Saraburi and other provinces via Twitter and other social media platforms.

Police posing as customers were sent to buy sex and they managed to rescue three girls, who were now in protection. Further investigation led to the arrest of the three women, he said.

Investigators said the three girls had been lured into prostitution by the three suspects, who told them they would be working selling goods online. One of the girls was Ms Naree's daughter.

The girls had been taken to stay in a dormitory room in Saraburi province. They were forced to provide sex services for customers every day, according to police. If they resisted, they were intimidated or scolded or even assaulted into agreeing. 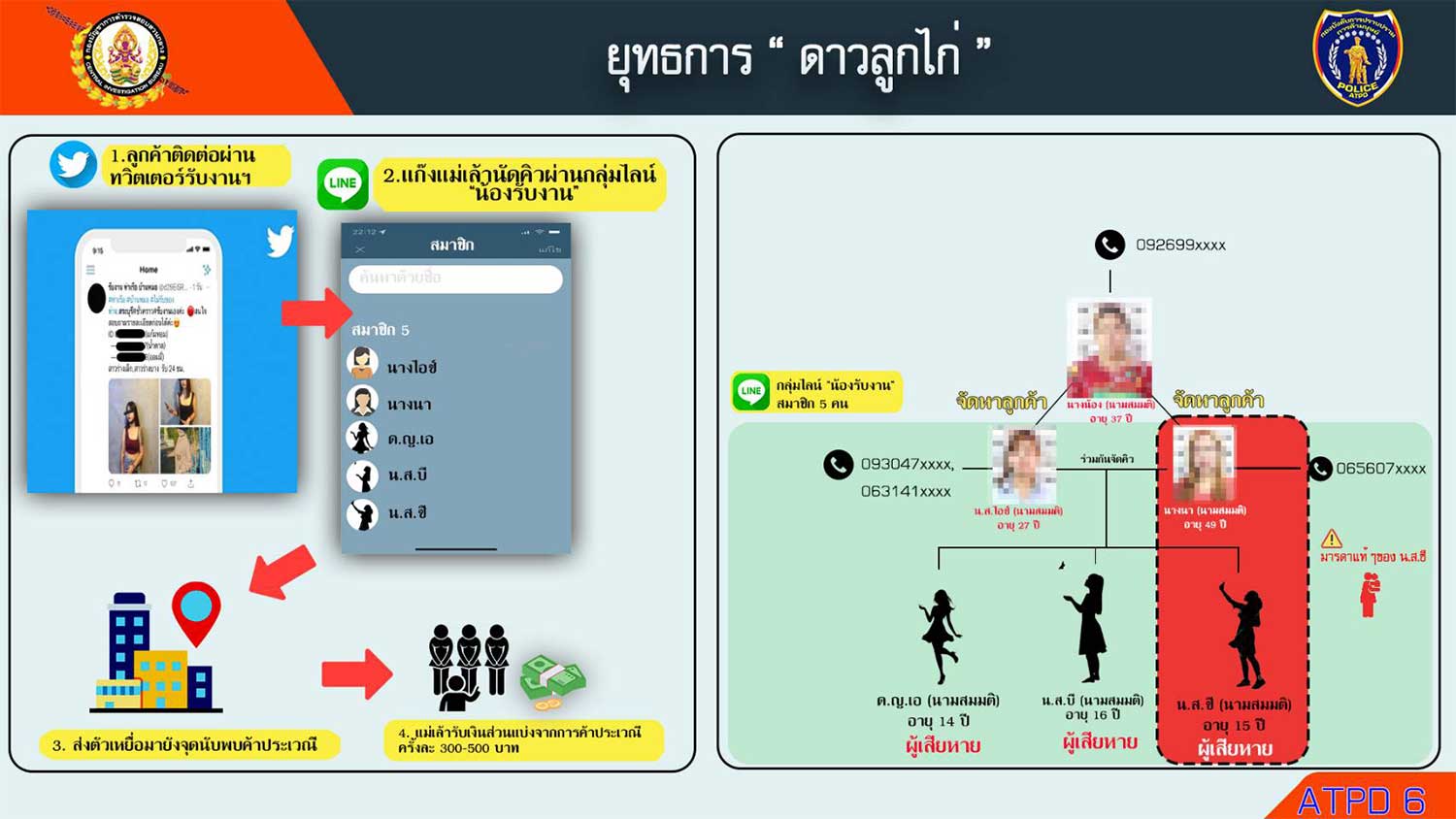 A police chart shows the arrest of the three women charged with luring young girls into the flesh trade. (Photo supplied)