Girl, 14, gets boyfriend to kill her mother
Thailand
General

Girl, 14, gets boyfriend to kill her mother

Rescue workers help police cordon off the corridor outside the flat at the Khajornwit Eua Artorn housing project in Bang Phli district, Samut Prakan, where a 53-year-old woman was stabbed to death on Thursday night. (Photo: Sutthiwit Chayutworakan)

SAMUT PRAKAN: A 14-year-old girl convinced her 16-year-old boyfriend to kill her mother because she was "obstructing their love".

The two teenagers were arrested by police and face charges of colluding in stabbing her mother to death in a room in Bang Phli district. The boy also allegedly stabbed the girl's older brother several times when he intervened.

Police sent to the scene first came upon an injured 23-year-old man, Mr Kitti, on the path to the flat. He had knife wounds to his body, neck, shoulder and face. He was given first aid and sent to a hospital.

On the first floor, they found a 16-year-old boy in blood-stained clothing sitting outside a flat.

Inside the flat, a 53-year-old woman, Ms Jeerapha, lay dead on the floor, face up in front of the bathroom. She had seven stab wounds - to her neck, face and back of the head, police said. A sharp 10-centimetre-long knife was on the floor of the room, which was stained with blood splatter.

A 14-year-old girl, the victim’s daughter, was also in the room.

During questioning, the 16-year-old boy told police his girlfriend came to see him outside the flats with a plan to kill her mother.

They entered the flat and his girlfriend told him to hide in the kitchen and gave him a knife.  She later signalled him to attack her mother. So he emerged from the kitchen and stabbed the woman several times.

He admitted they had killed the woman and said they did it because she "obstructed their love", police said.

The girl confessed to having plotted the murder, claiming she had a mental problem and sometimes lost control of herself.

The next door neighbour, Ms Phorn, 49, said she heard loud noises coming from the victim’s flat, but the door was closed. Then the victim’s injured son rushed, bleeding out of the door  and shouted for help.

A youth armed with a knife followed him out and tried to attack him. She immediately called police.

The two young teens were taken to Bang Phli police station on Thursday night. A team of psychologists were due to help with the police questioning.

Names were withheld because of the ages of the suspects.

Police took the two teen suspects to Samut Prakan Juvenile and Family court for approval to further detain them on Friday.

The two students spent a lot of time chatting on the phone. The girl failed in five subjects and her mother was angry over her poor performance. The girl may not have properly understood and felt pressured by her mother, the local police chief said. The two suspects, both teenagers, sit in front of the room. (Photo: Sutthiwit Chayutworakan) 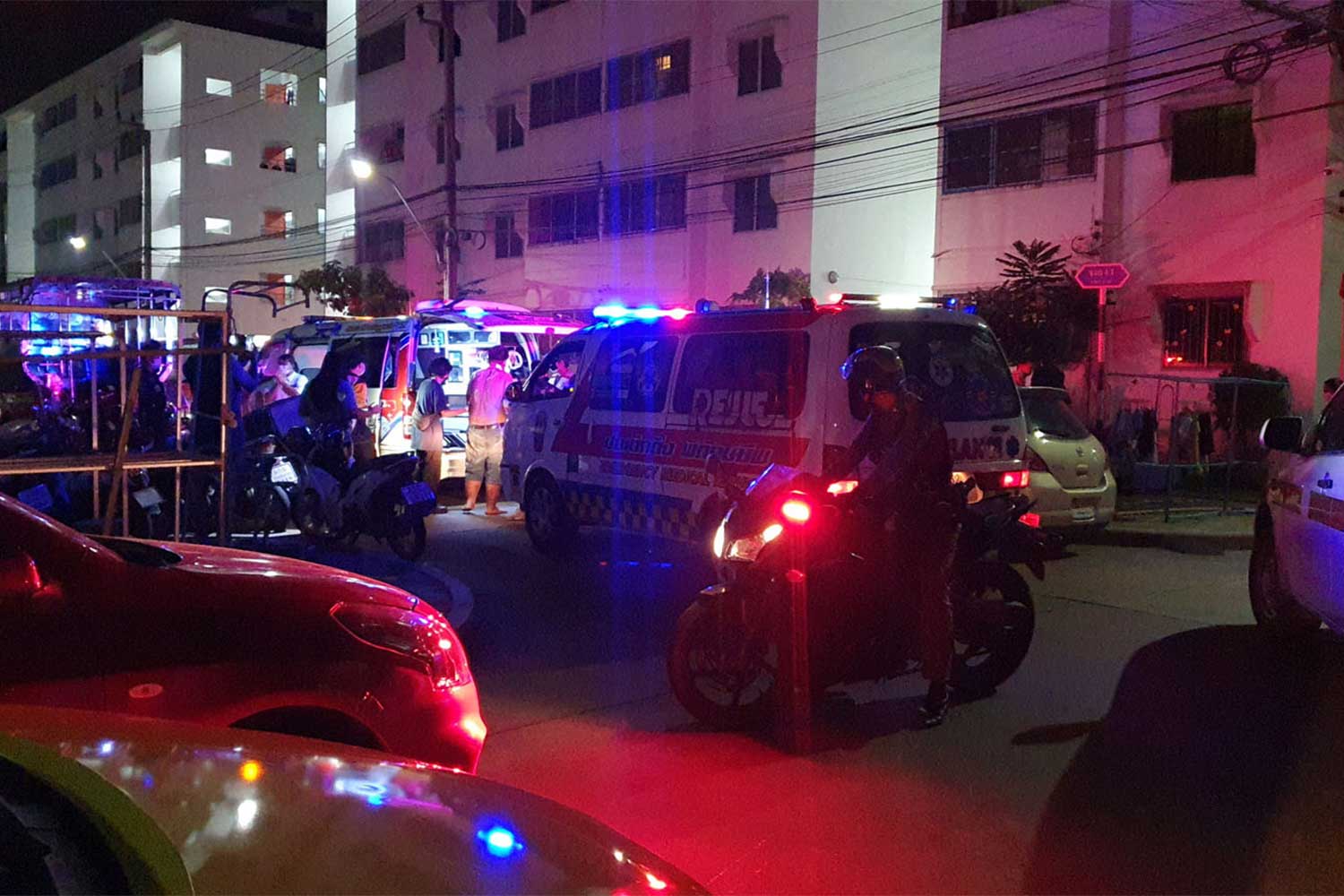 The flats at the Khajornwit Eua Artorn housing project in Samut Prakan, where the murder occurred on Thursday night. (Photo: Sutthiwit Chayutworakan) 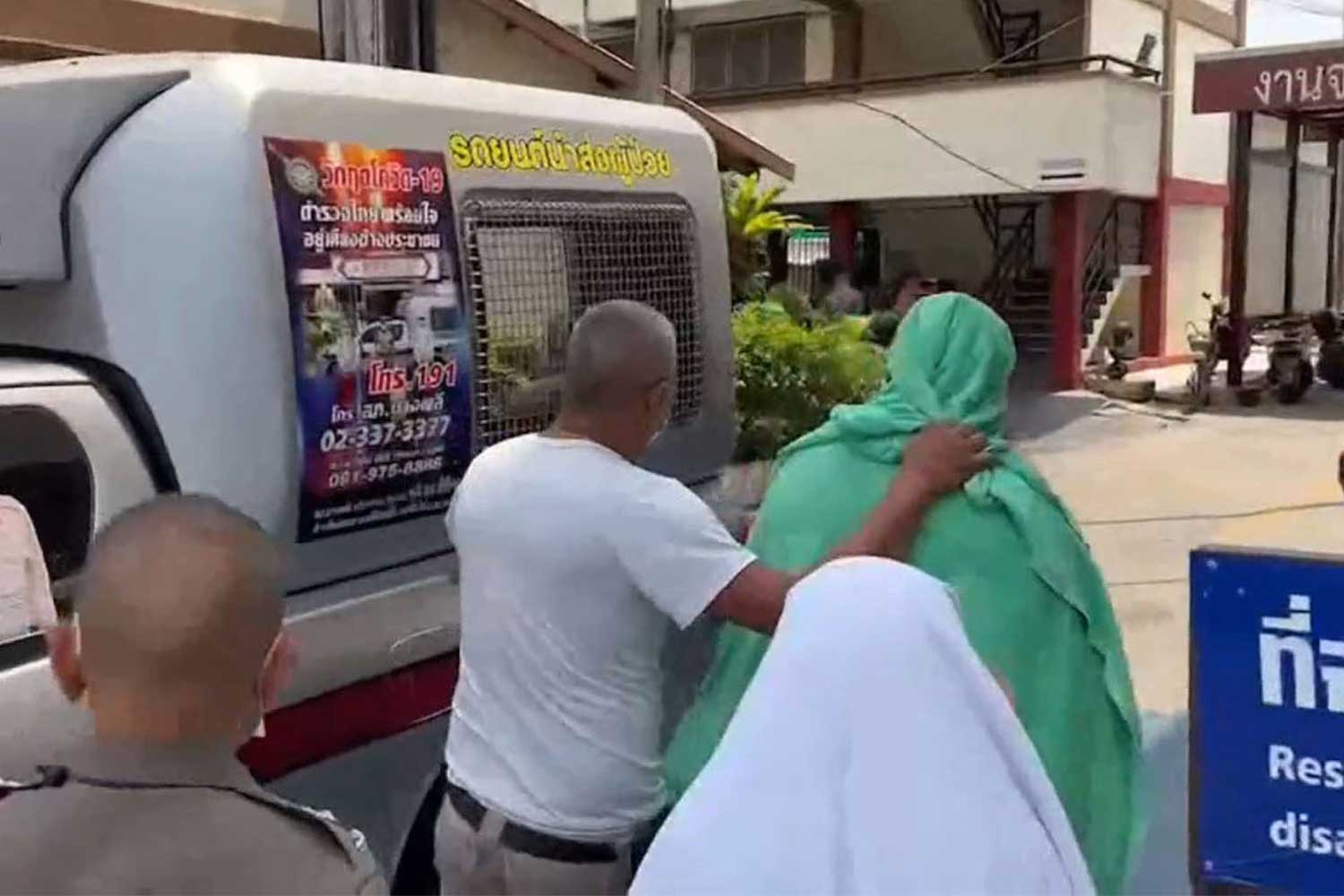 Police take the two teen suspects to the Samut Prakan Juvenile and Family Court for the first round of detention on Friday. (Photo: Sutthiwit Chayutworakan)