He also stresses the need for academic research that can be applied to benefit the police force and society as a whole.

"It is important for cadets to acquire practical knowledge and hands-on experience to help them deal with nefarious activities, particularly cybercrime, apart from theories learned in classrooms," he said.

Known as the RPCA "headmaster", Pol Lt Gen Thatchai is another example of what Thais call a luk mor -- a staff member who has worked at the same place for a very long time, and as such, is deeply familiar with the depth and breadth of his organisation and its work.

He is the son of Pol Lt Gen Thammanit Pitaneelaboot, a former commissioner of the Provincial Police Region 4. 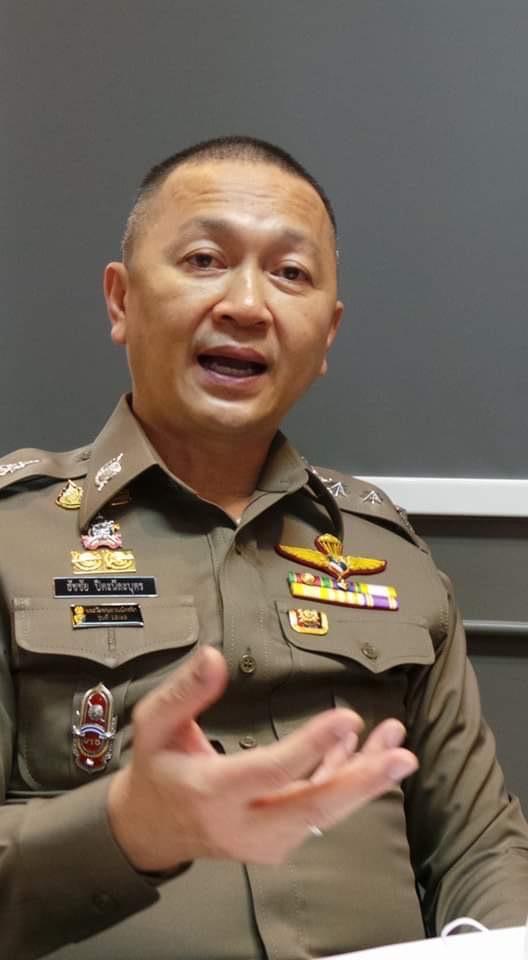 Pol Lt Gen Thatchai graduated from Suankularb Wittayalai School and furthered his studies at the Armed Forces Academies Preparatory School and the RPCA. After graduation, he started his career as an investigator at a station in his home province of Chanchoengsao, before pursuing his studies abroad.

He obtained a master's degree in public administration, specialising in the management of information systems, from Kentucky State University and a doctorate in criminal justice from Sam Houston State University in Texas.

After returning home from the US, he worked at the Royal Thai Police's budget planning unit and was a lecturer at the RPCA for more than 15 years.

He rose through the ranks before becoming a deputy commissioner of the Provincial Police Region 2.

He also took part in the International Senior Police Officers' Command Course organised by the Royal Malaysia Police College, in which police from all over the world take part, as well as other training programmes before returning to the RPCA where he has served as "headmaster for more than six months now.

He told the Bangkok Post that now is the time to revise the RPCA's learning and teaching approach to keep pace with technological and social changes, and said academic research will form an essential part of police cadet education.

"We are working on it this year," he said.

"We plan to create an environment to help transform the RPCA into an academy that will focus on applied research to find practical solutions to problems faced by the police force and come up with innovations to further develop the force. These will be part of curricular changes," he said.

Pol Lt Gen Thatchai added there is also a plan to set up an "innovator in cyber and digital security centre" at the RPCA at the behest of the national police chief so the police academy will be equipped with research facilities for experimentation to develop innovations.

"Technological matters related to smart contracts and cryptocurrency will become part of the learning process here," he said.

"Many people are interacting with each other and conducting business transactions on online platforms all over the world and people in Thailand are also joining this trend.

"Thailand ranked high globally for the number of internet users and time spent on social media.

"But there are also offences committed online -- defamatory remarks, fraudulent practices and scams. We need to improve our curriculum to prepare police cadets for crimes in the digital age," he said.

Cadets will not only obtain investigative skills, but also cyber security knowledge, he said, adding the revised curriculum is expected to be introduced to new cadets who will enrol next year.

Under the revised curriculum, specialists in various fields will be invited to teach cadets and broaden the range of their knowledge in various fields, such as cyber security, and collecting and processing digital evidence, Pol Lt Gen Thatchai said.

"We will put a great emphasis on practical work. If they are to keep up with changes, students must train in real work [situations].

"Teachers will be their coaches, providing them with advice. Students must learn more on their own," he said.

Cadets must also go out and learn to work in the field such as by helping police stations, Pol Lt Gen Thatchai said while stressing that having integrity is also an important part of being a police officer.

Cadets will also be sent as volunteers to help various organisations, he added.

"Learning will no longer be limited in classrooms. They must be out helping people. They must see for themselves how much victims of crimes suffer," he said.

Pol Lt Gen Thatchai said that before Covid-19 hit, the RPCA had arranged a programme to invite students from 10 Asean countries to study here.

Students from Myanmar, Cambodia and Vietnam took part in the programme, he said, but the programme has been suspended due to the pandemic.

However, the RPCA is seeking approval from the Royal Thai Police to resume the programme and will invite students from all 10 Asean countries, he said.

"We aim to upgrade the RPCA to be a leading institute for the police profession and education in Asean," Pol Lt Gen Thatchai said.

He said that cadets from the RPCA will also be sent to earn master's and doctorate degrees in Russia and South Korea, with memorandums of understanding being arranged with the two countries.

"Police cadets must have a good grasp of the digital world and cybercrime," he said.

"They must also deepen their understanding of social changes and learn to keep up with them," Pol Lt Gen Thatchai said.

"Research must be applied to support police work. Research will play a pivotal role in policy formulation and operations in the police force," Pol Lt Gen Thatchai said.