Ms Pratheep Larsen, wearing a blue cloth, and Ms Jaemchan Khamkaew are interrogated by police over a plot to have Ms Pratheep's husband killed in Nakhon Sawan. (Photo: Chalit Pumruang)

NAKHON SAWAN: A woman and her friend have been arrested for allegedly plotting to have her Danish husband killed in a staged road crash so that they can seize his 10-million-baht insurance pay-out. The husband survived but is critically injured.

Ekkasit Wichacharn, 24, was allegedly hired by the two to runover Mr Larsen with his car. He was also arrested.

Local police found a Toyota with a Lampang licence plate plunged into a roadside paddy field with its front damaged at the scene. A badly damaged bicycle was found 10 metres away from the vehicle.

While the crash initially appeared to be an accident, police investigators detected several suspicious elements to this case after examining evidence and carrying out a re-enactment with the driver. Further inspection led authorities to believe the crash was deliberate.

After intense questioning, Mr Ekkasit admitted to having been hired by Ms Jaemchan to carry out the attempt on Mr Larsen’s life. The Danish man was seriously injured but survived the incident. He is being treated at Sri Sawan Hospital. 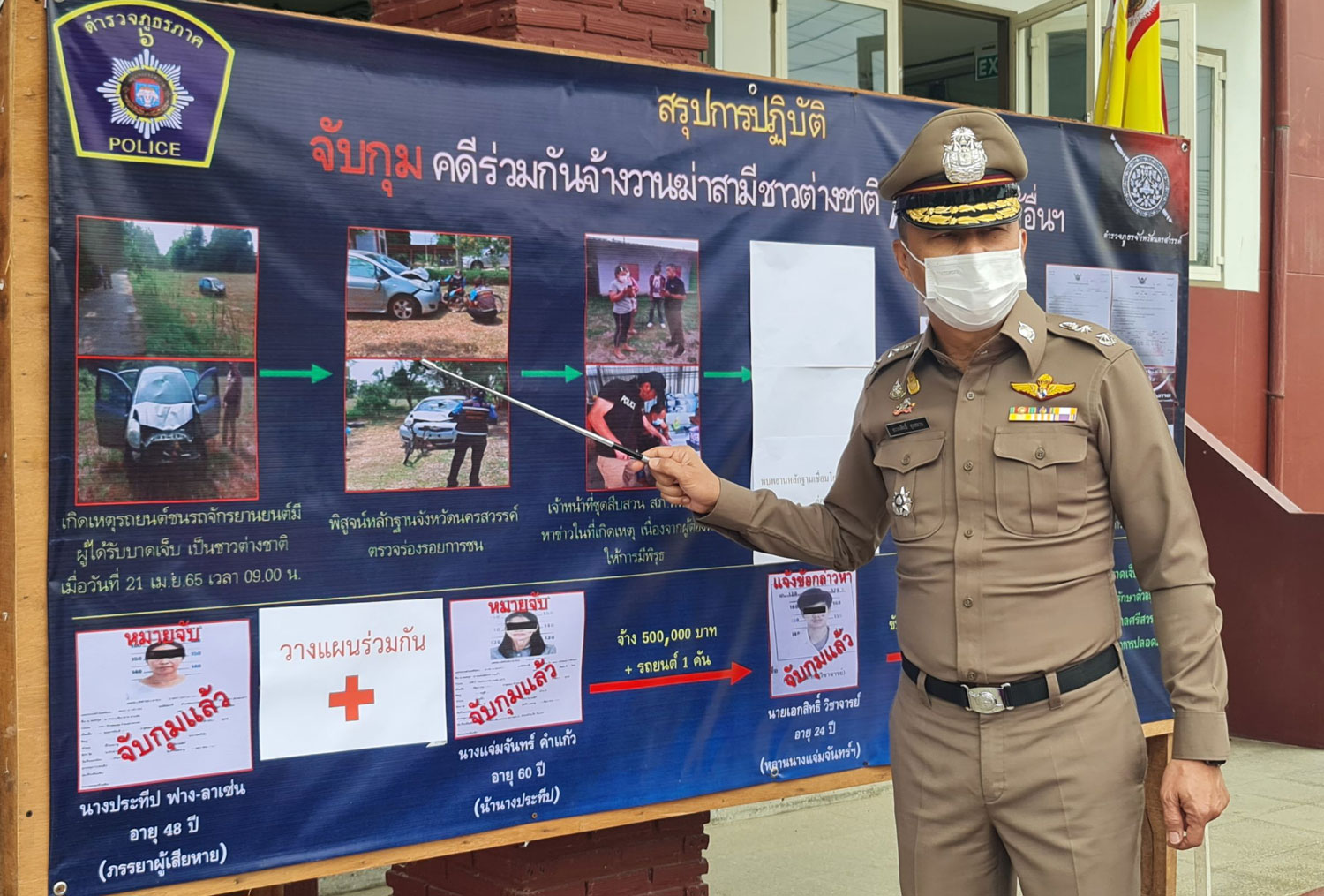 After the plot was exposed, investigators collected further evidence before questioning Ms Jaemchan.

Ms Pratheep was eventually implicated as the mastermind behind the scheme and was accused of hiring Ms Jaemchan, an older friend, for 500,000 baht to contract a killer for her husband so she could then claim his insurance pay-out.

The Danish man and Ms Pratheep previously resided in Denmark and have two children.  Returning to Ms Pratheep’s home province of Nakhon Sawan, the couple purchased several land plots worth a combined 20 million baht before settling down in the province.

It was reported that they had begun to quarrel recently, and Ms Pratheep had asked for a divorce and for their assets to be divided. After being refused, Ms Pratheep reached out to Ms Jaemchan, who had been accused of contract killing 10 years prior but had the charges dropped.

Ms Jaemchan promised her nephew, Mr Ekkasit, a new car if he successfully carried out the murder. Police said that Ms Jaemchan had since given her nephew 10,000 baht for car repairs.