A section of skin tissue, harvested from a lesion on the skin of a monkey infected with monkeypox virus, is seen at 50X magnification on day four of rash development in 1968. (File photo: Reuters)

Dr Opas Karnkawinpong, DDC director-general, said on Sunday that the centre was established in response to widespread interest in the spread of monkeypox, especially reports of cases in the United Kingdom.

The World Health Organization (WHO) has issued a statement confirming around 80 monkeypox infections worldwide with another 50 cases being investigated in at least 11 countries.

The WHO has conceded that more cases are expected in a number of countries after initial infections were recorded in the UK among travellers who had recently visited Nigeria.

Confirmed instances of monkeypox have so far been reported in the UK, Spain, Portugal, Italy, Belgium, France, Germany, Sweden, the United States of America, Canada, Australia, Israel, the Netherlands, Switzerland and Greece. 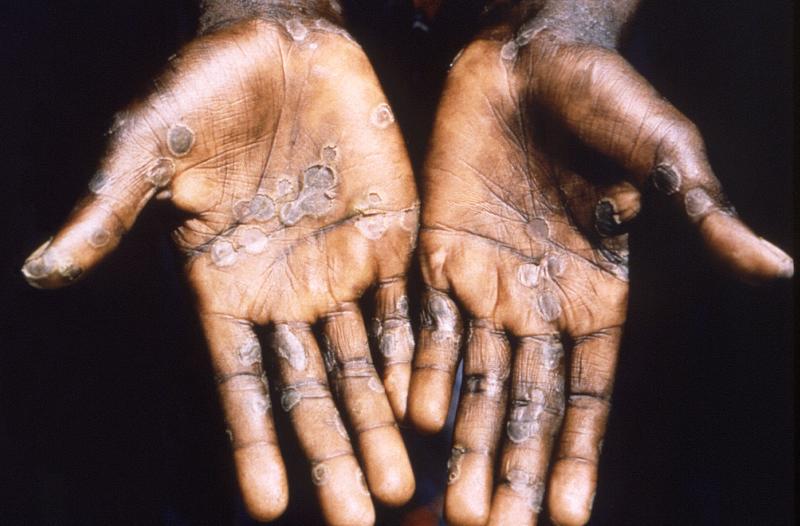 The palms of a monkeypox case patient from Lodja, a city located within the Katako-Kombe Health Zone, are seen during a health investigation in the Democratic Republic of Congo in 1997. (Photo: Reuters)

While affirming no such cases have yet been found in Thailand, Dr Opas acknowledged the risk posed by the country’s reopening to travellers.

The DDC’s international communicable disease unit reported that from May 1 to 22, a total 13,142 people from the UK entered Thailand, along with 1,351 from Spain and 268 from Portugal. Monitoring of such arrivals has been elevated in light of the disease's spread in other countries.

If contact occurs, they should quickly wash their hands with soap. Travellers should practice Universal Prevention and avoid coming into contact with the excretions of animals or undercooked animal products.

Gen Prayut wanted the ministry to provide information on the viral disease and ways to prevent transmission to the people so that they would stay informed and not panic, Mr Thanakorn said.

Myanmar will send a letter of apology to Thailand for an air intrusion by a MiG-29 fighter jet over the Thai soil in Tak's Phop Phra district on June 30, Foreign Minister Don Pramudwinai said in Tuesday.