The virus is reported to have already spread to many countries and can be transmitted by close human contact.

The focus will be on travellers from high-risk countries, such as Nigeria and Congo in Central Africa and some countries in Europe, where monkeypox infections have been reported.

Travellers may not have any symptoms of the disease before departure, but symptoms may show up by the time they arrive in Thailand. The symptoms include a temperature of 38 degrees Celcius or higher, sore throat, headache, muscle pain, backache, body rash, blisters and scabs.

Special attention will be given to passengers who live in or travel from countries where monkeypox has been reported in the past 21 days.

On arriving at Suvarnabhumi airport, travellers are required to scan a QR code to get a "health beware card" for them to fill in. Those who have symptoms of monkeypox are put into a monitoring system and then go to see a doctor at the nearest hospital.

Thai authorities have not yet declared monkeypox a dangerous communicable disease, and there have been no domestic cases.

Chakkarat Pittayawong-anont, DDC’s epidemiology division director, said on Wednesday that officials had been screening overseas arrivals since Tuesday. There were 10,000 arrivals on average at the moment, and no infections had been detected.

Dr Chakkarat said virus was not widespread overseas and there was a low fatality rate from the disease. Therefore, it was placed under surveillance and had not been declared a dangerous communicable disease.

The following are preventive measures against monkeypox suggested by the DDC: 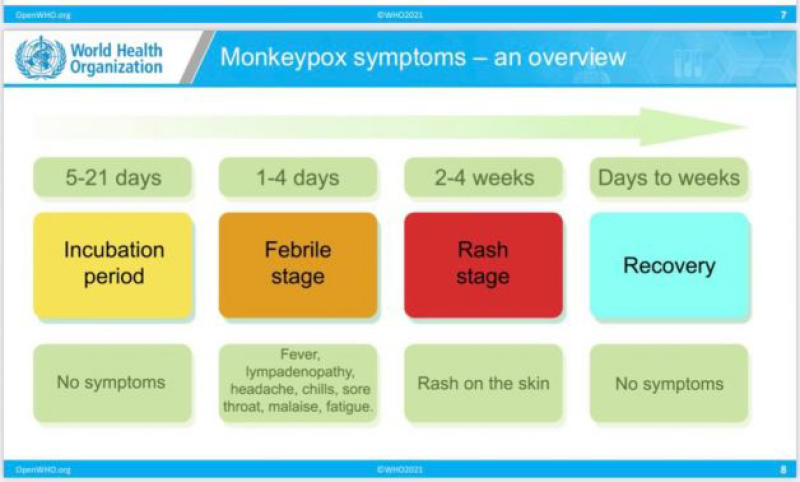