Consent required if used for profit

The Royal Thai Police (RTP) has issued a set of recommendations on the use of personal photos, videos and other files without violating the new Personal Data Protection Act (PDPA), which will come into effect on Wednesday.

Deputy police spokesman Pol Col Siriwat Deepor said on Tuesday that people can still take pictures and videos of others unintentionally and use them for personal purposes, but they must not cause damage to anyone. 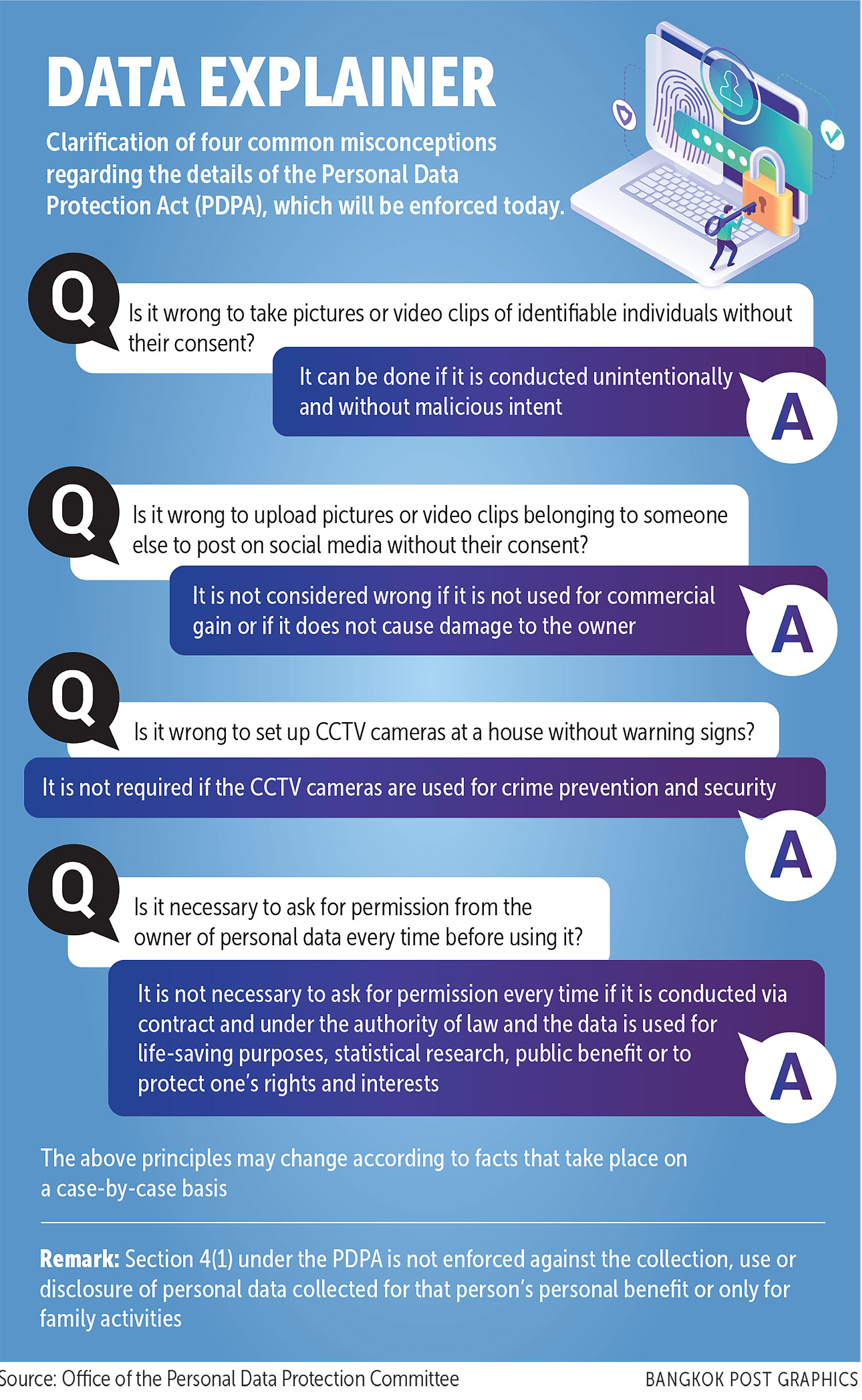 Under the new law, people can post pictures and video clips of themselves with others for personal purposes online, without the intention of commercial gain or causing damage, he said.

The deputy spokesman said the installation of CCTV will not require a warning sign if it is intended to prevent crime and boost security.

Personal data can be used without prior permission if it complies with legal requirements and is aimed at saving people's lives, protecting individuals' interests and rights and supporting statistical research and the public interest, Pol Col Siriwat said.

Pol Col Siriwat said the RTP had issued the clarification about the new law in a bid to help people understand the details.

The PDPA was published in the Royal Gazette in May 2019, with a one-year grace period for stakeholders to adjust. The full enforcement of the legislation was then pushed back twice due to the pandemic.

The government later pressed for the full enforcement from Wednesday, when law violators will be liable for a hefty fine of up to 5 million baht and maximum term of 1 year in jail for using personal data of others without consent.

Pol Col Siriwat stressed that consent from the owner of personal data is required, before it can be used to make a contract, undertake a legal process, be used to save a life, research or even the greater good of the public in the interest of protecting individuals' rights.

But some cases are not considered illegal if the uploaded pictures and video clips are unintentionally attached to someone else to post on social media without commercial gain and causing damage to that person.

In addition, the installation of interior CCTV cameras does not require a warning sign if they are for security purposes, Pol Col Siriwat said.

Deputy national police chief Pol Gen Damrongsak Kittiprapas said the legal team will later create mutual understanding among police about the new law again as it has so many details about it.

In principle, the PDPA law is meant to protect the personal data of organisations against being used for commercial gain or malicious intent, Pol Gen Damrongsak said.

Atip Asvanund, director of the Digital Council of Thailand, had earlier said the PDPA is not a problem for large organisations.

But it will affect SMEs, freelancers and online sellers, who still have many unanswered questions about PDPA compliance.

"If I were an online merchant with thousands of customers, I would still have no idea what to do [in response to PDPA compliance]," Mr Atip said.