Lithuanian detained in Pattaya over death of transgender lover

The Russian suspect in the death of his transgender girlfriend in Surin province is arrested in Pattaya, Chon Buri. (Photo supplied)

Police in Pattaya have detained a Lithuanian man whose transgender girlfriend was found slain in a locked room at her house in Prasat district of Surin on Wednesday.

The man was previously widely reported to be a Russian national.

The man was reportedly tracked down by the signal from the mobile phone he allegedly took from his dead lover. He was about 30 years old.

Deputy national police chief Pol Gen Damrongsak Kittiprapas said on Thursday that the suspect was spotted at Yinyom beach in tambon Nong Phue of Bang Lamung district around 12.30am on Thursday.  Police  arrested him.

During questioning, the man cried and admitted to have quarreled with the victim. The arresting team found bruising to his nose. The victim’s mobile phone was also found with him.

A police source identified the man as Marius Kunickas, a Lithuanian national.

Reports said he was being taken back to the lower northeastern province for DNA testing. If his sample matched evidence found at the scene, he would be formally arrested and charged with murder, reports said.

The body of Thiraphong Lamluea, 31, was found inside a closed room at her two-storey house in tambon Kang-an around 4.30pm on Wednesday.

Pol Capt Sanee Chimngam, a duty officer at Prasat, said the body was wrapped in a thick blanket that left her legs bare. There was a strong smell and it was believed she had been dead at least a week.

Thiraphong's mother, Wandee Lamluea, 47, said neighbours told her that there was a nasty odour, like a  dead animal, coming from her son’s house. She called a local rescue team to inspect the house.

They found drag marks on the floor and traces of hair and bloodstains outside the door to a spare room. She opened the door and found her son, a transgender woman, lying dead under a blanket.

She had three children and Thiraphong was the eldest and the main breadwinner of the family. He had been romantically involved with a man she said was a Russian for  6-7 months. They met in Phuket. 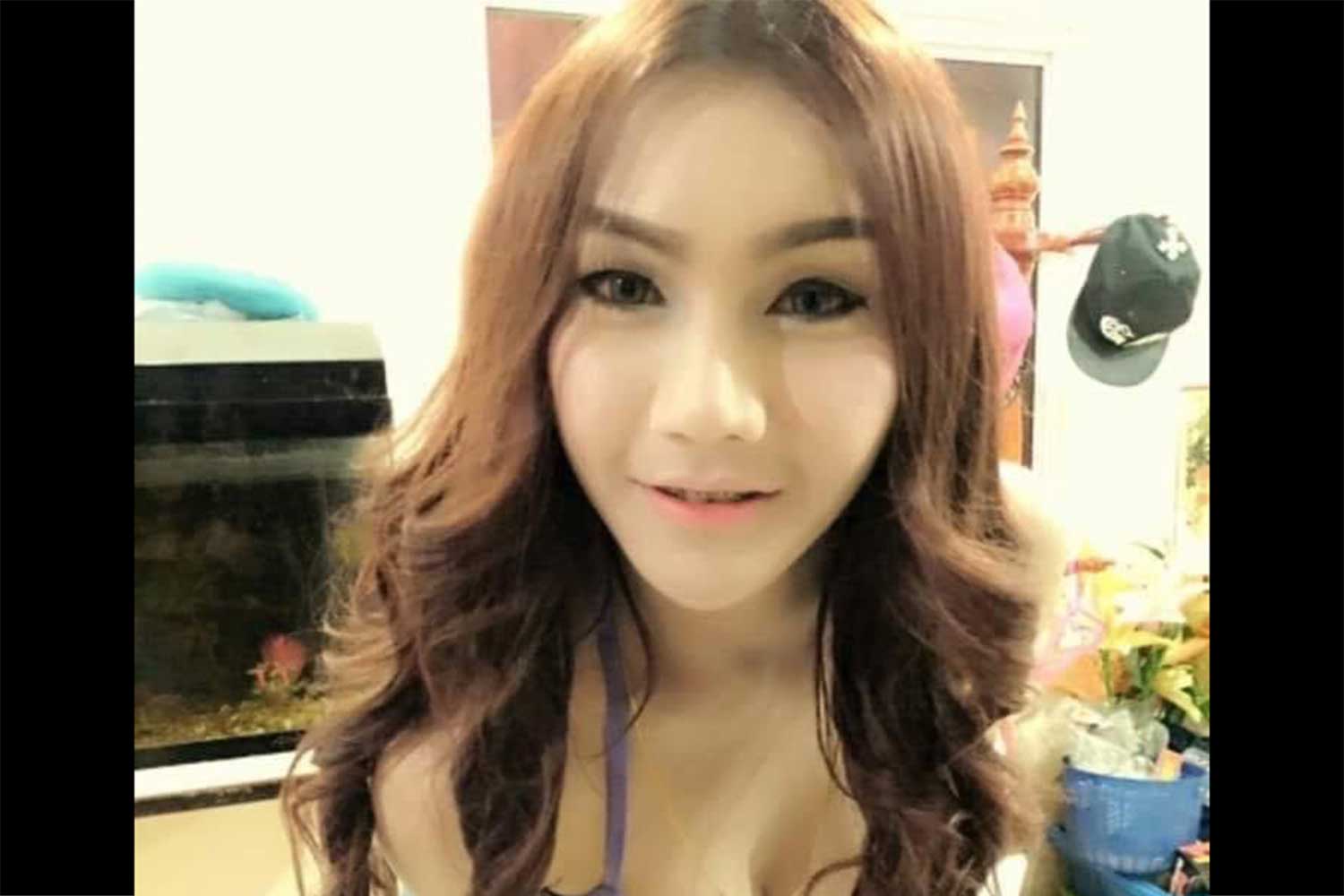 She said the man had stayed at Thiraphong’s house for one week. He drank a lot of beer. On May 26  the man had brought a box of beer to her house and he drank it with her. She noticed what looked like  bloodstains on his legs, and she also saw some bruises.

He had said a bottle had toppled and broken and pieces of it hit his legs, Ms Wandee said. She had no reason to doubt him and they drank together until about 9pm, when he left. Thiraphong had not joined them.

Around 2am the next day she got up to go to the market and passed Thiraphong’s house. She did not see the car her son had rented and driven from Ubon Ratchathani province. She assumed they had left together.

She was shocked to discover on Wednesday that Thiraphong had been killed. A Pitbull dog had also disappeared and she suspected it had been killed and buried somewhere.

According to Ms Wandee, police has surveillance camera footage showing the rented car left at the Prasat district bus terminal. Her son's friend was seen boarding a bus to Rayong.

She said Thiraphong also had a British boyfriend. They had known each other for seven years. He lived in the UK and had not returned to Thailand for a long time. She suspected the "Russian man" was jealous of him.

Ms Wandee said Thiraphong’s head had been beaten and she believed the killer had hit him with a bottle.

She said she learned from police that the suspect was spotted in Pattaya and they expected to locate him soon. Police were seeking a court arrant for the man's arrest, she said.

Neigbhours on Thursday helped set up tents in front of the house to prepare for funeral rites. 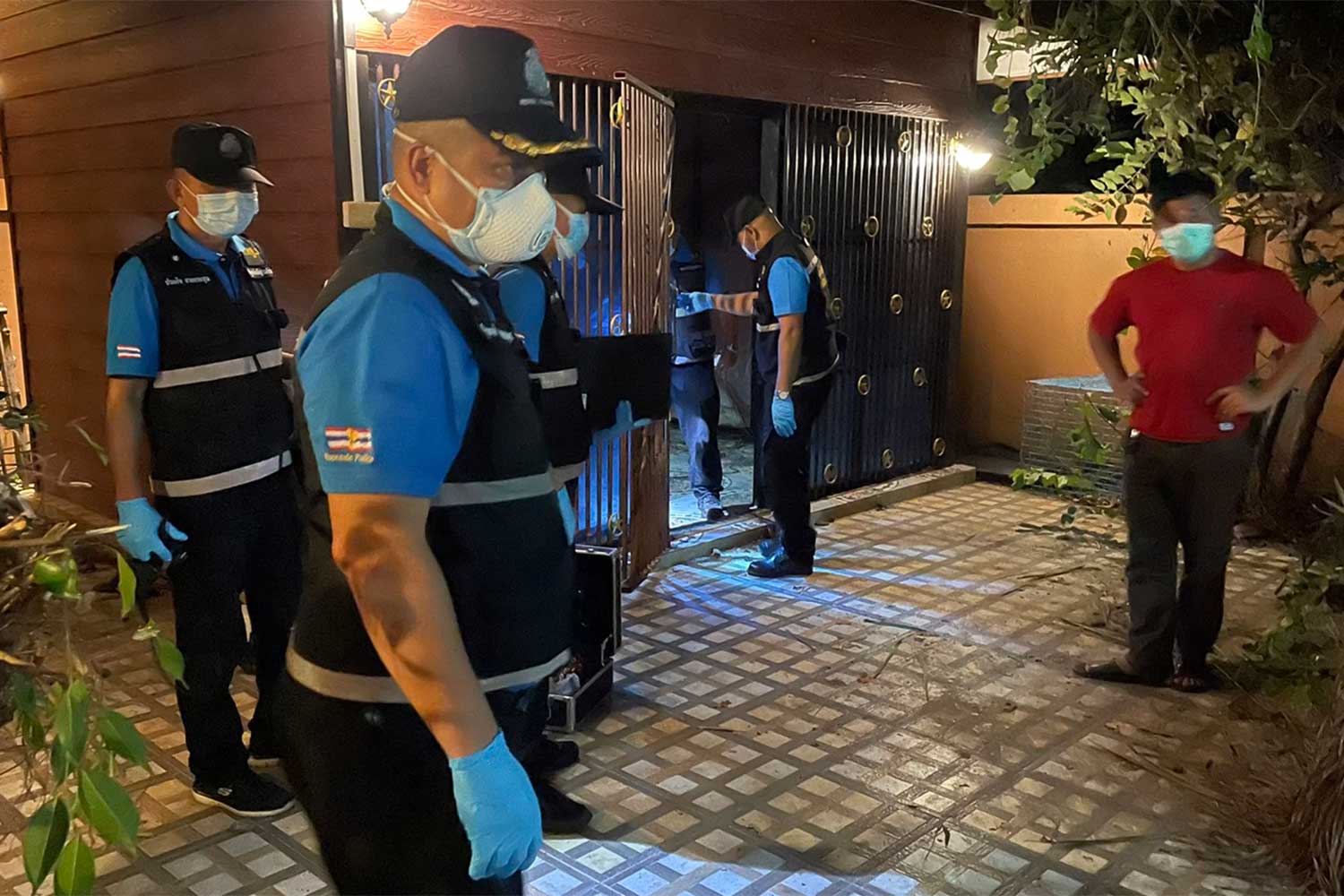 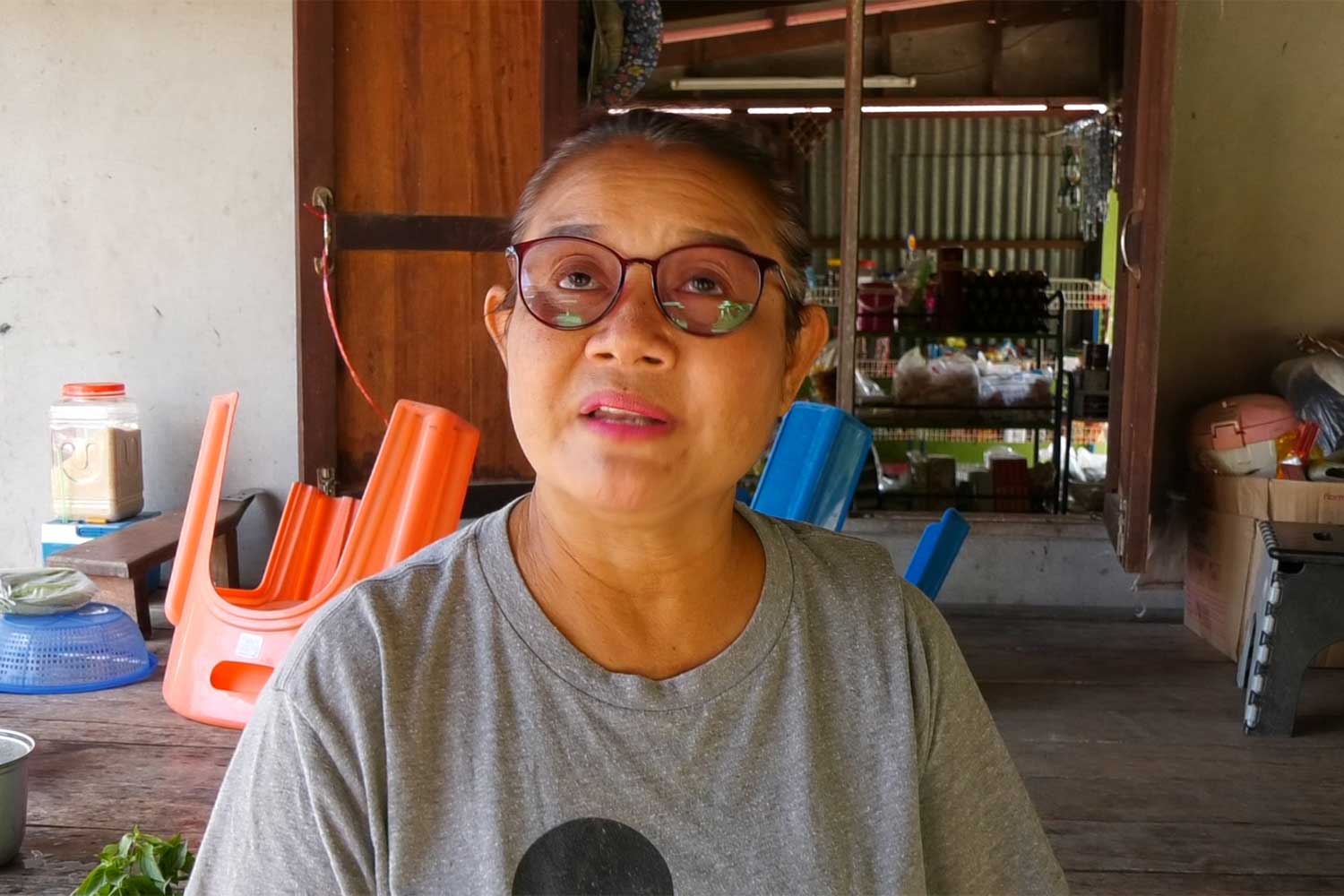 People gather to watch as rescue workers take the body of the murdered transgender woman from her house in Prasat district, Surin, on Wednesday. (Photo: Nopparat Kingkaew)