The Thailand Pass registration and Covid-19 insurance requirements will be lifted for all people arriving in Thailand from July 1.

The decisions were made at a meeting of the Centre for Covid-19 Situation Administration (CCSA) on Friday, spokesman Taweesilp Visanuyothin said.

Arrivals will need only show their vaccination certificates or Covid-19 test results.

Without such proof, arrivals will be given random, professional antigen tests upon arrival at airports.

Random testing will continue until the government lifts measures issued under the emergency decree imposed to deal with Covid-19, Dr Taweesilp said. 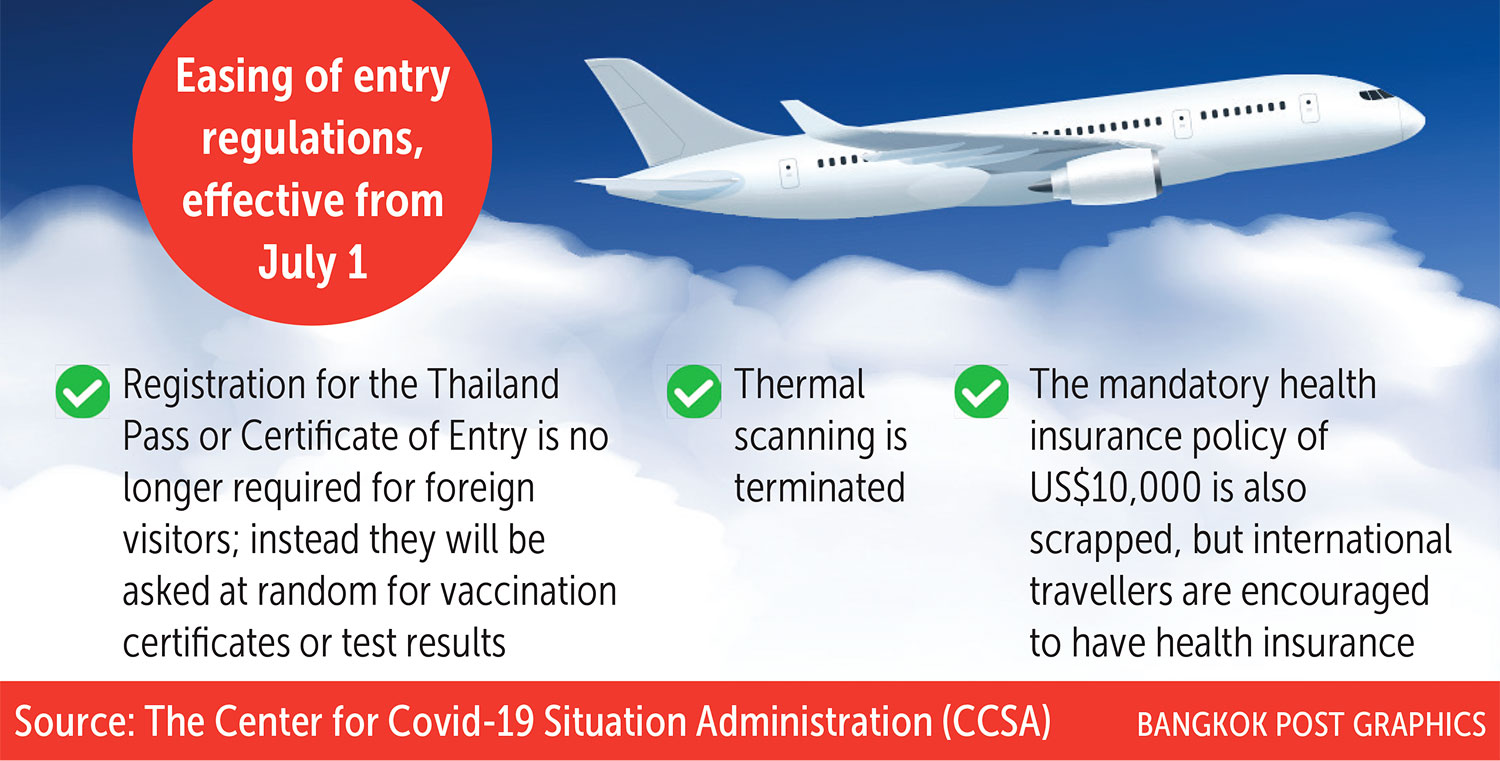 The Thailand Pass registration system will remain in place but be used only for travellers to report suspected symptoms of dangerous and other communicable diseases, as determined by the Public Health Ministry, Dr Taweesilp said.

Foreign nationals will not have to be insured for Covid-19, and thermal scanning will end at border checkpoints, he said.

A certification of fitness for entry, issued by a Thai consulate, will also no longer be required.

At present, visitors are required to have US$10,000 (352,640 baht) Covid-19 insurance coverage. From July 1, the government will still encourage visitors to have such insurance, the spokesman said.

The CCSA also agreed that all 77 provinces will be declared green (surveillance) zones where full business and other activities can resume, Dr Taweesilp said.

It is not clear if that change will also take effect from July 1. Dr Taweesilp only said it will become effective after it is published in the Royal Gazette.

Regarding a proposal to extend the opening hours of nightlife entertainment places until 2am, Dr Taweesilp said they are still required to close at midnight.

He said there are at least three laws stipulating different closing hours, so the CCSA instructed the National Security Council secretary-general Supoj Malaniyom, who serves as chief of the CCSA's operations, to study legal details before submitting the proposal to the cabinet.

"The prime minister wants the matter to proceed quickly. If possible, the government also wants it to take effect from July 1," Dr Ta­weesilp said.

From June 1, pubs, bars, karaoke bars, massage parlours and other nightspots in 14 reclassified green zones and 17 blue zones were allowed to resume business, but they are still required to close at midnight.

The CCSA also agreed to ease the requirement for wearing a face mask, making it purely voluntary outdoors or in uncrowded places.

Dr Taweesilp further said that people would be able to take off their face masks when they were in open-air places and during activities or at work where masks were not normally required.

Face mask wearing will still be required in crowded and poorly ventilated areas such as on public transport, markets and at concert venues.

He said the Covid-19 situation was improving and the country is on the way to entering a post-pandemic era on July 1.

Tourism and Sports Minister Phiphat Ratchakitprakarn said the number of foreign visitors is expected to rise from 20,000-25,000 per day to 25,000-30,000 when the Thailand Pass registration requirement ends and hit 50,000 in October.

It has been over two months since Thailand legalised the cultivation and sale of cannabis for medical purposes.

Gen Wit Devahastin na Ayudhya, the new leader of the Ruam Phaen Din Party, insists the party is not an offshoot of the ruling Palang Pracharath Party (PPRP).