Myanmar has apologised to Thailand after one of its fighter jets crossed into Thai airspace over Phop Phra district of Tak on Thursday, Prime Minister Prayut Chan-o-cha said.

However, the prime minister said that this was not a serious issue and relations between the two countries remain healthy. "This is no big deal," Gen Prayut said on Friday.

Myanmar authorities were informed about the incursion and they admitted they had violated Thai airspace and offered an apology, said Gen Prayut who also serves as defence minister.

"The military attaches spoke to each other, and theirs apologised. I already talked with them. This may seem like a serious incident, but it depends on whether we want to escalate this.

"The most important thing is that we have adequate capabilities to defend our sovereignty. We also need to be sure that our defences will be strong and modern enough in the future," he said. 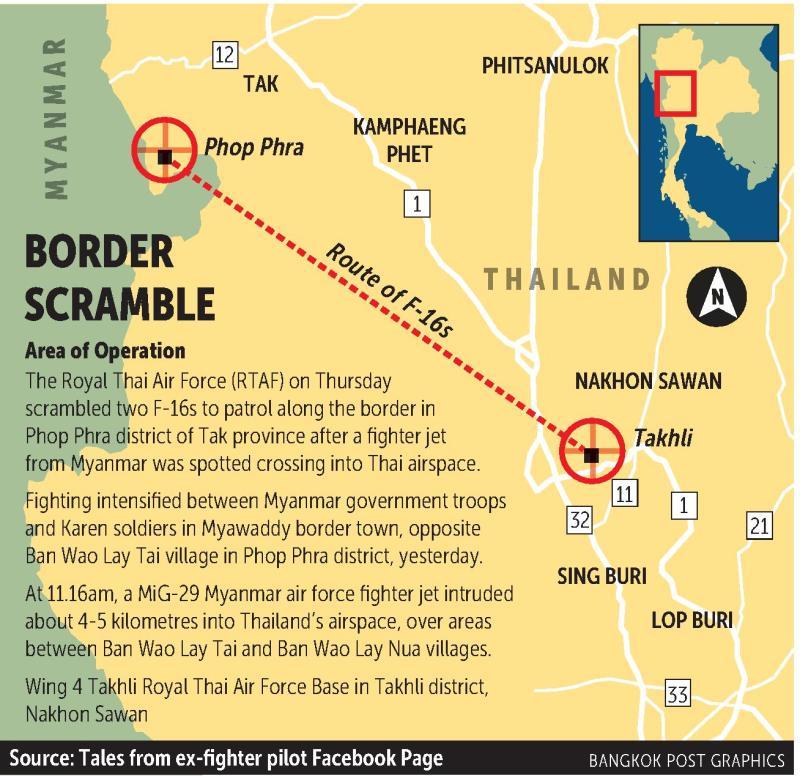 "Sometimes, we cannot judge by speed. Being calm and composed must also be factored in. We have to take into account whether it's a small or big situation. The right decision needs to be made in relation to a particular situation," ACM Napadej said.

ACM Napadej added that the RTAF has a radar system in place to detect any air violations by any foreign aircraft and has its jets ready for patrol and interception operations.

On Thursday, the RTAF scrambled two F-16 fighter jets to patrol along the border in Phop Phra district of Tak province after the Myanmar Mig-29 was detected intruding into Thai airspace.

AVM Prapas Sonjaidee, spokesman for the RTAF, said a military unit reported that the Myanmar aircraft crossed into Thai airspace over Phop Phra district at 11.16am.

The Mig-29 had launched airstrikes on ethnic rebels along the border and intruded into Thai airspace before it disappeared from the RTAF's radar screens, he said.

A source said later that Gen Prayut had spoken with ACM Napadej about the intrusion and asked the air force to lodge a protest via the Foreign Ministry and with Myanmar's air attache.

ACM Napadej later phoned his Myanmar counterpart about the incident. The Myanmar air force chief apologised and said such an incident would not happen again, said the source.

The intrusion of the jet and loud explosions in Myanmar caused some panic among villagers in two Thai border villages, prompting them to take shelter in bunkers. Some schools immediately suspended classes as the jet flew low over its buildings.

In parliament, Niyom Vejkama, a Pheu Thai Party MP for Sakon Nakhon, insisted that the airspace violation was not a minor issue.

"The Defence Ministry which oversees [the armed forces] must not let the RTAF make any excuses. The ministry must provide an explanation to the public for the sake of national security," he said.

Manop Kiriphuwadol, a Move Forward Party MP, said the airspace violation was a threat to national security, and that the RTAF was too slow to respond when the Myanmar aircraft crossed into Thai airspace.

He also criticised the government for failing to contribute to efforts to restore peace in the neighbouring country which is plagued by fighting between junta troops and Karen resistance groups.