People gather on the bridge across Bang Phra canal to see rescue workers searching for two female teachers after they jumped from the bridge late Tuesday morning. (Photo: Jakkrit Waewkraihong)

A rescue team launched a search for the two women after being alerted. The team had not found them, as of Tuesday evening.

Anon Boonsert, 32, told reporters that he saw two women inside a Honda car with Trat licence plates parked on the bridge around 11.45am on Tuesday. He was riding a motorcycle across the bridge but did not pay much attention to them. Moments later, he heard a sound of objects falling into the canal.

Mr Anon said he immediately rode back and found two pairs of sandals on the bridge. He believed that the two women had jumped from the bridge in an apparent suicide.

Police arrived at the scene after receiving a report from Mr Anon's family. They searched the parked car and found two teacher cards inside.

The cards bear the names of Paweena Patnuson, 45, and Lakkhana Phanarot, 61. They were teachers of Nong Khansong School in Muang district, and they were relatives, according to a police source.

The officers also found two handwritten letters with messages of what drove them to commit suicide. 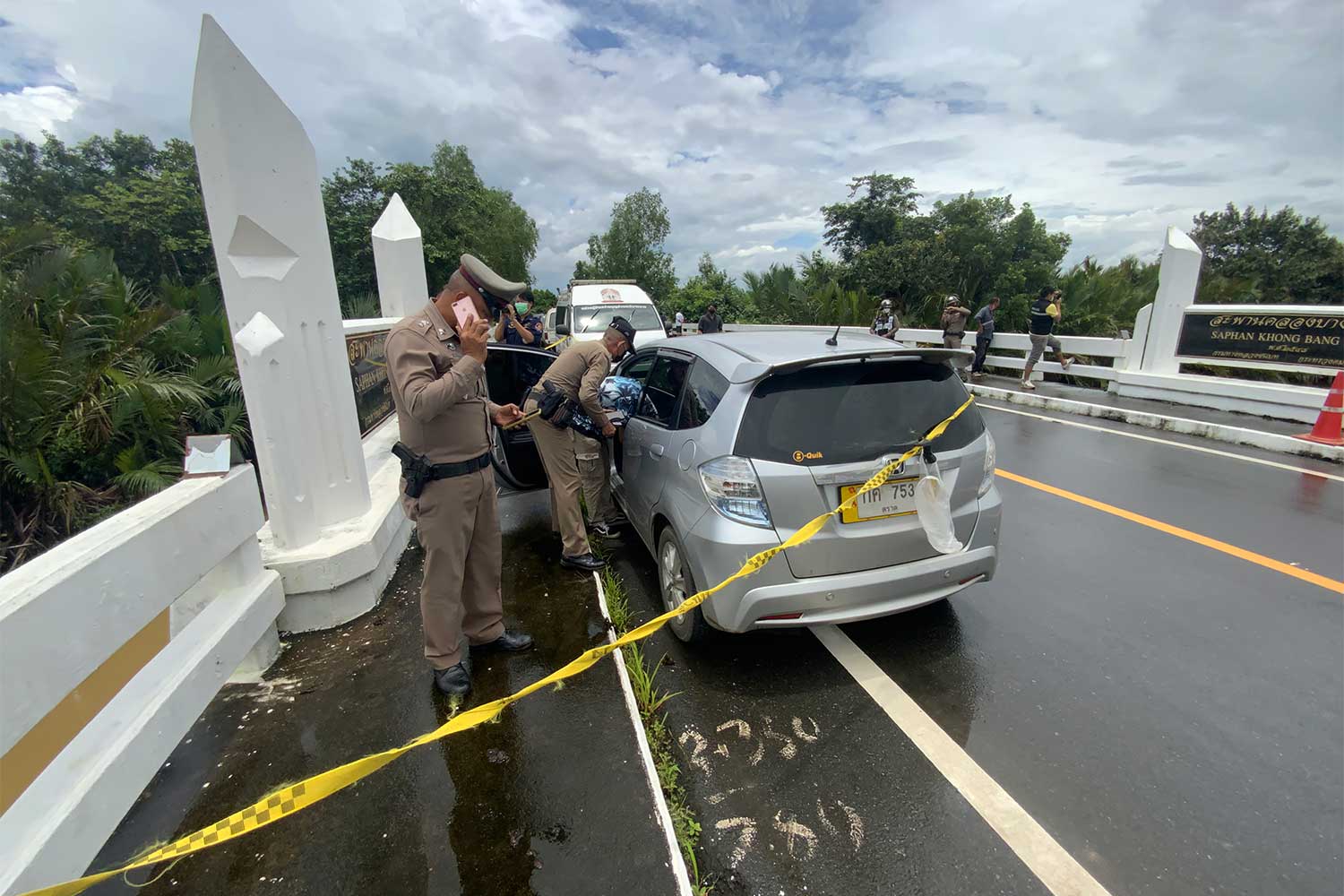 Police inspect a car parked on the bridge with two teachers cards and their farewell letters inside. (Photo: Jakkrit Waewkraihong)

In Ms Paweena’s letter, she apologised to her two children for her action and those whom she borrowed money from. The teacher said she was bankrupt because she was cheated.

She appealed to a person whom she mortgaged her land for mercy by allowing her children to pay back in instalments.

As for the house where her family lived, she asked her children to pay 7,000 baht a month to the lender. She only left the lender’s phone number in the letter.

In Ms Lakkhana’s letter, she apologised to her two children as she could no longer live with them. She told them that she and their young aunt had done their best, but they could not wait until the next day.

She told them to be strong. She had money deposited in the Bank for Agriculture and Agricultural Cooperatives’ Trat branch and asked their children to contact a staff of the bank’s credit section for help.

Jeerawat Ratchawong, 23, son of Ms Paweena, rushed to the bridge around 12.30pm after learning about his mother’s situation.

Mr Jeerawat said he and his mother had a normal conversation on Tuesday morning before she left the house.  She phoned him around 9am to tell him not to forget to see a doctor as he was sick.

He learned about his mother’s news after checking the province’s news Facebook page and saw his mother’s car on the bridge. He immediately rode his motorcycle to the scene.

Mr Jeerawat said there were no signs that his mother would take her own life, but he was aware that his mother had been cheated. He had two younger brothers, who were now studying at a primary school in Trat.

Rescuers began the search around 12.45pm. Three boats were used to search for the two missing teachers but there were no traces of them, as of Tuesday evening.