Groups rally against PM over his eight-year tenure
Thailand
General

Groups rally against PM over his eight-year tenure

Protesters held a ritual to put a curse on dictators

Demonstrators hold an activity against Prime Minister Prayut Chan-o-cha over his eight-year tenure at the rally site at the Democracy Monument on Tuesday evening as groups of protesters rallied to oust him. (Photo: Wichan Charoenkiatpakul)

Groups of demonstrators staged rallies against Prime Minister Prayut Chan-o-cha over his eight-year tenure on Tuesday.

At Lan Khon Muang in front of City Hall, many demonstrators rallied to put pressure on Gen Prayut over his term limit.

Political activist Jatuporn Prompan said his group would stay at the site until midnight to start the countdown for Gen Prayut. The rally will be peaceful, he insisted.

Some 120 red-shirt protesters gathered at the Democracy Monument on Ratchadamnoen Avenue and started a ritual to put a curse on military dictators at 5.05pm. The protesters used one of the lanes to hold the ritual.

Ngernta Khamsaen, a leading member of the "Talu Khook 100%" group, delivered a speech on the stage, saying her group would also stay until midnight.

At around 5.25pm, Kanlamon Sunantharat, another leading demonstrator, began the curse ritual with about 50 demonstrators taking part in it. Other demonstrators observed the activity on pavements.

The Daeng Kao Na group also gathered at the monument and leading protesters said they would march to Lan Khon Muang on Tuesday night.

Police had blocked off routes to Government House with shipping containers and rolls of razor wire on Tuesday morning ahead of rallies by many groups of protesters against Gen Prayut. Containers were also placed on Chamai Maruchet Bridge on Phitsanulok Road, opposite Government House. Demonstrators, numbering about 500, gather at Lan Khon Muang in front of City Hall to start the countdown to the eight-year limit on Gen Prayut Chan-o-cha's premiership. (Photo : Wichan Charoenkiatpakul) 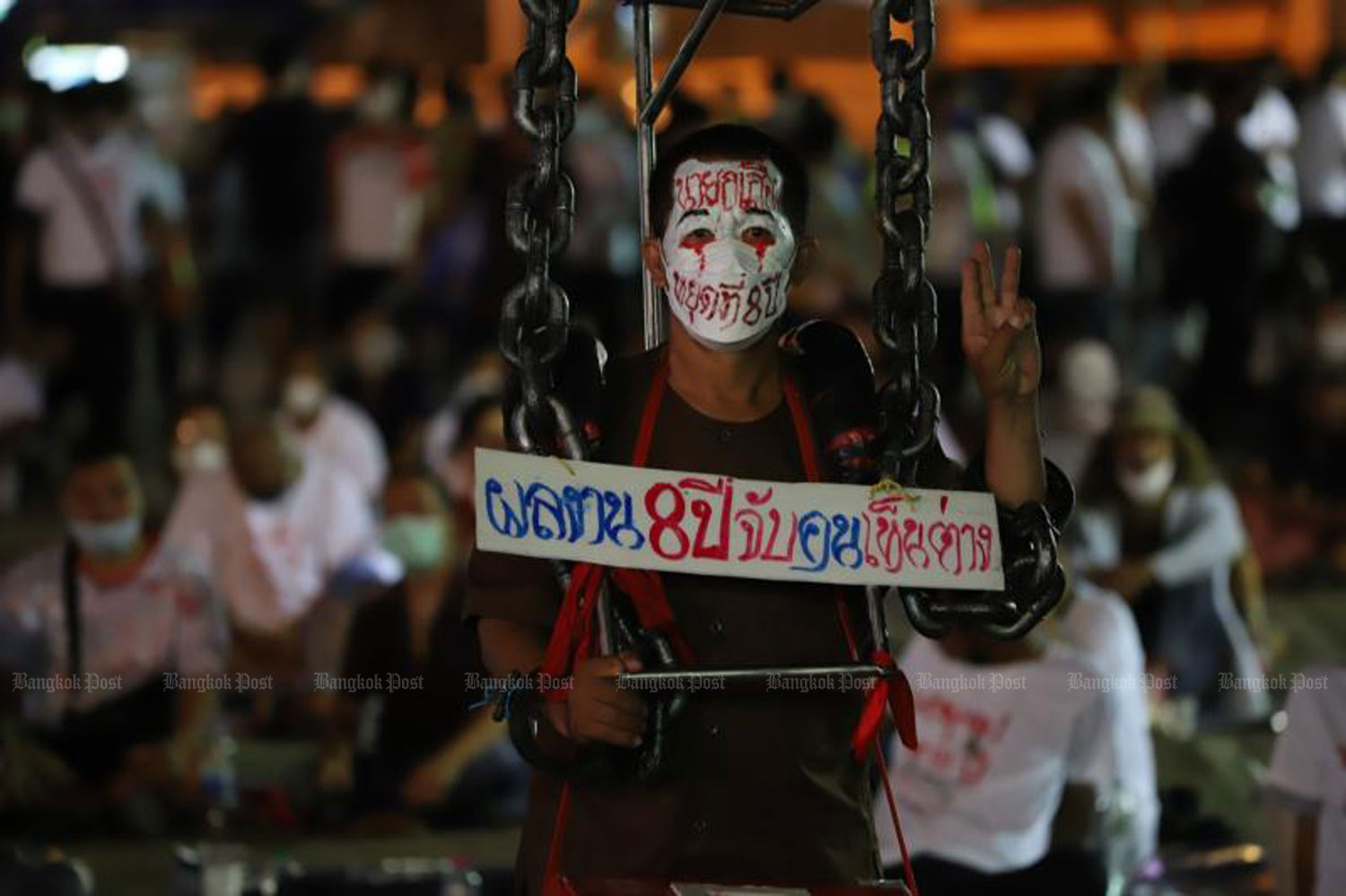 A demonstrator flashes a three-finger salute with chains wrapped around his hands and a neck placard "Eight-year achievment is arresting people with different views" during the rally against Prime Minister Prayut Chan-o-cha over his eight-year tenure at Lan Khon Muang in front of City Hall on Tuesday night. (Photo: Wichan Charoenkiatpakul)