Police arrest alleged shooter Rungroj Thianyoi in Lampang on Thursday for the murder of his estranged wife's 27-year-old lover at a resort in Khon Kaen province on Wednesday night. (Photo supplied: Wassayos Ngamkham)

A businessman wanted by police after his estranged wife's lover was shot dead in a spa tub at a resort in Khon Kaen on Wednesday night has been arrested in Lampang province.

The slain man and the suspect's former wife had checked-in to a room together at the resort.

He was wanted on a court arrest warrant for the murder of Yutthaphan Phuang-ngam, 27, at a resort  in Phu Pha Man district of the northeastern province of Khon Kaen on the night of Sept 7.

A housekeeper found the man dead with gunshot wounds, lying in the blood-stained water of a large curtained-off spa tub outside a bungalow room on Thursday morning. He and a 39-year-old woman, Benjamat Phukham, had checked-in together. She was missing.

According to police, the killer took Ms Benjamat with him at gunpoint as he fled in her car. Police learned that he was heading to the North and they set up checkpoints along the route. The car was stopped in Lampang and he was arrested.

Ms Benjamat was sitting in the car's front passenger seat. She was unhurt. A 9mm pistol with 47 rounds of ammunition was also found in the car. Mr Rungroj was charged with murder and illegal possession of a firearm and using it in public.

Mr Rungroj was heading for Chiang Mai when he was caught and had planned to flee across the border, Pol Col Wiwat Jitsophakul, superintendent of CSD sub-division 3, told reporters.

The suspect allegedly admitted to having shot the victim three times. He and Ms Benjamat gave conflicting statements over the motive for the shooting, police said.

Mr Rungroj claimed Ms Benjamat had asked him to shoot the man over a financial problem. She told police Mr Rungroj was jealous and followed her to the resort.

She told police that she and Mr Rungroj had quarrelled frequently. She left him and returned to her home in Khon Kaen about a month ago. She had a new boyfriend, Yutthaphan, and they had gone together to the resort in Phu Pha Man district, where he was murdered. (continues below) 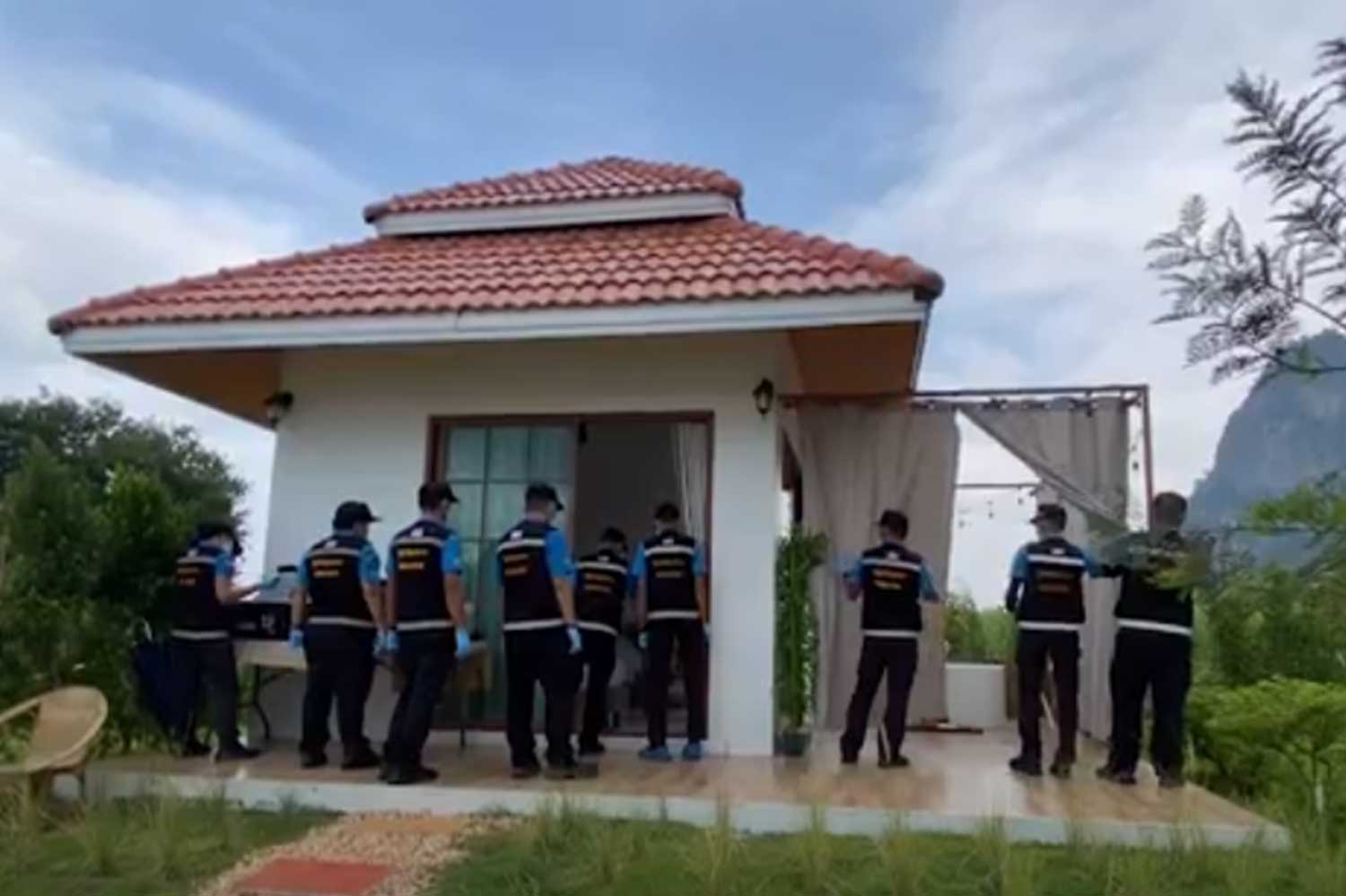 Forensic police inspect the bungalow room and spa tub area at the resort in Phu Pha Man district of Khon Kaen where the 27-year-old man was shot dead. (Capture from video: Chakrapan Natanri)

Pol Maj Gen Montri Thetkhan, CSD commander, said Mr Rungroj was a wealthy man with a business in Samut Sakhon's Mahachai market. He and Benjamat had been couple before she ended their relationship.

Pol Capt Uthai Tophukhiew, deputy investigation chief at Phu Pha Man police, said there were eight rooms at the resort. The victim and Ms Benjamat had stayed in room No 3. The suspect had booked into room  No 4.

The resort owner, who declined to be named, told police Ms Benjamat had booked the room on Sept 1 and checked in on Wednesday. She arrived with the victim in a Honda Civic car.

The suspect had tried unsuccessfully to book a room several times, but none were vacant. Room 4 finally became available on Wednesday morning, and he took it. Mr Rungroj had arrived on a motorcycle and checked in to room 4 on Wednesday, according to the resort owner.

Around 8pm on Wednesday, other guests informed resort staff that they had heard three shots fired inside the resort. The resort owner's daughter-in-law went to check and found the male guest who was staying in room 4 holding the hand of the woman from room 3, and they were leaving the resort.

The man said he and the woman were going out and come back later. He then drove off in the woman’s car, taking her with him.

The dead man was discovered by a housekeeper the next morning. He had been shot three times, in the neck and chest.

Pol Maj Gen Noppakao Sommanas, chief of Khon Kaen police, said the suspect had been driving a Mercedes Benz with Bangkok licence plates when he earlier checked into another resort about one kilometre from the crime scene. He later borrowed a motorcycle from a resort employee.

He told the employee he was looking for his wife. She was staying at another resort but he did not know which one. She had sent a photo to his phone and told him to meet her there. The suspect tracked her down to the resort where the murder occurred, Pol Maj Gen Noppakao said. 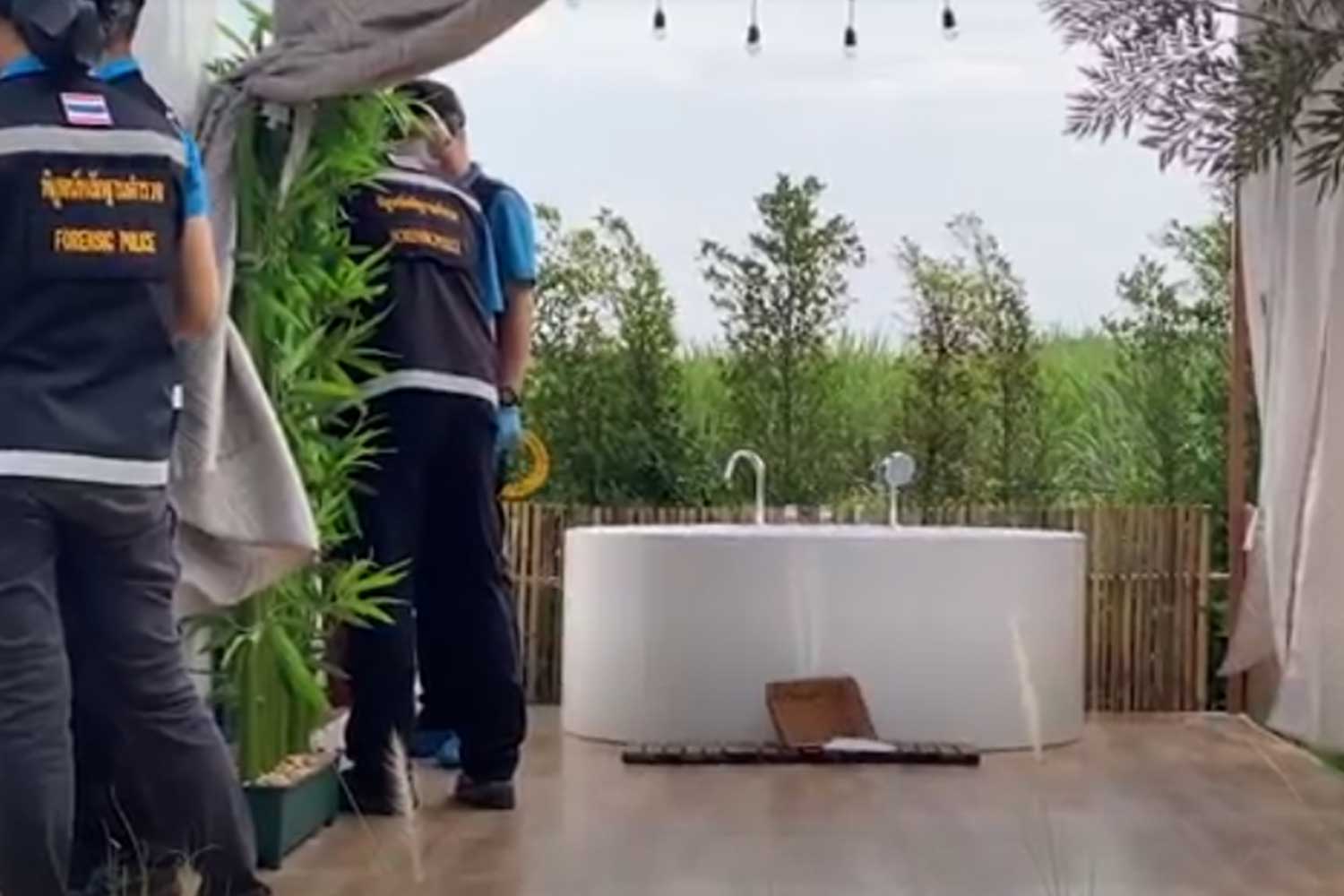 Police near the outside spa tub where the dead man was found, at a resort in Khon Kaen. (Capture from video: Chakrapan Natanri)