When old trains are new again

SRT has refurbished donated Japanese trains for a cosy look to help revitalise tourism, with locals to get a say on routes

Staff from the State Railway of Thailand (SRT) stand next to a newly refurbished Japanese train at Makkasan train maintenance depot. The SRT recently conducted a test run from Bangkok to Chachoengsao. (Photos: Nutthawat Wicheanbut)

Seventeen second-hand passenger train carriages from Japan are set for a new lease of life having now been refurbished ahead of being put into service for short tourism routes from next month, says the State Railway of Thailand (SRT).

On Sept 6, SRT governor Nirut Maneephan took the media on a test run of a train made up of three carriages which have been completely refurbished.

The air-conditioned train rolled out of Bangkok's Makkasan rolling stock maintenance and repair centre and pulled into a railway station in the eastern province of Chachoengsao about an hour later before making its way back to Hua Lamphong station in Bangkok.

The carriages, which were originally designed for Japan's 1.067-metre gauge rail tracks, have been equipped with modified sets of wheels for compatibility with Thailand's one-metre gauge tracks, while their interiors and exteriors have been refurbished. The bodies of the carriages have also been repainted in their original white and lavender colours.

Enthusiasts and members of the public turned up at the stations and along the trial route to take photos of the train.

According to the SRT, refurbishment of the remaining 14 carriages is expected to be completed by the end of next year.

Before being donated to Thailand, the Kiha 183 series served as limited express trains in Hokkaido, Japan's northernmost prefecture and coldest region. The carriages were developed specially to withstand the harsh, snowy winters there.

With a driver's cab elevated for better visibility during snowfall, the Kiha 183 series features a "slant nose" designed to keep snow out of the front of the train while on the move. The Kiha 183 series has a maximum speed of 110 kilometres per hour. 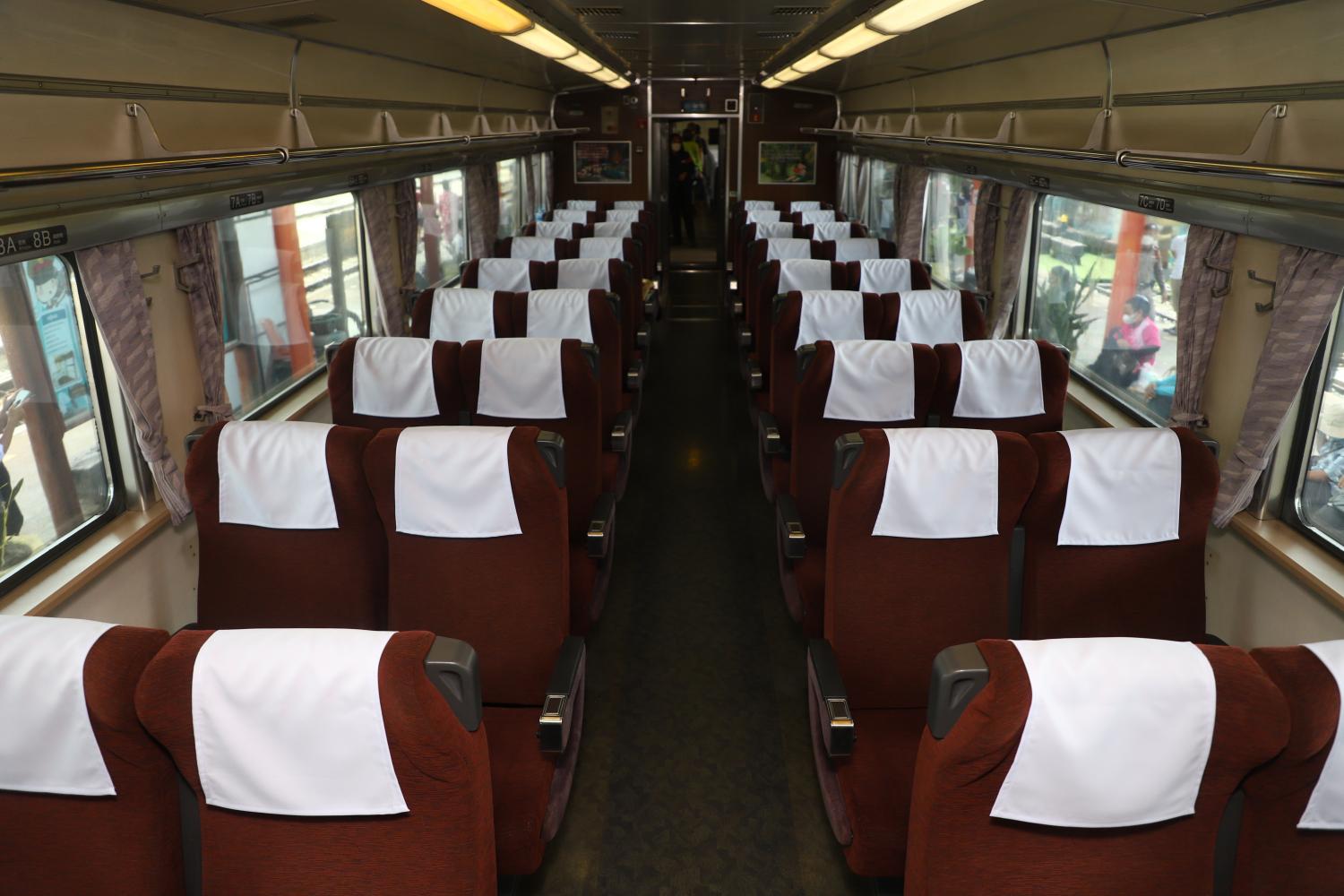 The interior design of a renovated train carriage has a cosy look to welcome passengers. The State Railway of Thailand plans to use the 17 donated carriages from Japan to promote railway tourism.

Mr Nirut said the three renovated carriages will be put into service for day trips next month and the SRT will ask the public for ideas on their preferred tourism routes.

"I will ask the public to vote for tourism routes they want the train to run on such as from Bangkok to Pasak Jolasid Dam in Lop Buri, from Bangkok to Hua Hin in Prachuap Khiri Khan, and from Bangkok to Nam Tok (Waterfall) station in Kanchanaburi," Mr Nirut said.

When it comes to refurbishment, the SRT has tried its best to retain as many of the original characteristics as possible, except for the wheels which have to be converted to fit Thailand's one-metre-gauge tracks, he said.

"While the signs in Japanese in the train's interior have been kept intact to preserve the original feel of the train, English translations have also been added.

Train seats are arranged in pairs on each side of the aisle and they can also be manually rotated to allow passengers to sit face-to-face, he said.

"Initially, some were in doubt about the value of the used carriages. But as it turns out, they are in good working condition and function well," Mr Nirut said.

"The refurbishment was carried out by technicians and cost only about 200,000 baht per carriage while new carriages cost 80-100 million baht each," he said.

"Even though the SRT had to pay 42.5 million baht for the shipment, the outcome of the renovation is worth all the costs and efforts," he said.

He said that all 17 carriages had been in use for about 35 years and after refurbishment, they can be used for at least a further 15 years.

Adisorn Singhakarn, a senior engineer at the SRT's maintenance and repair centre, said the donation of the carriages underscored the amicable relations between the SRT and railway operators in Japan which go back more than 20 years.

"All were refurbished into VIP carriages to cater to tourists," Mr Adisorn said.

"But the latest batch of carriages have the most distinct characteristics expected from a Japanese train," he said.

Deputy government spokeswoman Tipanan Sirichana said the government welcomed the renovation of the carriages, which was cheaper than buying new ones.

The refurbished train will help promote tourism to revitalise the economy, she added.

"Some people criticised the government and dismissed the carriages as scrap metal. But we think the government's decision proved to be the correct one. The high calibre of the technicians involved in the refurbishment also deserves praise," Ms Tipanan said.

The SRT's decision to pay some 42.5 million baht for the shipment of the donated carriages stirred social media controversy about their value.

Some Facebook users asked why Thailand had to pay so much for the used carriages. Many netizens who opposed the idea described the carriages as "scrap metal".