Pictures of young victims stand on top of their coffins at Wat Sri Uthai in Na Klang district of Nong Bua Lam Phu on Friday evening, as funeral services begin for some of those slain at the Uthai Sawan childcare centre. (Reuters Photo)

NONG BUA LAM PHU: Grief-stricken families prepared to begin funeral rites on Friday for 36 people murdered by a sacked policeman who rampaged through a nursery armed with a gun and knife the day before.

After a day of mourning at the scene of the bloodshed, coffins bearing the bodies of the victims — 24 of them children — were transported to temples on flatbed trucks to be handed over to relatives.

He was joined by Deputy Prime Minister Prawit Wongsuwon and other cabinet ministers, who also visited Nong Bua Lam Phu Hospital to give moral support to victims and their families.

At the small, low-slung nursery, officials in white uniforms earlier in the day laid a large floral wreath on behalf of His Majesty the King, who was to visit the province in the evening.

Outside the childcare centre earlier in the day, a line of heartbroken parents placed white roses on the steps as the baking sun bore down.

The dead include pregnant teacher Supaporn Pramongmuk, whose husband posted a poignant tribute on Facebook.

“I would like to say thank you for all the support for me and my family. My wife has fulfilled her every duty as a teacher,” Seksan Srirach wrote.

“Please be a teacher in heaven, and my child please take care of your mother in heaven.” (Story continues below) 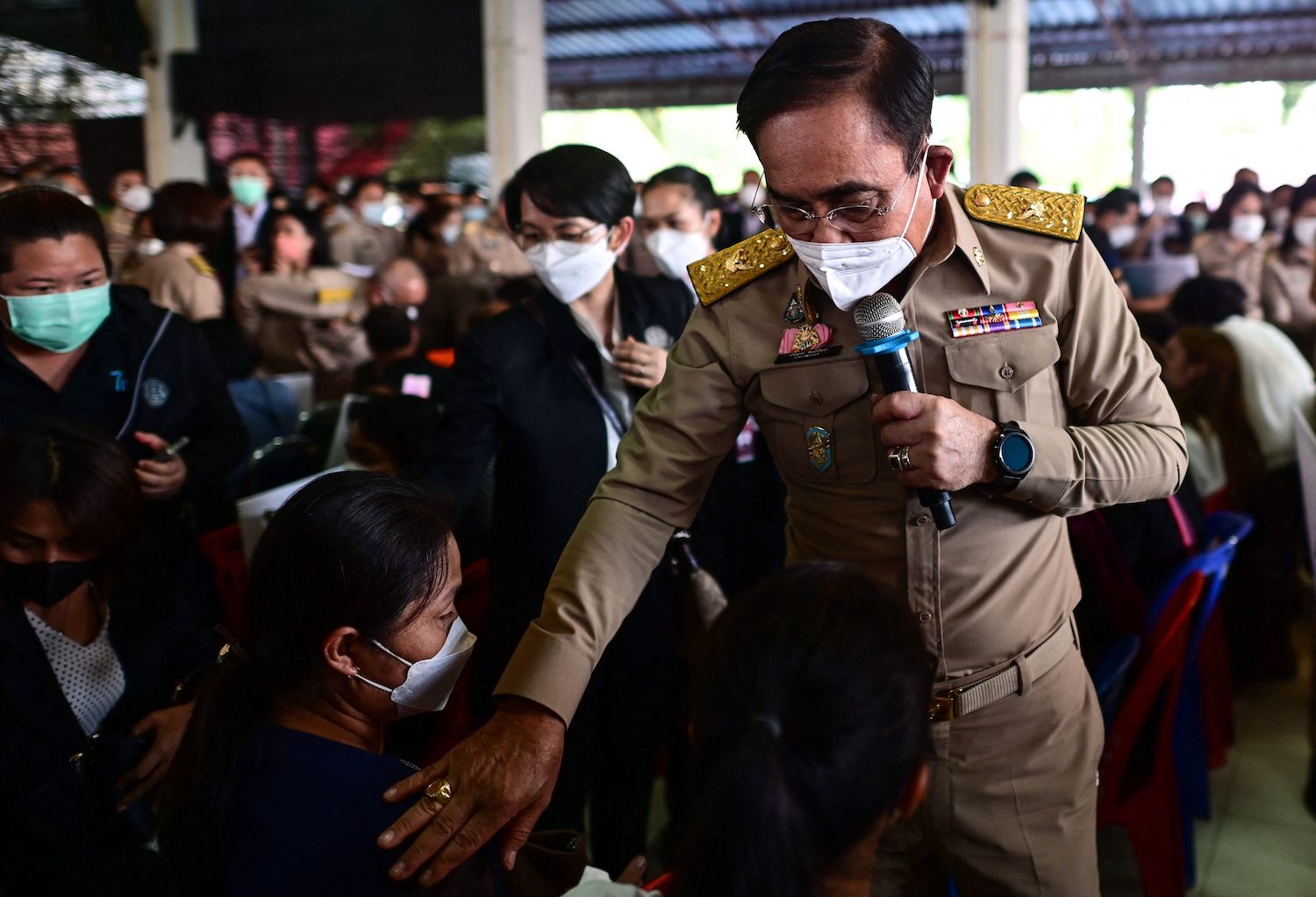 Prime Minister Prayut Chan-o-Cha comforts families and relatives of victims gathered near the Uthai Sawan childcare centre on Friday, a day after 22 children were killed there. (AFP Photo)

Armed with his own legally purchased 9mm pistol and a knife, former police sergeant Panya Khamrab began his murderous spree at the childcare centre at about 12.30pm on Thursday.

Following the attack, he fled the scene in a pickup truck to head home and murder his wife and son before taking his own life, police said.

National police chief Pol Gen Damrongsak Kittiprapas said on Friday that an initial autopsy indicated no drugs were detected in the body of killer, but long-term drug abuse may have left him mentally ill.

It was not clear if Panya was still using drugs regularly, police said.

Pitak Kongtapthai, head of the police investigations unit in the province, said most of the deaths were caused by a combination of knife wounds and gunshots.

Pol Gen Damrongsak said Panya had had an argument with his wife hours before the attack, but “nothing irregular” was noted when he appeared in court that morning on a drugs possession charge.

Panya had risen quickly through the ranks of the police force in Bangkok, before a transfer to the provinces led to his use of drugs, and an abrupt halt to his career, police said on Friday.

No clear motive had been established yet for the rampage on Thursday.

But police said their preliminary investigation indicated the killer was deeply troubled by marital and money problems following his suspension from police duty in January, after he admitted to using two types of methamphetamine.

“He wanted to vent. We learned from his mother that on the day of the incident he was quarrelling with his wife,” local police chief Chakkraphat Wichitvaidya told Reuters.

“He may have wanted to do something bad.”

According to his police record, Panya started his career in Bangkok and worked in two different districts in the capital. He was made lance corporal, then corporal, before being promoted to sergeant in 2019.

Local police told Reuters that Panya’s behaviour changed after he relocated to Nong Bua Lumphu in the northeast.

He kept himself to himself but was sometimes hot-tempered and violent, they said, citing fellow officers who said he fought with colleagues, who were aware of his drugs use.

A woman described as the killer’s mother was interviewed on Thursday by local television, which blurred her face on camera and withheld her name to protect her identity, which Reuters could not independently verify.

She said her son’s behaviour changed when he gave up his life in Bangkok to look after her in the countryside.

“He started using drugs when he moved here after being stationed in Bangkok for six years. He moved here to take care of me,” she told Channel 3.

“He used drugs, didn’t sell them. He would buy them.”

On learning of her son’s killing spree, she said: “I almost fainted. I felt so much sorrow.”