Their Majesties the King and Queen, accompanied by Their Royal Highnesses Princess Bajrakitiyabha Narendiradebyavati and Princess Sirivannavari Nariratana Rajakanya, preside over a royal ceremony to mark the unveiling of a statue of His Majesty King Bhumibol Adulyadej The Great, at the new Chalerm Phrakiat Park on Thursday. The site is open to the public to pay respect to the statue until Sunday from 8am to 7pm. (Photo: TV Pool)

Thousands of people converged at Chalerm Phrakiat Park in Dusit district on Thursday to observe a royal ceremony presided over by His Majesty the King, marking the unveiling of a statue of His Majesty King Bhumibol Adulyadej The Great in remembrance of the late king.

Thursday was the sixth anniversary of King Rama IX's passing.

Bunthrika Saechang, one of the participants at the ceremony, said she left her home in the On Nut area of Bangkok at 3am, intending to have an audience with His Majesty the King and also to volunteer at the palace's mobile kitchen by preparing meals for the guests.

"I have fond memories of King Rama IX, as always," said Ms Bunthrika.

Prior to the royal ceremony at the new park that began at 5pm, Prime Minister Prayut Chan-o-cha led a Buddhist merit-making ceremony at Government House commemorating the anniversary of the beloved late king's passing.

Elsewhere in the country, similar Buddhist merit-making rites were performed in every province to remember King Rama IX.

Afterwards, participants at the religious ceremonies went on performing their good deeds, including helping to clean up public roads and donating food and necessities to the poor -- all as a way of remembering King Rama IX's tireless dedication to his people during his reign.

Joining Thailand's nationwide commemoration of King Rama IX, the British embassy posted on its Facebook page "UK in Thailand" a file photo of the late king sitting next to and conversing with the late Queen Elizabeth II. 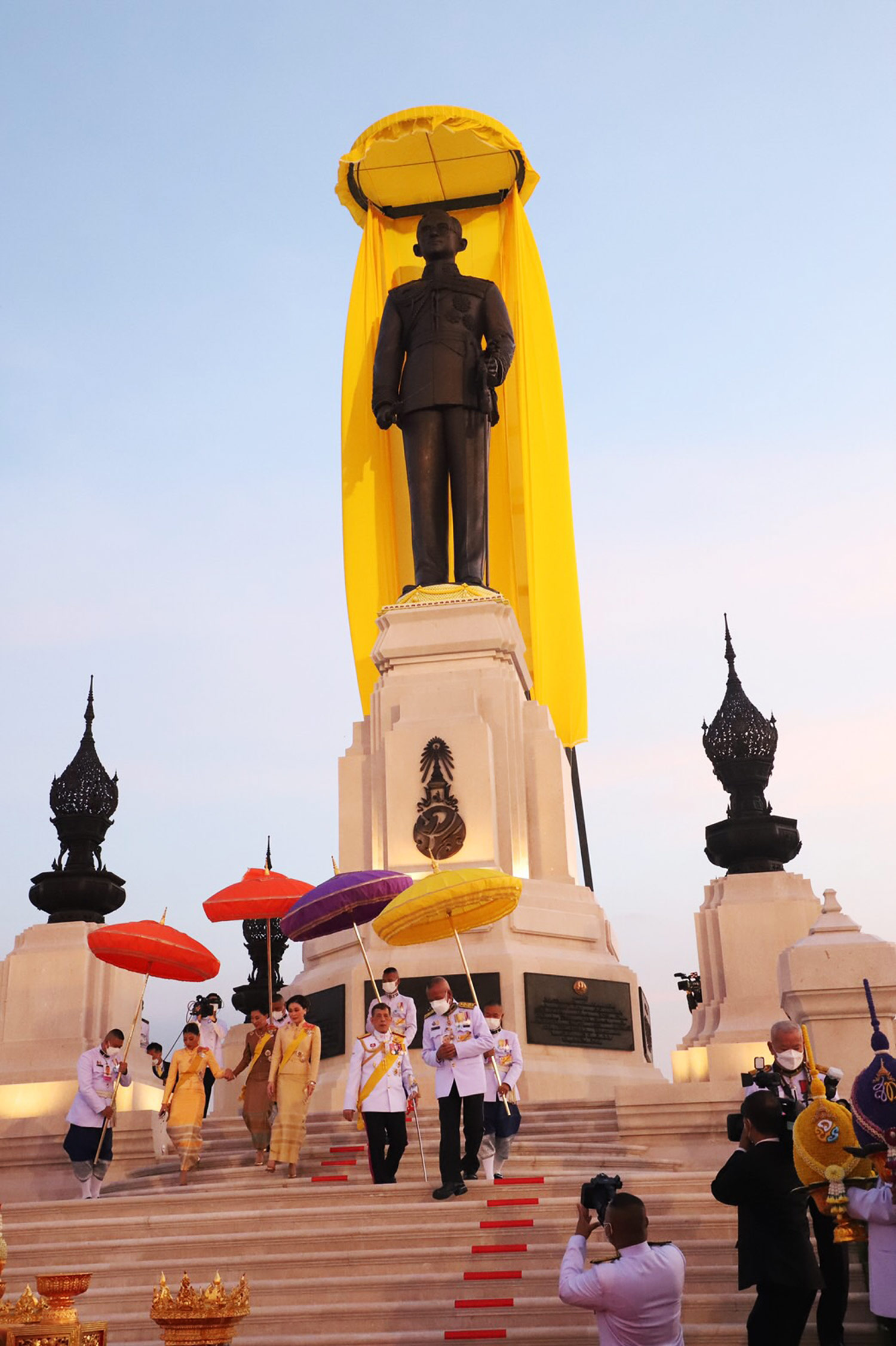 Their Majesties the King and Queen, accompanied by HRH Princess Bajrakitiyabha Narendiradebyavati and HRH Princess Sirivannavari Nariratana Rajakanya, preside over a royal ceremony to mark the unveiling of a statue of His Majesty King Bhumibol Adulyadej The Great, at the new Chalerm Phrakiat Park yesterday. The site is open to the public to pay respect to the King’s statue until Sunday from 8am to 7pm. (Pool photo)

Also seen in the same photo was the young King Rama X, who sat behind his father, while three more photos showed King Rama IX and Queen Elizabeth II appearing together at three different royal receptions.

Along with these memorable pictures was a message reading: "In memory of Her Majesty Queen Elizabeth II and His Majesty King Bhumibol Adulyadej The Great, the two longest-reigning monarchs of the UK and Thailand."

His Majesty the King turned the Royal Turf Club of Thailand (RTCT) into the Chalerm Phrakiat Park in Dusit district in remembrance of King Rama IX and to bring about a huge new green space in Bangkok, said Col Wanchana Sawasdee, deputy spokesman for the Ministry of Defence.

Designed as a forest park covering 279 rai in Dusit district, thousands of new trees will provide the capital with another much-needed "green lung" where people from near and far can unwind from the hustle and bustle of the city and get in touch with nature. 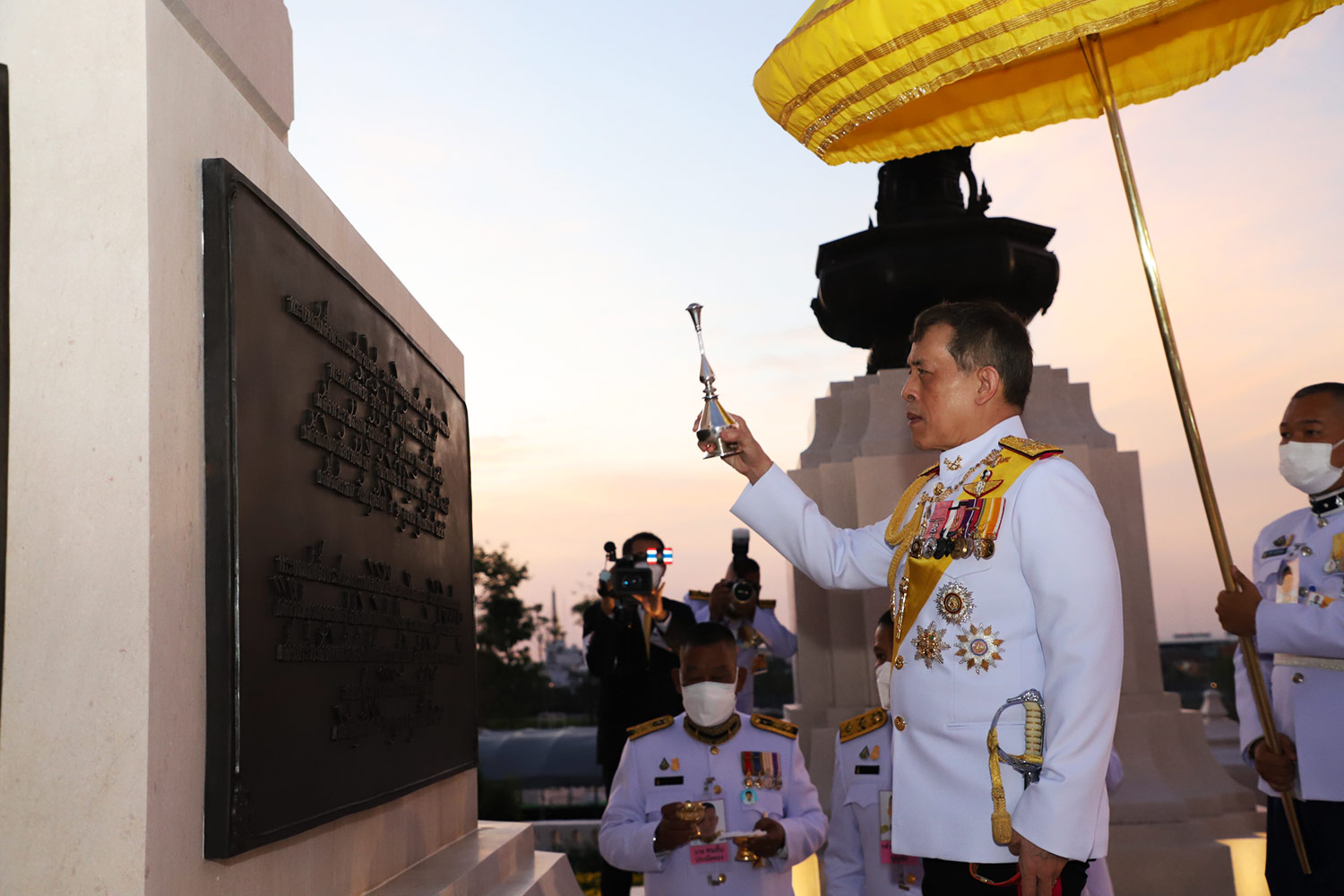 His Majesty the King sprinkles holy water at the base of a statue of His Majesty King Bhumibol Adulyadej The Great at Chalerm Phrakiat Park in Dusit district yesterday. (Photo: Pattarapong Chatpattarasill) 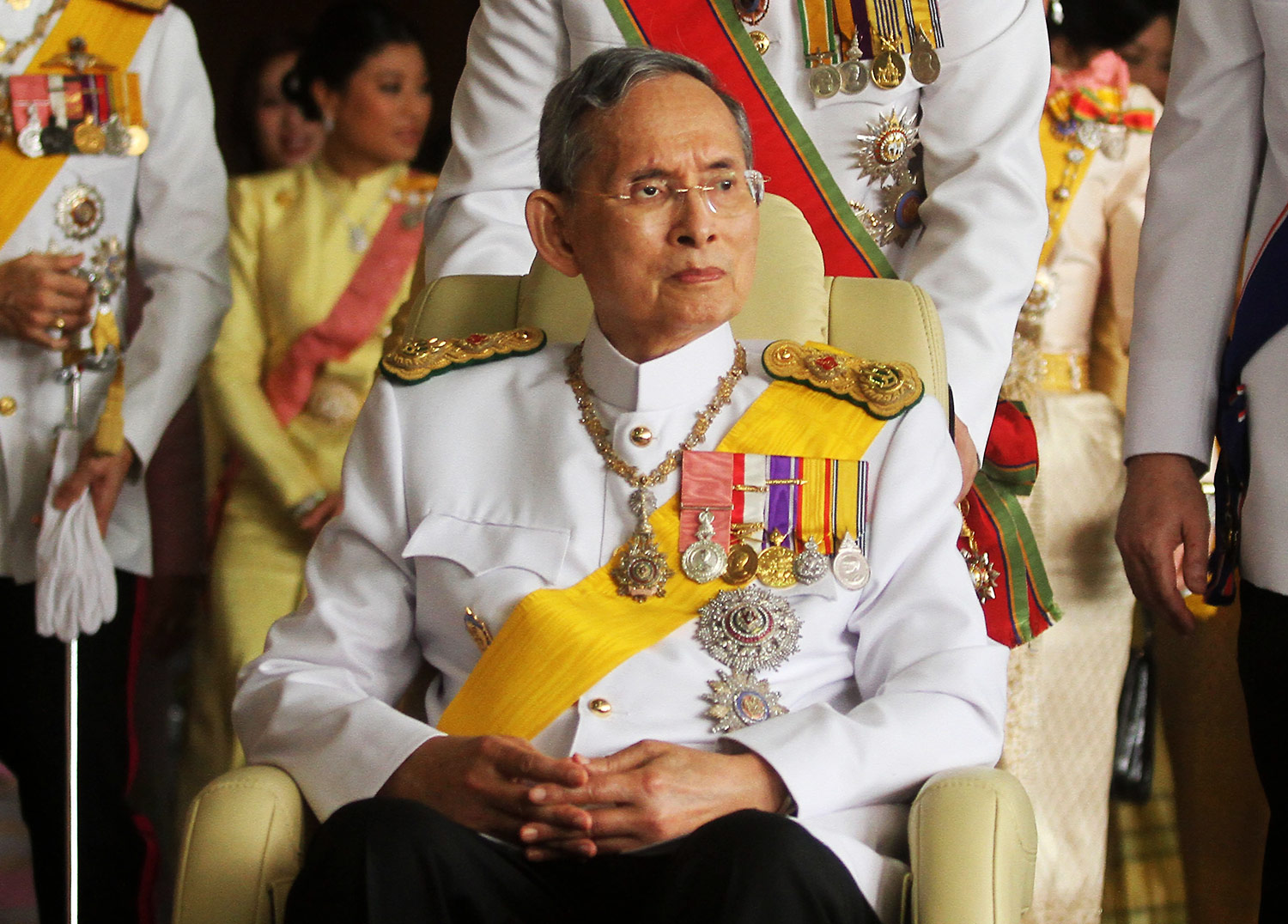 A file photo of His Majesty King Bhumibol Adulyadej The Great in 2010 when he left Siriraj Hospital for the Amarin Winitchai Throne Hall at the Grand Palace to receive people’s best wishes on his 83rd birthday. (Photo: Pattanapong Hirunard)

The park will be dotted with reminders of King Rama IX and Her Majesty Queen Sirikit The Queen Mother, giving visitors an opportunity to learn about their contributions to forest and water resource management.

In November last year, the Bureau of the Royal Household unveiled a virtual design for the public park which is expected to be completed by the end of 2024.

Design work began in 2018, with a statue of King Rama IX surrounded by a lake constructed in the shape of the Thai numeral for nine always intended to be the centrepiece.

Thursday's historic ceremony reminded him of the ceremony conducted during the unveiling of the equestrian statue of King Chulalongkorn at the Royal Plaza, said Col Wanchana.

When His Majesty the King reclaimed the RTCT's land, rumours spread by some groups with an intention to provoke dislike against the monarch claimed a new palace would be built on this land. The presence of the new park has proved them wrong, he said. 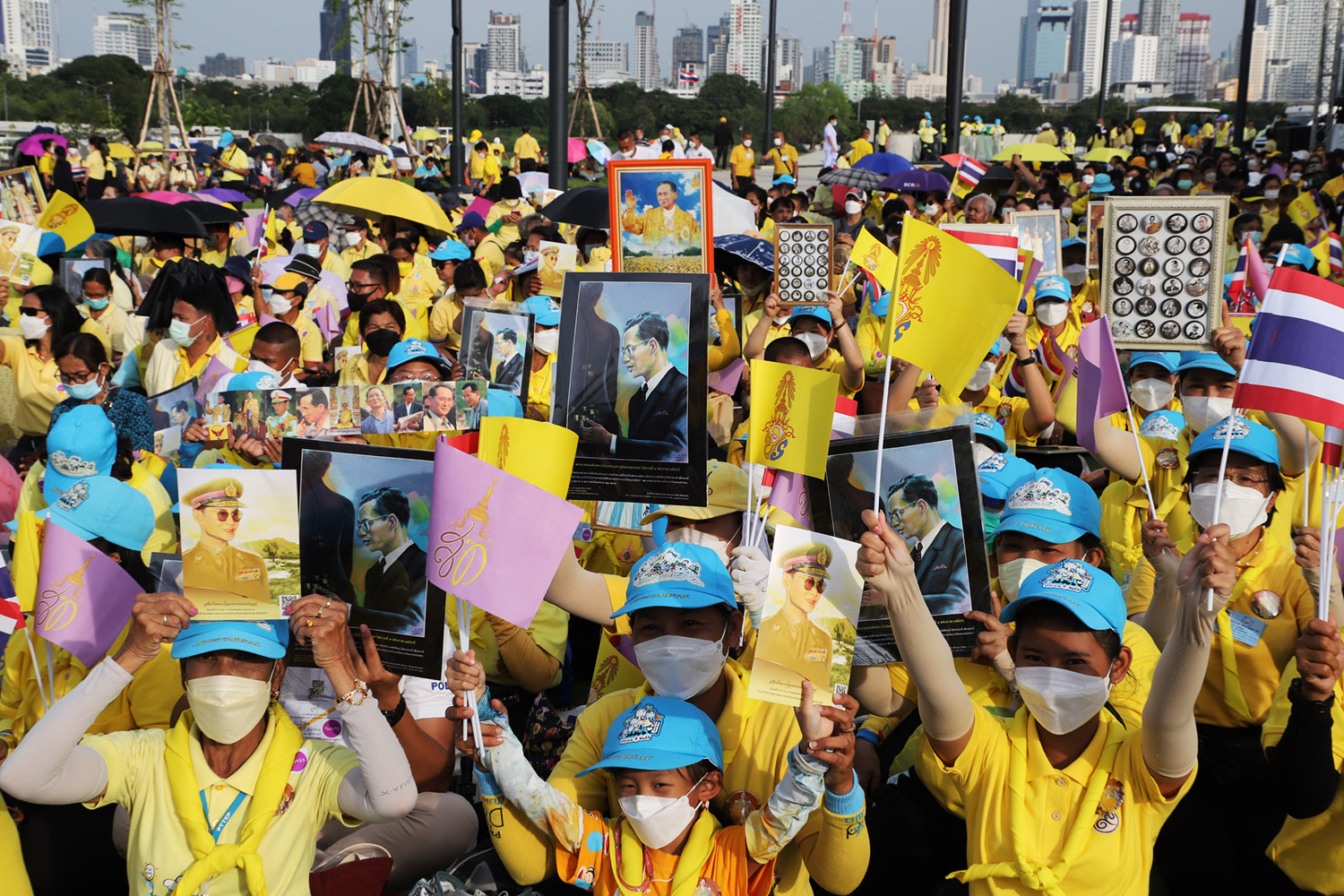 People don yellow T-shirts and hold pictures of King Rama IX while joining the ceremony to mark the unveiling of the statue of the late king yesterday. (Photo: Pattarapong Chatpattarasill) 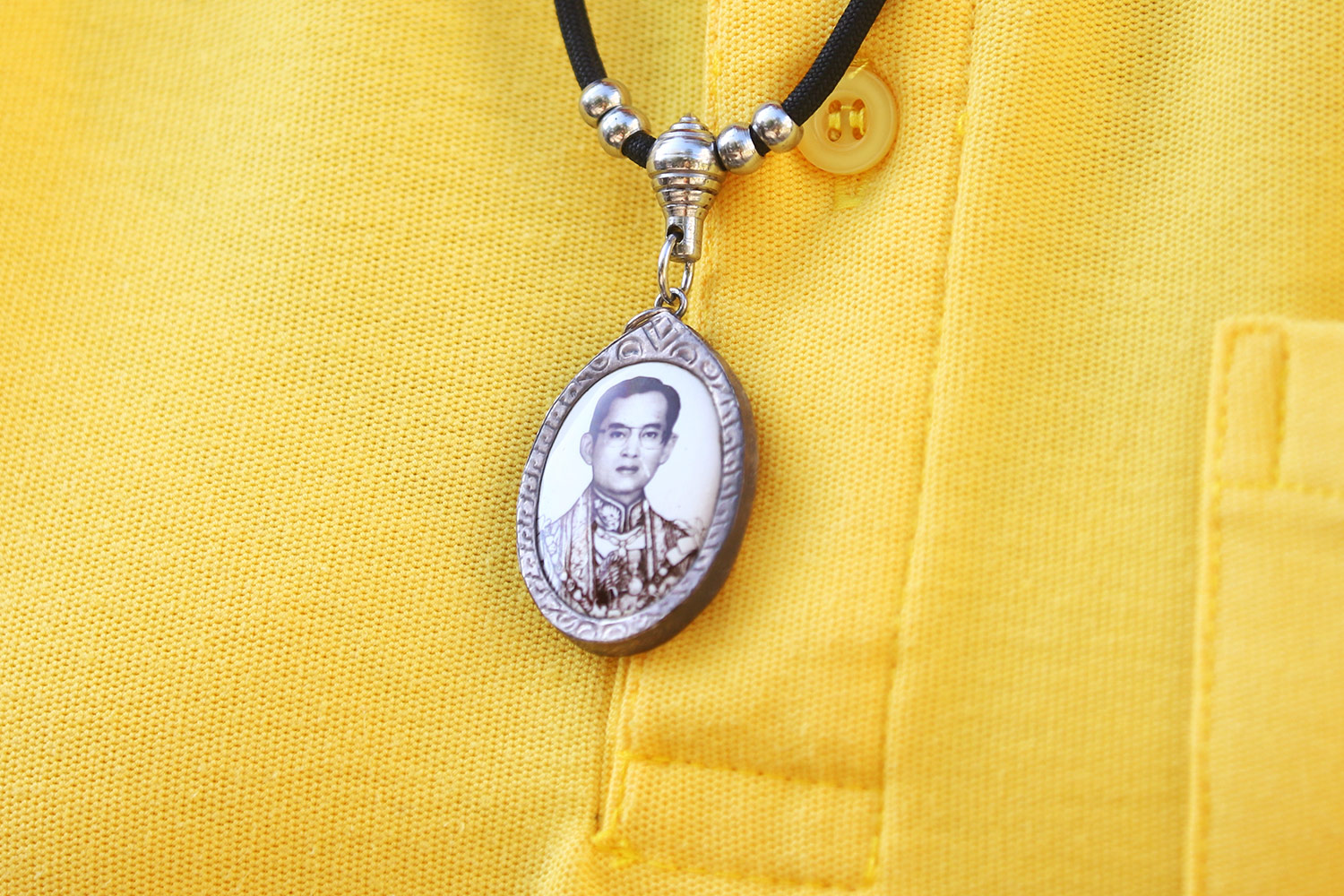 A local resident wears a locket showing a picture of King Rama IX to show how he is always in people’s hearts. (Photo: Nutthawat Wicheanbut) 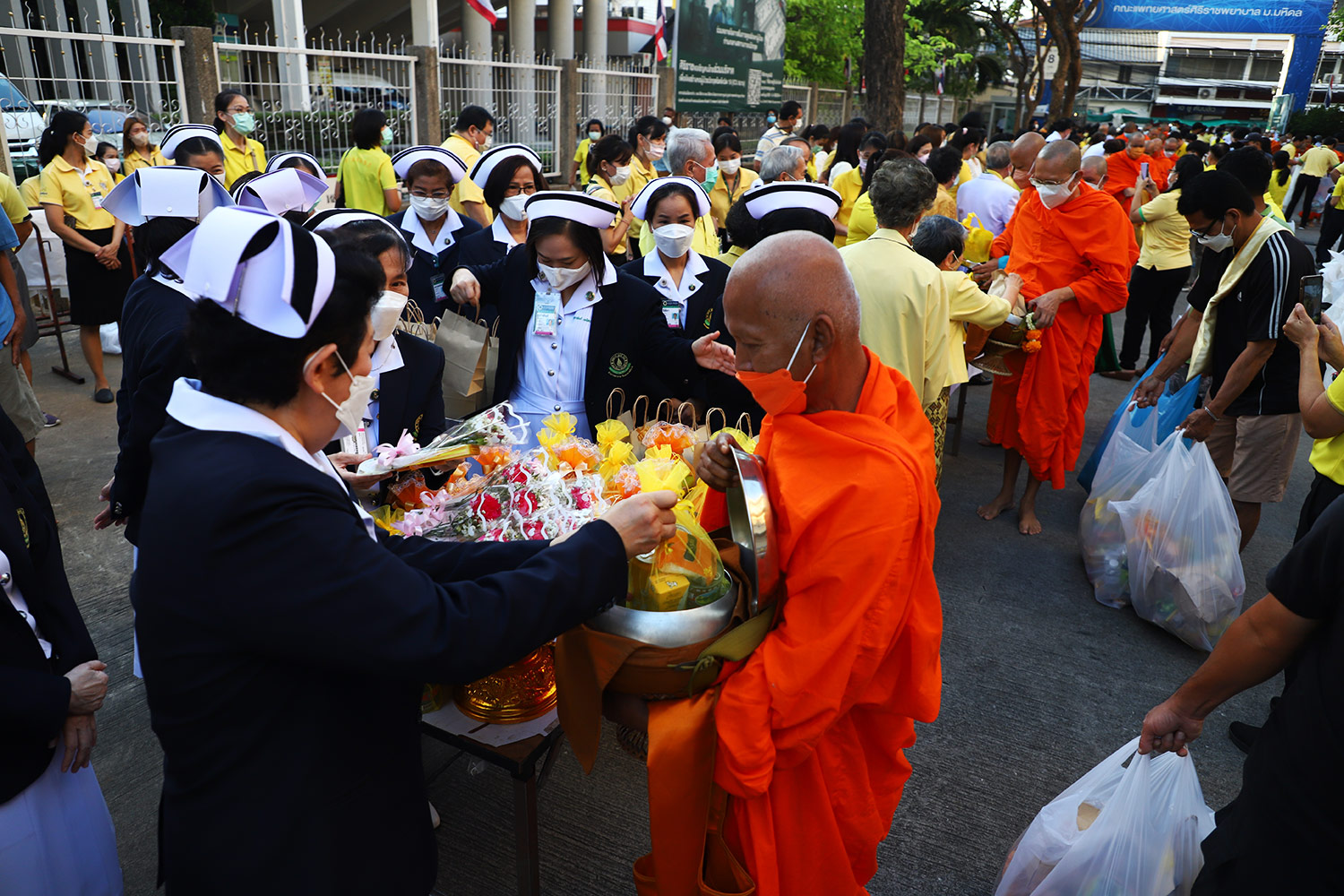