The Fuxing Hao CR300 train made by China's CRRC, which will run between Bangkok and Nakhon Ratchasima. (Photo: State Railway of Thailand)

The contract governing the Thai-Chinese high-speed railway construction may need to be renegotiated, as construction of the project's first phase between Bangkok and Nakhon Ratchasima is now falling behind schedule, a source at the Transport Ministry said.

The first phase, which is divided into 14 different contracts, is only 15% completed when it should have been 37%, according to the source, citing information reported at a meeting of the Thai-Chinese joint committee on the project's implementation.

The meeting on Monday was chaired by Transport Minister Saksayam Chidchob and attended by a deputy director of China's National Development and Reform Commission (NDRC).

The delay was largely blamed on Covid-19 pandemic restrictions, significant hold-ups in the land expropriation process, and the relocation of public utility lines from around the construction site, the source added.

The project’s 50.6-billion-baht main contract — known as Contract 2.3, which covers the railway system, rolling stocks, staff training and technology transfer for the 253-kilometre line from Bangkok to Nakhon Ratchasima — has a deadline of March 2026, said the source.

Under the current circumstances, the contract will have to be extended, said the source. 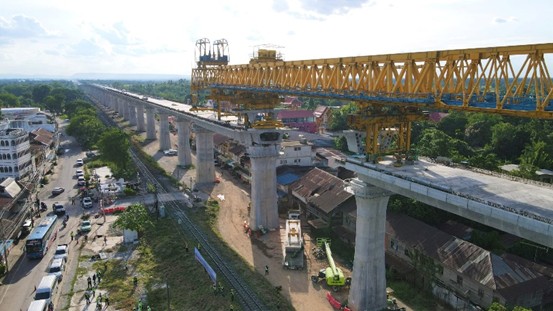 Construction of the Thai-Chinese high-speed railway. (Photo: Ministry of Transport)

Mr Saksayam said on Tuesday Laos will take part in a meeting with Thailand and China  early next year to formally discuss the plan to connect the Thai-Chinese high-speed rail system with Laos’ rail network.

The progress report presented in Monday's meeting would be forwarded to Chinese President Xi Jinping through the NDRC, he said.

As for the plan to construct a new Thai-Lao Friendship bridge, China has expressed its willingness to help in every process, he said, adding that the new bridge’s location will not be far from the existing ones.

The informal agreement was reportedly reached while the two leaders attended a ceremony held on Oct 28 to lay the foundation stones for the fifth Thai-Lao Friendship Bridge.