The head of the Department of National Parks, Wildlife and Plant Conservation was arrested at his office in Bangkok’s Chatuchak district on Tuesday on charges of demanding or receiving bribes and malfeasance in office.

A team of police led by Counter Corruption Division (CCD) commander Pol Maj Gen Jaroonkiat Pankaew arrived at the department’s Sueb Nakhasathien Building in Lat Yao area on Tuesday morning and took director-general Rutchada Suriyakul Na Ayutya away to hear the charges against him at their head office.

Mr Rutchada had earlier issued an instruction not to give him any gift baskets or presents, only New Year best wishes.

The police action in storming suddenly into the meeting room caught the department chief off guard and bewildered the other executives, officials and well-wishers who were there.

The police took Mr Rutchada away to hear and acknowledge charges of demanding or agreeing to accept bribes or other benefits for his personal gain, abuse of authority and malfeasance in office.

The arresting officers searched Mr Rutchada’s office before taking him to the CCD office for legal proceedings. They found about 5 million baht in cash during the search and impounded it as evidence for further examination.

Mr Rutchada was appointed director-general of the department in February.

"Officials arrested him while the money was being exchanged, so the evidence was quite clear," the CCD chief said, AFP reported.

Niwatchai Kasemmongkol, secretary-general of the National Anti-Corruption Commission (NACC), gave more details during an afternoon media briefing on the case.

He said the national anti-graft agency and police investigators from the CCD found grounds to allegations that Mr Rutchada had demanded monthly bribes from officials wanting to retain their positions and those wanting to move to better positions.

Those who refused to give the department chief money would be unfairly transferred, Mr Niwatchai said.

The NACC and the CCD investigators then planned a sting, with one damaged party asked to hand an envelope containing 98,000 baht to Mr Rutchada at his office at 9.10am on Tuesday.

The arresting team had evidence - the envelope containing the bribe money and an audio recording conservations demanding the bribe - to arrest the accused department chief,  the NACC secretary-general said during an afternoon media briefing on the case.

During the search of Mr Ratchada’s office another 4.9 million baht cash was found in a safe.

Mr Niwitchai said he believed many government officials were forced to pay money to their boss.  The investigation was being extended, he added.

The NACC was duty-bound to investigate allegations of corruption by state officials, he said.  As a complaint had been filed with police, the officers would submit their investigation report to the NACC within 30 days, he said.

Pol Maj Gen Jaroonkiat said Mr Rutchada denied the charges during questioning. He admitted to accepting the envelope but said he was unaware it contained cash, claiming he had yet to open it. The department chief had yet to explain origins of money found in the safe, the CCD commander said.

He was confident that police had the evidence to take action against the department chief. Phumwisan Kasemsuk, secretary-general of the Public Sector Anti-Corruption Commission (PACC), urged all government officials not to accept such conduct from their superiors.

His arrest came after Chaiwat Limlikit-aksorn, former head of Kaeng Krachan National Park in Phetchaburi, had earlier filed a complaint with CCD police against Mr Rutchada, accusing him of abusing his authority in transferring officials who refused to pay him 500,000 baht to positions far away from their home provinces.

Mr Rutchada would collect 18.5% of the budgets allocated to national parks and wildlife sanctuaries, and 30% of the budgets received by forest fire prevention units, Mr Chaiwat alleged.

Police began an investigation after receiving the complaint, and later decided to press charges against the department chief.

Jatuporn Buruspat, permanent secretary of the Ministry of Natural Resources and Environment, said he was shocked by Mr Rutchada's arrest. A civil service fact-finding committee had been set up to look into the bribe-taking allegation and would give its findings in seven days, Mr Jatuporn said. 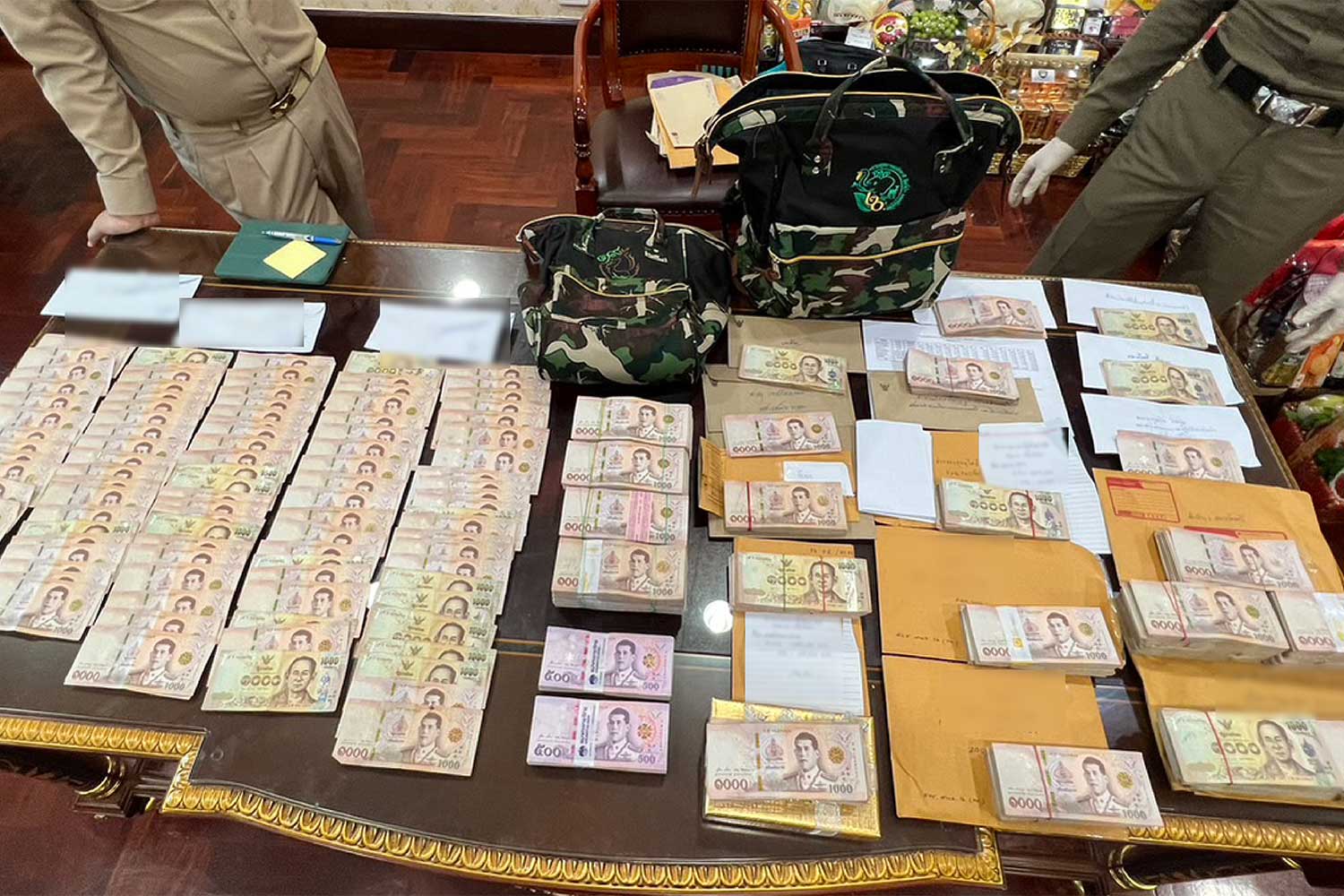 Police display money seized from the office of the head of the Department of National Parks, Wildlife and Plant Conservation during a search on Tuesday. (Photo supplied/Wassayos Ngamkham) 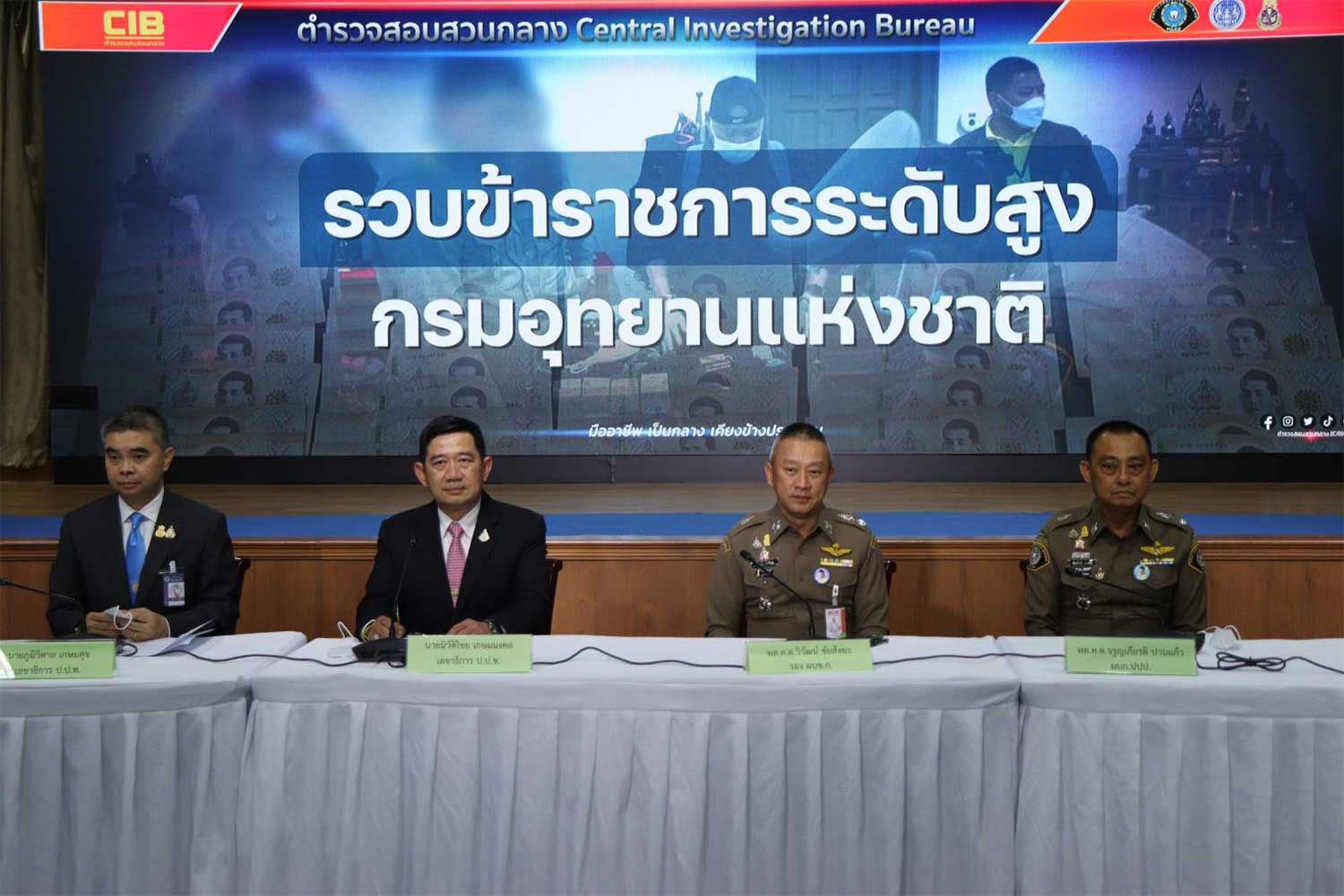 Police and senior officials from two anti-graft agencies hold a media briefing about the arrest of the head of the Department of National Parks, Wildlife and Plant Conservation. (Photo supplied/ Wassayos Ngamkham)