A selection of craft beer is seen on tap at a beer festival in Bangkok in October last year. Thai entrepreneurs are calling on the government to simplify the requirement for running small-scale distilleries in the country. (Photo: Surasak Glahan)

With the onerous liquor laws that have let just a few large breweries dominate the market and have forbidden entry by small-scale newcomers for decades, Chiang Mai native Saksit Sanguanphon was forced to fulfil his dream to produce his own artisanal craft beer somewhere else. He went to Laos.

As it is for other Thai entrepreneurs, running a small-sized craft beer business is a struggle for Mr Saksit. It all began with a long bus journey from Bangkok to Savannakhet almost a decade ago.

"I took a Nakhon Chai Air bus at 8pm from Vibhavadi Rangsit Road, slept over in Mukdahan and arrived in Savannakhet at six in the evening the day after," Mr Saksit recalls.

"I went to Savannakhet to brew, and then I brought the products back myself to Thailand for sale in Chiang Mai," he says.

His dream of running a craft beer business began in Colorado, the United States, where he was pursuing a master's degree.

"Our college organised a tour to a beer festival where we found many craft beer brands," he says.

"In the US, there was a craft beer maker called Golden City Brewery. It prompted me to come up with an idea to have my own Chiang Mai City brewery," he says.

But he lacked know-how, so he began to learn from books he purchased on Amazon and then tried brewing beer while he was still in the US.

Tasting his own beer for the first time, he told his friends he would brew craft beer for sale when he returned to Thailand.

Once back in his native country, he decided to invest all of his one-million-baht savings in a Chiang Mai craft beer start-up he co-founded with two high-school friends, each of whom also invested one million baht. But their registered capital of three million baht was still much lower than the minimum investment of 10 million baht required by the then law. That forced them to run their business in Laos where there are no such onerous rules.

They had to buy malted barley from Singapore and bottles from China, transporting them all the way from Bangkok to Laos for brewing and packaging.

"We rented a brewery in Laos. The monthly production capacity for our beer then was 500,000 litres," says Mr Saksit.

A few years later, in 2018, they moved their production base to Phnom Penh, Cambodia.

"The name of our beer is Chiang Mai, but there's nothing in it which represents the city. It is 'Thai beer' brewed in Cambodia by a Briton at a brewery operated by an American," says Mr Saksit.

"If the laws are changed to allow us to operate legally in the country, I will have a brewery in Chiang Mai, and then I can really sell it as Chiang Mai beer." 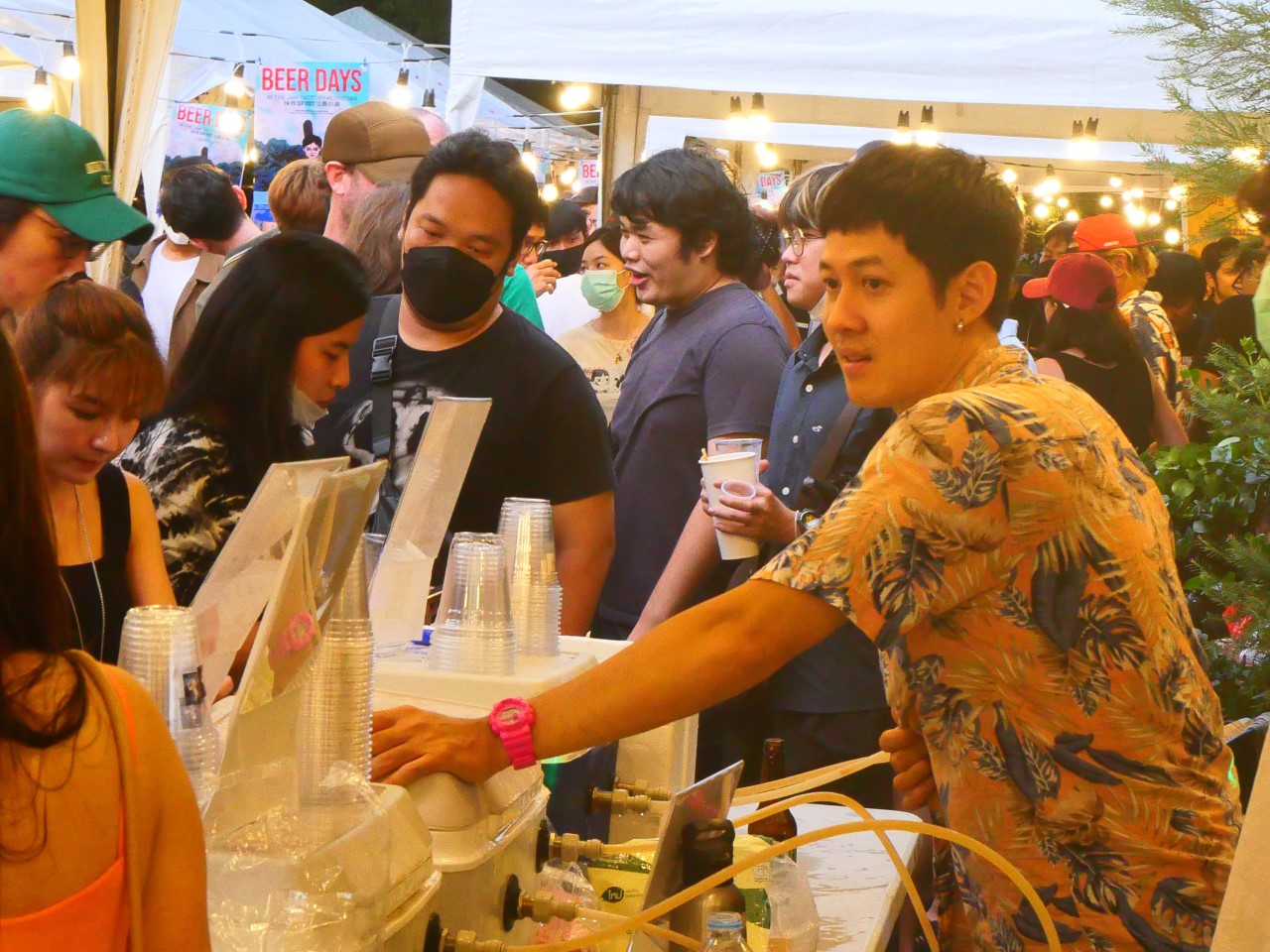 Laws 'that serve the rich'

To the surprise of many, the laws did change. In early November 2022, as the opposition was preparing to have a bill amending the Excise Tax Act -- that, if passed into law, would put an end to the oligopoly of the liquor industry -- have its second reading in parliament, the government out of the blue issued a ministerial regulation amending the Excise Department's regulation. But critics said the new regulation does not unlock the onerous rules as claimed by the government. It merely lifts a number of restrictions, including the requirements that brewers and distillers must have registered capital of at least 10 million baht and produce at least 10 million litres a year. It also does away with the rule that brewpubs must produce at least 100,000 litres a year.

Move Forward Party MP Taopiphop Limjittrakorn said the new regulation puts a new wall in front of small players. For instance, it adds a requirement that brewers and distillers must conduct an environmental impact assessment (EIA). While the cost of conducting an EIA is too high for small players, he said the environmental law also requires that a brewer must produce at least 7.2 million litres per year to be eligible to even seek an EIA.

The regulation also imposes other measures that make it still more difficult for small players to enter the market, he said.

"The new ministerial regulation is obviously different from the content of the bill [that aims to liberalise the industry]. It is highly conservative," said Mr Taopiphop.

He questioned why the new regulation is made in a way that still benefits a few behemoths.

The history behind the oligopoly in the spirits and beer industries is long. It started with the Liquor Act 1950 that forbids the production of alcoholic beverages unless granted a permit granted by the state.

Since Thailand became a constitutional monarchy in 1932, these laws and rules have never been changed to give small-scale producers a stake in the lucrative beer and spirits industries. Instead, they have cemented the domination of a handful of behemoths.

Established in 1933 by Boon Rawd Brewery Co under a concession previously granted by King Rama VII, Singha has dominated the beer industry for almost six decades from 1966 to 2004 (with only one unsuccessful rival ever competing on a more even playing field; state-run Thai Amarit Beer). In 1991 the Anand Panyarachun government started the so-called "liberalisation" of beer. But that resulted in the arrival of just a handful of local and foreign brands, such as Chang beer from Thai Beer Co (now Thai Beverage Co), owned by the Sirivadhanabhakdi family, and then the Heineken and Tiger brands brewed by Thai Asia Pacific Brewery Co.

In 2000, there was another round of so-called liberalisation of the beer and spirits industries under the Chuan Leekpai government. That was when the previous rules were written, including the 10-million-baht threshold.

"The value of 10 million baht in that time was considered very high, much higher than its value today," says Achiravas Vanasrisawasd, Executive Director of iSTB Co, the beer Go distributor. Citing his own experience, Mr Achiravas says the financial restrictions made it very difficult for small players to enter the market.

The onerous laws have enabled the few beer behemoths to enjoy their domination of a lucrative industry that produced revenues of 260 billion baht in 2020 despite a contraction caused by the Covid-19 pandemic. The regulations forced small-scale newcomers to go abroad to brew their craft beers in places like Vietnam, Cambodia, Laos and Australia. They then imported the products into Thailand bearing shipping costs, excise tax and import tax (for importation from non-Asean countries).

That resulted in higher prices for craft beers to the detriment of the consumer. It also limited opportunities for micro-brewers to sell their products overseas as 'Thai craft beers', Mr Achiravas says, because despite the boom in craft beer in the last five years, Thai craft beer producers who have their products brewed and packaged in other countries find it hard to sell in third countries such as the US due to confusion over "the origin of the product".

"We once received an order from the US and then proceeded to file our products with the US Food and Drug Administration. We passed every criterion except the origin of the goods," says the businessman.

"This is because even though we had a Thai barcode and a Thai name, our products were made in Cambodia. The FDA rejected us because they worried that this could confuse consumers," he says.

"Production of craft beer in Thailand should be possible because it will create a local ecosystem such as the production of bottles and cans and the importation of raw materials like malt," he says.

In the past, calls from civil society to liberalise the two industries have failed. The Finance Ministry and its Excise Department usually argued that liberalisation could compromise product safety standards and boost alcohol consumption.

But Mr Taopiphop rejects the argument. He said if the ministry is really worried, it should instead set up mechanisms to ensure quality control and curb substandard products.

Mr Achiravas agrees that the state has numerous mechanisms to put this into practice.

If and when the industry is really liberalised, Mr Achiravas foresees an explosion of small brewers in the market, rushing to capitalise on the long-overdue opening-up of a profitable sector.

The Move Forward Party estimates that the liberalisation of the industry would result in over 10,000 new entrepreneurs creating many jobs and economic opportunities for local communities with a value of at least 30 billion baht a year.

The party also says that farmers will benefit from the change in the laws because there will likely be an increase in the market values of many agricultural products such as rice, sugarcane, corn and a variety of fruits. Growers of these products, which are perishable in nature, are often forced to sell them at low prices or simply dump them if there are surpluses in the market.

For Mr Saksit, the new regulation does not bring much hope to a small player like him. For now, Phnom Penh will remain the brewing base of his beer. "I feel that the state still enables an oligopoly," he said.