Seh Daeng case to be re-opened 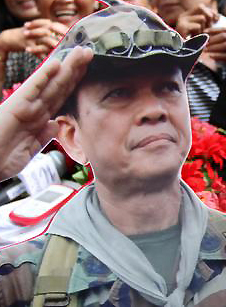 It now appeared the two bullets that hit Seh Daeng were fired from an unidentified location in front of the Dusit Thani Hotel, on Sala Daeng intersection, Silom, not from the vicinity of Chulalongkorn Hospital, on the opposite corner of the intersection, according to Mr Chalerm.

After the shooting, a police officer attached to the Metropolitan Police Bureau made a phone call to another officer in another province to inform him that Seh Daeng was dead.  However, further investigation was needed before police could seek arrest warrants, he said.

Seh Daeng was head of the Red Guard.

Mr Chalerm claimed investigators could identify all the suspects in the case. He said some police officers who were “dressed in black” were likely to have been involved.

Last month, Mr Chalerm also claimed a group of senior police officers were behind the killing of Seh Daeng.

Seh Daeng was shot in the head by an unidentified sniper as he concluded an interview with foreign reporters at Sala Daeng intersection during the political violence on May 13, 2010. He died four days later.