The United States embassy has issued a terrorist travel warning to its citizens for Thailand and alerted them to avoid certain popular tourist areas in Bangkok such as Khao San road. (Photo by Sayant Pornnantharat)

The Criminal Court has approved a warrant for the arrest of another terrorist suspect, national police chief Priewpan Damapong said on Thursday, but he didn't name him. 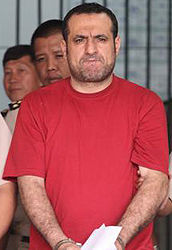 Police have charged the unnamed male suspect with possession of ammonium nitrate in violation of the Arms Control Act.

A police sketch of his face has been issued based on the testimony of detained Lebanese Hezbollah terrorist suspect Hussein Atris, Pol Gen Priewpan said.

He said the name of the second suspect could not be revealed at this time as it might affect the investigation.

According to Mr Atris, the suspect also went to the building in Mahachai, Samut Sakhon,  where police found a huge cache of explosive materials on Monday.

Pol Gen Priewpan said police are prepared to work with Interpol to track him down.

Investigators had also found out that the terrorist group planned to rent 10 cargo containers to transport bomb-making materials to a third country, he said.

The police chief said the United States' travel warning to its citizens for Thailand remains in force, but he believed the US would lift it soon because the terrorist group's target is not Thailand.

Mr Watchara said, the ministry had not found any unusual cancellations of hotel bookings or flights.

Mr Chumpol planned to set up a committee to find ways to deal with any problems if the US refuses to revoke its travel warning, Mr Watchara said.

The US embassy has alerted the Americans in Bangkok to avoid Khao San road and Sukhumvit soi 22 - areas that are popular with foreign tourists.

There is a large Jewsih community centre in a sideroad off soi 22.