The military is backing rangers who shot dead four Muslims and injured four after angry locals claimed innocent people had been targetted. 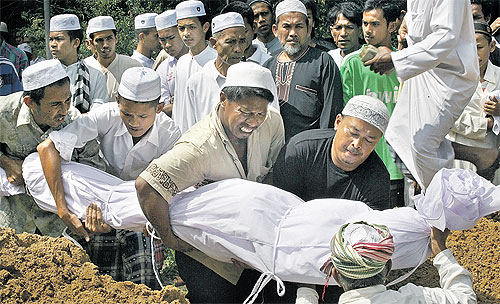 Muslim men yesterday bury the body of a man who was shot dead by military rangers on Sunday night.

Authorities claimed someone in the vehicle opened fire on the rangers, prompting them to return fire, killing four and injuring four on the vehicle. One person managed to escape unhurt.

The four dead people were identified as Ropa Bueraheng, 18, Isaman Dueramae, 55, Saha Samae, 62, and Hama Sani, 65. The four injured were the driver, Ya Dueramae, 58, Ma-ae Doloh, 76, Maruding Waekaji, 15, and Sobree Bueraheng, 19. Adbullah Ni, 15, was the only one of the survivors who managed to escape unhurt.

The injured were taken to Nong Chik hospital and were reported to be making a swift recovery. Mr Ya was discharged yesterday.

The four dead people were buried yesterday at a Muslim cemetery in a funeral ceremony attended by many local Muslims.

The incident caused outrage among residents and relatives of the dead and injured, who said the military had overreacted and tried to brand innocent people as insurgents.

Mr Maruding, one of the injured, said his group was coming back from prayers at a funeral at Ban Thung Pho in tambon Lipa Sa-ngo in Non Chik district. He said it was very dark when the pickup truck reached the scene where the vehicle was called to stop. Mr Maruding said a burst of gunfire broke out as the pickup slowed down.

"I had no idea who shot us and we did not shoot back because we did not carry any firearms," he said. "I had to run for my life. I don't know why they had to shoot us."

The assailants fled in a pickup truck, prompting military rangers to send forces to try to intercept the vehicle, Maj Gen Akara said.

Around 8.50pm, a pickup reached the scene, with two motorcycles riding alongside. When the rangers waved them down, the pickup truck was moving backwards from the checkpoint until it went off the road and into a roadside ditch, Maj Gen Akara said. The two motorcycles turned back and managed to escape.

He said when the rangers tried to search the pickup, one of the passengers opened fire, prompting the rangers to return fire. After the gunfight ended, the rangers found four people dead and four injured.

Two firearms, an AK-47 and a 11mm pistol, were discovered in the vehicle, Maj Gen Akara said.

He said the firearms and the vehicle could serve as evidence to find its owners and those involved.

He said it has not yet been confirmed if all of those in the vehicle were linked with the insurgency, pending the results of forensic tests.

However, he said those in the pickup truck might have been used by insurgents as human shields. Maj Gen Akara said the insurgents who attacked the military base might have used the vehicle to escape and innocent people could have been victims of the insurgents' subterfuge.

Maj Gen Akara said the rangers had now been sent to meet local people, particularly the angry relatives of the dead and the injured, to try to explain the situation to them.

"The suspects claimed they were on their way to a religious ceremony. That was just an excuse. Why would you need to bring so many weapons to a religious event?" he said.