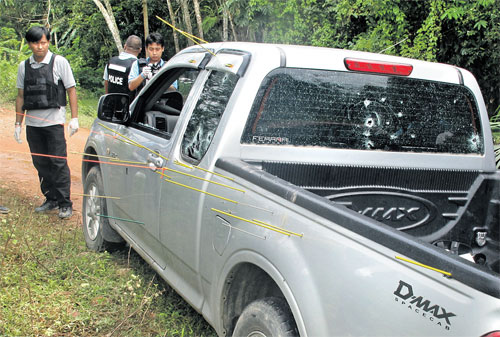 Police inspect a pickup truck riddled with bullets at the scene where four people were shot dead and four injured by military rangers in Pattani’s Nong Chik district on Sunday night. ABDULLOH BENJAKAT

"From a preliminary investigation, the four dead were not involved with the insurgent group," Gen Yuthasak said. He promised to shed light on the killings in the deep South which have outraged both local residents and human rights activists.

An investigation panel has been set up by the 4th Army Region to probe the deaths and clarify the rules of engagement issued to rangers in the wake of the four deaths and four injuries in Nong Chik district on Sunday night.

The results of the investigation will be released shortly, Gen Yutthasak said.

Another fact-finding committee will be set up by Pattani governor Theera Mintharasak.

Gen Yutthasak promised the rangers would feel the full force of the law if they are found to have wrongly killed civilians. The army stood ready to apologise to the families of the victims and compensate them for the loss of life. Those found guilty had to be held accountable, he added.

However, the deputy prime minister insisted the AK-47 and 11mm pistols found in a pickup used by the victims were not planted by the rangers as some people have alleged.

Although the preliminary report pointed to a shooting of civilians, one military leader yesterday said they would wait for the final report into the killings instead of jumping to any conclusions now.

Fourth Army chief Udomchai Thammasarorat said after a meeting of all those involved in the shooting that it could not be yet determined who was to blame as the two sides gave contradictory accounts.

Lt Gen Udomchai, who is also director of the forward command of the Internal Security Operations Command (Isoc) Region 4, said the command strictly adhered to the rule of law and human rights principles.

"As we acted in line with the plan, I will take responsibility for the operation, be it a success or a mistake," he said.

Army chief Prayuth Chan-ocha yesterday said he could not confirm who was the guilty party.

"Right now, I cannot say who was right or wrong," he said. If the four dead people were innocent, they might have not understood an order to stop their vehicle and this could have created a misunderstanding, he added.

"If this is a misunderstanding, compensation must be paid [to the relatives of the victims] and punishment must be meted out to [the rangers]," Gen Prayuth said.

The transfer order was aimed at mollifying local residents who were angered by the deaths, a military source said.

At the same time, nearly 200 soldiers from Phaya Insee from tambon Huay Nam Yen in the district were deployed to replace the military rangers at the bases. The soldiers were from the 2206 signal company in Nakhon Ratchasima.

Prime Minister Yingluck Shinawatra yesterday also directed Gen Prayuth to investigate the incident and said the government is ready to provide assistance to the relatives of those killed in the shooting and to ensure justice for all sides. 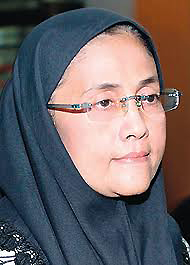 Angkhana Neelapaijit, chairwoman of the Justice for Peace Foundation, demanded Gen Yutthasak and the Isoc Region 4 take responsibility for their earlier remarks suggesting the victims were involved in the insurgency.

She said Gen Yutthasak and the Isoc Region 4 must bring the perpetrators to justice, rather than focus on compensation payments.

She added innocent people in the South were frightened the nightmare of the Thaksin Shinawatra administration would come back to haunt them.

She said there are signs of the return of extra-judicial killings by state authorities which occurred during the war on drugs initiated by Thaksin.

More than 4,500 people have been killed and about 9,000 hurt in the three southern border provinces of Narathiwat, Pattani and Yala since the violence erupted afresh in January 2004.