Three explosions rocked Sukhumvit 71 in Bangkok on Tuesday afternoon, badly injuring an Iranian man who lost both his legs. 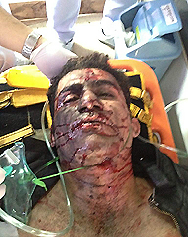 An Iranian man was injured in a bombing in Bangkok on Feb 14, 2012. (Photo Wassayos Ngamkham)

Another man was arrested at Suvarnabhumi airport after police discovered explosive materials in a house rented by three Iranians in Soi Pridiphanomyong 31.

Four other people were injured in the blasts.

Government spokeswoman Thitima Chaisaeng said police reported the house was being used to make bombs and had uncovered a cache of C4 explosives and remote control detonating devices.

She said a bomb went off inside the rented house and two of the three men fled.

The third man, identified as Saeid Moradi, followed and tried to hail a taxi, which refused to stop. Police said he threw a bomb at the taxi, injuring the driver, and ran off.

He then was spotted by police and threw a third bomb at them, but it bounced off a tree and blew his legs off. He was rushed to Kluaynamthai Hospital.

Mrs Thitima said investigators were now trying to find out if an attack was being organised or whether there was a suicide mission planned.

The Foreign Ministry, meanwhile, is contacting the government of Iran to check if the Iranian men are on its terrorist watch list, she said.

Police temporarily closed Klong Ton and Phra Khanong intersections so that bomb disposal experts could inspect the area and asked commuters to avoid using roads in the vicinity.

No explosives were found in the black bag the injured man was carrying.

One of the bombs damaged a telephone booth outside Kasempithaya School. A spokesman said no one at the school was hurt and that parents had been informed of the situation. Pupils were ordered to remain in their classrooms.

Police said the man detained at Suvarnabhumi airport was trying to board an Air Asia flight o Malaysia. They said he arrived in Thailand on the same day as Mr Moradi.