The suspects involved in Tuesday's multiple bombings in Bangkok were part of the same network of terror involved in bomb incidents in India and Georgia earlier this week, according to Itzhak Shoham, Israeli ambassador to Thailand. 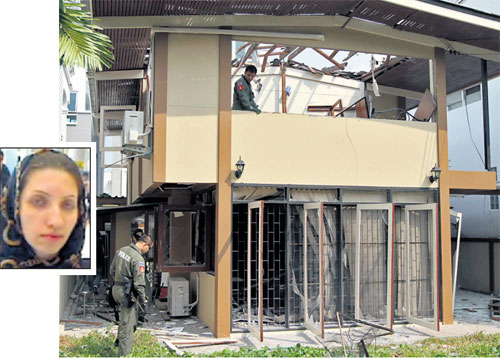 ABOVE Explosives experts search for clues at a bomb-damaged house off Sukhumvit 71 Road that was rented by three Iranian nationals, two of whom were detained after three blasts rocked the capital on Tuesday. SOMCHAI POOMLARD
INSET Rohani Leila, an Iranian woman who left Thailand on Feb 5, is wanted by police in connection with the blasts.

While the target of the bombs was not clear, "we can assume from the other experiences that we were the target," he said.

He said the bombs discovered in a house on Sukhumvit Soi 71 were similar to those used in attacks on Israeli diplomats in India and Georgia.

"They are similar to the ones used in Delhi and in Tbilisi," Mr Shoham said. "From that we can assume that there is the same network of terror."

The ambassador said the arrest of two Iranians in the blasts "again leaves not too much room to assume who was behind it".

Two suspects with Iranian passports were detained after the explosions. Saeid Moradi, 28, was injured in the bombings, while Mohummad Hazaei, 42, was detained at Suvarnabhumi airport late on Tuesday as he was about to board a plane to Malaysia.

A third suspect, identified as Masoud Sedaghat Zadeh, was arrested yesterday by Malaysian authorities in Kuala Lumpur. "The Iranian was arrested under the Immigration Act of Malaysia out of intelligence provided by Thai counterparts," Malaysian police chief Ismail Omar said.

"He is being investigated for terrorism activities in relation to bombings in Thailand."

Four Thai bystanders were wounded in the attacks, which involved three separate blasts that started when a cache of explosives apparently exploded in a house. Mr Moradi, while fleeing the home with what witnesses said appeared to be grenades, allegedly set off two other bombs shortly afterwards, including one that severed his legs.

Police investigators later found two completed bombs each with two kilogrammes of C4 explosives, as well as magnets similar to those used in the car bombings in India and Georgia.

Israeli officials quickly claimed the Bangkok bombings were part of a global wave of terror attacks initiated by Iran.

Thai authorities played down any links to state-sponsored terrorism.

"The devices weren't meant for use against establishments or [groups of] people. It is not an act of terrorism," he said, adding the incident was part of "global tensions" and Thailand was vulnerable as a major tourist destination.

Pol Gen Wichean also played down any relationship between the blasts and recent warnings about terror attacks in Thailand. "I'm not sure. It can happen anywhere. We have vulnerable spots," he said.

But national police chief Priewpan Damapong said yesterday the suspects are believed to be connected with those responsible for attacks on Israeli diplomats in Georgia and India.

He said the bombs found by Thai authorities were similar to devices used in those countries.

He added that while Mr Hazaei denied any connection to Mr Moradi after being detained at the airport, his clothes had traces of explosives and he was found to have suffered shrapnel injuries.

Police investigators yesterday sought court arrest warrants for all three Iranian suspects being held in custody, as well as an Iranian woman, Rohani Leila, who is suspected of having arranged for the rental of the Sukhumvit Soi 71 home.

City police chief Winai Thongsong said Mr Moradi so far has been charged with attempted murder and having explosives in his possession. No terrorism charge has been filed.

Doctors at Chulalongkorn Hospital said Mr Moradi remains unconscious but in a stable condition after undergoing 10 hours of surgery on Tuesday for severe injuries to his legs, stomach and right eye.

He also defended Thai intelligence operations. "[The suspects] came here with nothing [illegal]. They procured a device from here and there and rented a house," he said.

Prime Minister Yingluck Shinawatra said she has instructed authorities to step up security. She declined to say if the incident would affect the tourism industry and played down speculation that some countries might issue travel warnings.

But Thai military and police officials said privately the incident was clearly part of a larger terrorism plot. "Considering what happened in Georgia and India, it is clearly related to terrorism even though the explosions stemmed from their mistakes," one senior security official said. "But to avoid affecting the tourism industry, it has to be portrayed as more of an assassination plot."

He said the government should coordinate efforts with the international community in investigating the case so the right security measures could be taken.