The Criminal Court will give a verdict for lese majeste defendant Chiranuch Premchaiyaporn on April 30, three years after her arrest in March 2009. 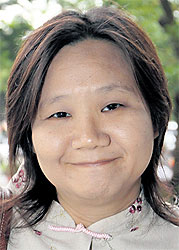 The court yesterday set the date to deliver the verdict after three consecutive days of hearing.

Ms Chiranuch, webmaster of the independent prachatai.com news website, was charged under the Computer Crime Act (CCA) and the Criminal Code's Section 112, better known as the lese majeste law, following postings of messages found on the website's web board deemed to be insulting to the monarchy.

Court officials yesterday said the court has been fair in allowing as many hearings, in-depth testimonies, and cross-examinations as possible.

All sides should also trust the integrity and knowledge of the court in the coming verdict, they said.

The defence lawyer team would have to submit its closing statement within 30 days.

Ms Chiranuch said she would discuss with her lawyers how to prepare the closing statements. She was relieved the hearing was over, but said the verdict has yet to come. "On one hand, it has ended, but on the other hand, we also have to prepare for whatever [verdict] will be delivered," Ms Chiranuch said.

"This is a significant court case. It is unprecedented, so it's imperative that we do our best in mounting our defence, including presenting loopholes or inadequacies in the [CCA] guidelines for web operators."

Representatives of the diplomatic community, activists, and academics showed up during the hearing.

Among them, representatives from the European Commission, the embassies of Switzerland, Sweden, the US and the Office of the UN Human Rights presented their views.

The defence's five witnesses have given testimony, consisting of the website's censorship volunteer, a law lecturer, computer engineering expert, a website owner, and a mass communication expert.

He told the court a few dozen volunteers monitored inappropriate content on prachatai.com's web board.

General readers could also inform the webmaster if they found undesirable content there, Dr Kitipumi said.

She cited a UN report in May last year that intermediaries should not be held liable for any offence committed by a third party unless they collaborated or knew about it.

The authorities have not issued guidelines or regulations to understand and expedite the law, she told the court.

Jittat Fakcharoenphol, Kasetsart University's computer engineering lecturer, said he was approached to be a director and treasurer of prachatai.com in 2008 following the webmaster's increasing concerns that the volunteers were not enough to screen out inappropriate contents.

"We thought about developing a computer programme to help screen and alert us for inappropriate words and content so the webmaster would be able to delete it in time," Mr Jittat said.

However, he said, the ideas were not put in place since the webmaster had decided to close down the web board as she faced more problems, Mr Jittat said.

During cross-examination, the prosecutor asked if it was the duty of the webmaster to take full responsibility for supervising the web board administration. Mr Jittat said that was the case in principle.