City police are looking into possible links between last week's central Bangkok bomb blasts and the posting of a string of stickers with an enigmatic message, a source said. 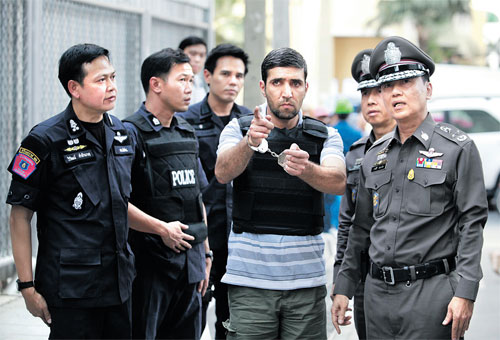 Iranian bomb suspect Mohammad Khazaei takes part in a reenaction scene with police at the Airport Rail Link station at Ramkhamhaeng. He took the train from there to Suvarnabhumi airport, where he was arrested after the three bomb blasts on Sukhumvit Soi 71. THITI WANNAMONTHA

Fifty-two stickers bearing the word "Sejeal" were found posted along a road in Klong Toey district.

They were similar to stickers found at the house where the first of three blasts occurred on Sukhumvit Soi 71 on Feb 14, at another house on Ramkhamhaeng Road rented by suspect Leila Rohani, 31, and under the seat of a seized motorcycle believed to belong to one of the suspects.

The posted stickers were put up on either electricity posts or large signboards starting from an area under a footbridge on Duang Phithak Road in Klong Toey, which runs parallel to the expressway heading for southern Phloenchit Road.

The stickers' trail ended at the mouth of Soi Ruam Rudi near Phloenchit BTS station.

The total coverage of the sticker-posting was about 1.5 kilometres.

The source said investigators believed the bombers used the stickers to mark spots where bombing attacks could be carried out.

The suspects are all Iranian nationals and they were thought to be targetting Israeli officials. 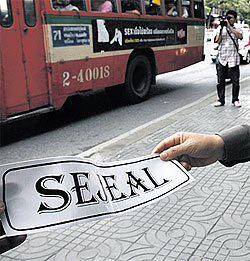 A sticker reading ‘‘Sejeal’’, possibly a reference from the Koran to sejeal stones, was found by police on the motorcycle of a bomb suspect who left the vehicle in Sukhumvit Soi 71, where explosions erupted on Feb 14. Many similar stickers were also found along a road in Klong Toey. KOSOL NAKACHOL

Police believed Israeli officials often travelled along Duang Phithak Road, which eventually leads to the Asoke area, where the Israeli embassy is based.

The word "sejeal" may refer to a passage in the Koran that tells of a miracle when birds from heaven dropped "sejeal stones" on an army riding elephants from Yemen who were attempting to kill Mohammed, scaring the animals and saving the prophet's life.

Furthermore, Palestinian guerrillas have referred to their rockets and mortars used to attack Israel as "sejeal stones".

Meanwhile, police are planning to seek a warrant for the arrest of a sixth suspect.

Details of the suspect have yet to be revealed as the police are still preparing a formal request to the court that it issue the warrant, deputy national police chief Pansiri Prapawat said yesterday.

City police chief Winai Thongsong said the only information known about the latest suspect was that he had already left Thailand for Iran.

On Sunday, a warrant was issued for the arrest of Norouzi Shayan Ali Akbar, 57, an Iranian who was believed to have been involved in the explosions.

Pol Lt Gen Winai said investigations suggested Mr Akbar was only a caretaker of the house on Sukhumvit Soi 71 which was rented by a group of suspects. Police inquiries have not found any evidence that he had been involved in assembling the bombs.

Pol Gen Pansiri said Mr Akbar, who was caught on security camera footage in the morning prior to the Feb 14 explosions, entered Thailand on Feb 2 at 9pm.

He arrived from Teheran on Mohan Air flight W50053 and returned to the Iranian capital on Feb 14 at 8.50am on flight W50050 of the same airline, Pol Gen Pansiri said.

Police were preparing to seek cooperation from the Iranian embassy in Bangkok to hunt for Mr Akbar, he said.

Another suspect, Mohammad Khazaei, 42, who was apprehended at Suvarnabhumi airport after the blasts on Feb 14, denies any wrongdoing, but Pol Gen Pansiri said police had obtained sufficient evidence to link him to the explosions.

Monday afternoon, Mr Khazaei was taken to the house on Sukhumvit Soi 71 where the first bomb went off. 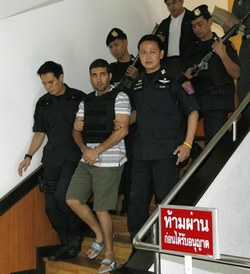 He was also taken to the Ramkhamhaeng Airport Rail Link station, from where he is believed to have travelled to Suvarnabhumi.

Pol Maj Gen Anuchai Lekbamrung, deputy chief of the Metropolitan Police Bureau, said five witnesses confirmed they had seen Mr Khazaei at several locations in Pattaya and in Bangkok during his stay in the country.

Pol Maj Gen Anuchai said police will take the suspect, who is being detained at the Crime Suppression Division, to the Metropolitan Police Bureau for further interrogation today.

Tomorrow police will take Mr Khazaei to the Criminal Court to seek the court's permission to extend his detention.

Army chief Prayuth Chan-ocha, meanwhile, reiterated his view that Thailand was not a terrorism target.

Nevertheless, he urged Bangkok residents to take the Feb 14 bombs as a lesson and urged the public to help security authorities more by staying vigilant for any irregularities.

Gen Prayuth called on operators of hotels, rental houses and apartments to strictly follow the law by keeping a record of all their guests and tenants, which would benefit police investigations in case of crimes.

Deputy Prime Minister Chalerm Yubamrung said the authorities planned to conduct a thorough check of every hotel, condominium, apartment and house that has a guest or tenant from the Middle East.

He was speaking after meeting with the National Security Council, the National Intelligence Agency, and the Royal Thai Police over the bomb blasts. 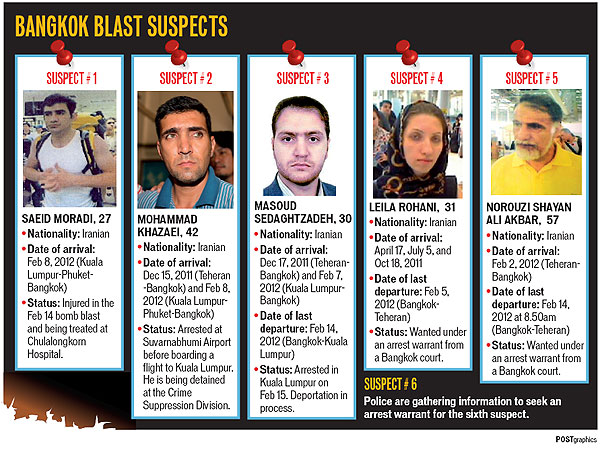