Sa Kaeo police on Monday arrested a Thai woman who had entered the country from Cambodia and seized about a kilogramme of cocaine smuggled from Brazil. 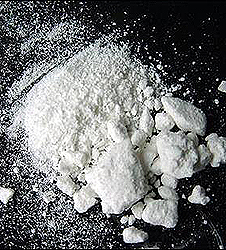 In the far South, two arrested fruit sellers reportedly admitted selling methamphetamine as a sideline because it is more profitable.

The drug suspect, Rungruang Pimpuangsa, 27, told investigators that she smuggled cocaine out of Brazil, arriving in Phnom Penh by plane. She was arrested at a border checkpoint while crossing into Thailand's Sa Kaeo province.

During the inspection, a soldier volunteer found about 950 grammes of cocaine hidden in socks tied around her waist.

According to police, Ms Rungruang said she had opened a diamond and jewellery shop in Brazil. She had later bought the cocaine from a Brazilian dealer for US$10,000.

The suspect said she initially attempted to swallow small packets of the cocaine, but had vomited them out.

She said the cocaine was to have been sold to drug dealers on Bangkok's Khao San Road - a popular tourist destination - at a price of 1,300 baht a gramme.

In Narathiwat today, police arrested two fruit sellers and charged them with possession of 2,000 methamphetamine pills, or yaba.

Police said the suspects, aged 26 and 22, were driving a pickup truck from Pattani to deliver the yaba to a client in Narathiwat's Sungai Padi district.

During an inspection at a traffic checkpoint, police noticed a scale for weighing fruit at the back of the pickup. They dismantled the scale and found 10 packets hidden inside it, each containing 200 yaba pills.

The pair told police that they had been selling drugs for quite some time because they could earn more money than they could selling fruit.