Police have seized illegal drugs with a street value of about 400 million baht and arrested a drug suspect in Bangkok, Deputy Prime Minister Chalerm Yubamrung said on Thursday. 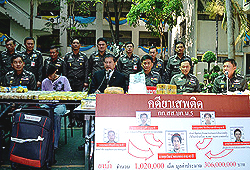 Pol Lt Gen Winai said the suspect, Pathomthat Jirarattanawong, 35, told investigators that the main drug dealer was Supawat Konthong, 40, who had opened a used car shop in Bangkok as a front to his business. Mr Supawat would store the drugs in a house in Pathum Thani's Lam Luk Ka district, according to Mr Pathomthat.

Police then raided the house and found 1,020,000 methamphetamine pills, or ya ba, and 20 kilogrammes of crystal meth, or ice, he said.

Pol Lt Gen Winai said Suwat was not there. Police were looking for him. 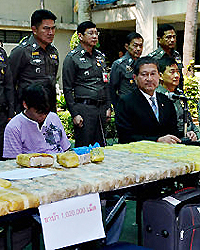 He said Mr Pathomthat confessed that Mr Supawat had about four henchmen responsible for contacting his clients and delivering the drugs.

Warrants for their arrest were sought from the court, he added.

"Media members who criticised me for appointing Pol Gen Priewpan as national police chief and Pol Lt Gen Winai as city police chief should now give me praise, since they have produced results," said the deputy premier in charge of security affairs.

He said there will soon be changes to drug laws.

"If drug suspects face the death penalty, I'll change the law so that they will be executed within 15 days. Otherwise, they will go to jail, run amok and work with other criminals again.

"I don't listen to human rights commissions and non-governmental organisations, because my priority is the country and its people," Mr Chalerm said.

The former police captain said he planned to take pseudoephedrine - a chemical precursor in the production of methamphetamine - as a special case.

Asked about police suspected of possessing narcotics, Mr Chalerm said there were many policemen in the country, and there would be some corrupt officers among them.

In another drug-related case in the northern province, a 57-year-old woman was arrested for possessing 4,000 ya ba pills.

Three other women were arrested for possessing 500 grammes of ice in Chiang Rai, reports said.