A 500,000 baht bounty has been offered for the arrest of two suspects believed to be responsible for Saturday's bomb attack at the Lee Gardens Plaza Hotel in Hat Yai in Songkhla province. 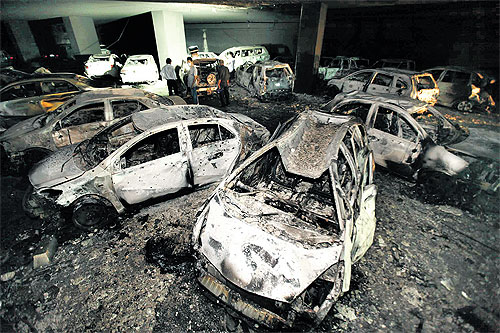 Reclaim them, if you want them

Security officials re-examine the car park of Lee Gardens Plaza Hotel in Hat Yai district of Songkhla after Saturday’s bombing which killed three people and injured more than 350. Authorities on Tuesday asked the owners of the vehicles parked at the bomb site to contact them to reclaim them. THITIWANNAMONTHA

Songkhla governor Grisada Boonrach said yesterday the reward would be given to any person who could provide information that led to their arrest.

Officials have identified two people captured on a closed-circuit camera not far from the scene of the attack.

The powerful blast, believed to be from a bomb planted in a car left in the hotel's car park, killed three people and injured more than 350 others.

Thawee Sodsong, secretary-general of the Southern Border Provinces Administrative Centre (SBPAC), said the insurgent group responsible for the attack was believed to have been behind the Hat Yai airport bombing in 2005. 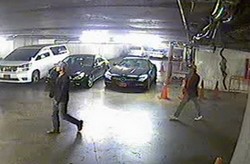 A source at Provincial Police Region 9 said an order has been made to step up security at important places in Hat Yai including the airport, train stations, bus terminals and shopping centres.

Police have been checking video footage from security cameras along Saneha Nusorn and Prachthipat roads.

One eyewitness who saw the suspects was a security guard on duty at the security checkpoint at the entrance and exit to the hotel, said the source.

The source said the bombers, who were suspected of holding dual nationality, had visited the hotel and studied the area before carrying out the attack. They were believed to have already fled to another country.

It was strongly believed the bombs were produced in Hat Yai, not transported from the deep South or any of the four districts of Songkhla that share a border with Malaysia, the source said.

The bombers would have to go through numerous security checkpoints and risk facing an accidental explosion as a result of the summer heat if they had chosen to transport the bombs, said the source.

Pol Gen Veerapong Chiewpreecha, deputy national police chief, said the bombers were believed to be highly skilled. They had parked the car with the bomb on the third floor of the hotel's five-storey underground car park _ apparently aimed at maximising the blast's impact and to cause as much damage as possible.

The bomb was made from two 15kg cooking gas cylinders stuffed with explosives and ammonium nitrate, he said.

Defence Minister Sukumpol Suwanatat yesterday refused to rule out the possibility of informal talks with insurgents.

He insisted this did not mean he supported formal negotiations, nor that the government had such a policy.

He was responding to a question about whether the government would look into the possibility that security officers must have had talks with certain insurgent groups.

Earlier, army chief Prayuth Chan-ocha suggested these talks might have upset other groups and prompted them to carry out an attack to send a message that they also existed.

Local security officials should know best what should be done, he said.

Governor Grisada said the attack had resulted in many hotel reservations in Hat Yai being cancelled.

The Democrat Party yesterday called on the government to open a general debate on the southern violence during the extended parliamentary session.

"If the government doesn't agree, I would ask why reconciliation issues can be discussed," Thaworn Senneam, Democrat MP for Songkhla, said.

The cabinet on Monday endorsed a royal decree to extend parliament's session for an indefinite period to clear up pending legislation. Controversial reconciliation issues are expected to be discussed.

Mr Thaworn, a former deputy interior minister in charge of solving the southern unrest, said Prime Minister Yingluck Shinawatra should take charge of the SBPAC, as stated in the SBPAC law. He said Ms Yingluck should call a meeting of SBPAC officials once or twice a month to create unity among agencies.

Here are scenes by Bangkok Post photographers from the parking garage of the Lee Gardens Plaza Hotel, where a car bomb exploded last Saturday, causing the deaths of four people and injuries to more than 350.