Deputy Prime Minister Yutthasak Sasiprapa insists violence in the deep South has dwindled, but a leader of a people's network claims successive government strategies have failed to ease the problem over the past nine years. 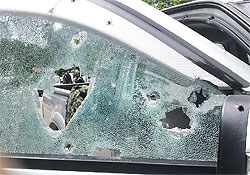 Bullet-riddled remains: A pick-up truck riddled with bullets is parked on a road in Pattani’s Sai Buri district yesterday following a gun attack in which two defence volunteers were shot dead. Several spent cartridges from M16 and AK-47 rifles were found scattered around the area. PAREZ LOHASANT

Gen Yutthasak said the violence in Yala, Pattani and Narathiwat was under control as security forces have managed to quell unrest in their areas.

He made his remarks in responding to observers' views that the situation has not yet improved.

He said daily attacks occurred as insurgents opted to attack weak targets or innocent people. But security authorities were able to control the situation.

Gen Yutthasak said state agencies must revise their working plans and budgets in line with the government's strategies on solving the southern unrest.

The Southern Border Provinces Administrative Centre (SBPAC) and the Internal Security Operations Command (Isoc) recently agreed that every ministry should ask their agencies to fit their activities in with the government's action plan.

The ministries have been given three months to complete their tasks. If agencies under any ministry failed to respond to the national action plan, they would have their budgets taken back, said Gen Yutthasak. The government would divert cash allocated to those agencies to other projects.

But Prasit Meksuwan, president of a people's network, said the southern situation has not yet improved.

"More than 15,000 people in the region have been killed and injured over the past nine years, with an average of 3.5 people killed a day," he said.

Since the separatist violence flared up in January 2004, more than 400 billion baht has been injected into the deep South to solve the problem. However, every government's strategy has been on the wrong track, he said.

Mr Prasit said the government must understand the separatists' ideology if it wants to improve its handling of the unrest. Separatists create unrest as part of their ultimate aim to achieve an autonomous Pattani state, he said.

The government must assign more importance to community relations work to recapture support from locals misled by insurgents, he said, adding military operations must also be carried out to suppress separatists.

Gen Ekkachai Sriwilas, director of King Prajadhipok Institute's Office of Peace and Governance, said there were more than 600 research papers on the unrest. However, all the studies were left on bookshelves as agencies had not used them to solve the problems.

Meanwhile, a teacher network has demanded a compensation package, similar to one approved for those affected by political violence, for families of teachers killed and wounded in the South.

Boonchuay Thongsri, adviser to the Federation of Southern Teachers, said teachers risked their lives in the strife-torn region and they wondered why they had not received a 7.75 million baht compensation package like those affected by the May 2010 political violence.

Wannachai Suwannakarn, secretary to the SBPAC's advisory council, admitted teachers were primary targets of insurgent attacks. Over the past nine years, the southern unrest has left 151 teachers dead and 143 others seriously wounded. However, they had been left out of the state remedy scheme, he said after receiving a petition from the teachers' network.

They took bullets in the head and torso and died on the spot. The attackers stole two .38 pistols from the victims. Police blamed separatist militants.