Security measures have been beefed up in the deep South after a car bomb attack in Narathiwat's Sungai Kolok district yesterday morning. 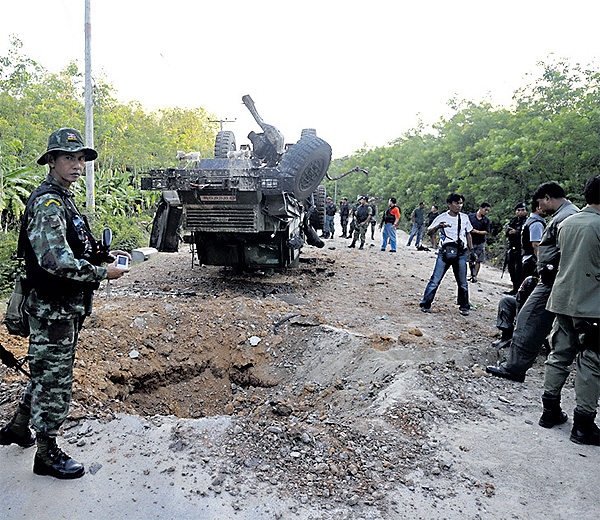 Army Region 4 commander Udomchai Thammasarorath ordered all military units in the South to tighten security measures to deter any further attacks by militants.

Soldiers of the Yala 11th special task force set up a security checkpoint on the Tao Poon-Tha Sab road in tambon Tha Sab of Yala's Muang district. They checked all of the motorcycles passing by and vehicles heading into Yala municipality.

Yesterday was the first day of the Muslim fasting month of Ramadan which will continue until Aug 20. "This is the holy month for Muslims and there should be no violence during this period. Unfortunately, the separatist militants just ignored it," Col Pramote said.

The bomb blast happened about 6.15am.

Police said the blast came from a 50-kilogramme gas cylinder placed inside an Isuzu D-Max pickup truck that was parked in front of Pro Computer and OA Thailand Co on Charoen Khet Road in Sungai Kolok municipality.

The explosion completely destroyed the truck, damaged three cars and a motorcycle parked nearby, and set ablaze the building of a company which occupies four adjoining units of four-storey shophouses.

The company is the biggest supplier of electronic devices and electrical appliances in Sungai Kolok district.

More than 10 fire engines took more than three hours to extinguish the blaze. Firefighters rescued people who were trapped on the top floor of the building. Damage was estimated at about 10 million baht.

The bomb in the truck was detonated with a mobile phone when a police patrol vehicle from Sungai Padi district was passing by.

Police checked the chassis number of the pickup truck and found it had been stolen from Chalong Nuana, a 46-year-old local of Pattani province. Chalong and his associate were shot dead in a housing estate in Rangae district of Narathiwat on Nov 20 last year while they were unloading furniture from the truck.

The vehicle bore licence plates of another vehicle that belonged to Suchart Suwanchaluay, a local from Muang district of Yala. Suchart was shot dead in front of his house on June 21 this year and his vehicle was stolen.

Police believe the bombing was an act of members of the Runda Kumpulan Kecil (RKK) separatist group which is based in Cho Airong district of Narathiwat. Police have already issued warrants for their arrest. A security source identified the suspects as Alawuddin Sohko, Nasree Mueree and Muhammadsakree Sosing.

"It is an unacceptable action," Mr Waedueramae said. "Allah will punish them and bring them to disgrace. They must be brought to justice soon."

He wondered why those who planted the bomb chose the Ramadan fasting festival to carry out their attack as it is the Muslim holy period that requires Muslims to do good things for Allah, themselves and others.

Mr Waedueramae also called on the masterminds to stop such actions in the deep South and he wanted to see suspected insurgents join the process of reconciliation that is building within the nation.

In another incident, an armoured military vehicle was hit by a buried bomb on the Tanyongmas-Samoh road in Ban Juenong Bueso village in Rangae district of Narathiwat about 5.20pm yesterday.

Two soldiers and five military rangers suffered broken bones as a result of the explosion. Shrapnel from the buried bomb wounded a 28-year-old female motorcyclist.

The explosive was placed within a 20-kilogramme fire extinguisher that was wired to a battery hidden in roadside bushes.