A militant was shot dead in an armed clash with a joint police-military unit in Yala’s Raman district on Friday morning, and soldiers emerged unscathed from a bomb explosion, police said.

After receiving a tip from suspicious villagers about five armed men hiding in a house in the middle of a rubber plantation at Ban Kalor in tambon kalor of Raman district, the joint security force led by Pol Lt-Col Prompat Sanitsri, investigator of Muang Yala police station, surrounded the targeted house about 6.25am.

They told the men inside to show themselves, and they ran out of the house and fired at the security team with assault rifles. The police and soldiers fired back. 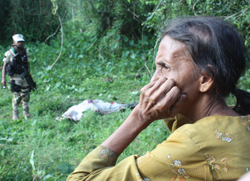 After a firefight lasting about 10 minutes, police inspected the scene and found the dead body of Abdulloh Lasi, 30, a resident of Ban Tamnob in Raman, lying 100 metres from the house. His right hand was still holding an M16 assault rifle.

They also found Duroning Lijiag, who was wounded in the fight. He was taken to Raman hospital.

Three other men managed to escape.

Police found and seized one carbine, one .22 rifle and a quantity of ammunition inside the house.

Soldiers of Yala No 12 special task force reported to police that the explosion occurred on the Patae Rayor-Tanoh Puyoh road at Ban Tanoh Puyoh in Raman district about 11am.

Police found a three metre-wide crater in the road and the soldiers’ parked armoured personnel carrier nearby.  The only damage was to the headlights on the vehicle.

They also found a wrecked cooking gas cylinder and a 100 metre-long  wire linking the bomb’s remains to a detonating switch in the roadside forest. They believed about 15kg of explosive substances were put inside the gas cylinder and it was detonated electrically.

Soldiers told police that a unit of 12-personnel security force, led by Lt Kowit Chansuk, was travelling in the vehicle going to inspect a suspicious box placed in front of Patae Rayor school, after being lerted to it by  villagers.As the soldiers were arriving at the spot, the home-made bomb was detonated. It went off too soon and the explosion caused no injuries.

Police attributed the bomb attack to a separatist militant group led by Rusdee Samae and Abdulloh Lituemung, wanted under arrest warrants for inciting violence in the deep South.

Since the resurgence of insurgency in 2004, around 11,000 violent incidents instigated by secessionists in the Muslim- dominant southernmost provinces of Yala, Pattani and Narathiwat have occurred, with almost 5,000 people killed and nearly 8,000 injured.