The son of Chalerm Yoovidhya, of Red Bull fame and owner of Siam Winery, was on Monday morning arrested on a hit-and-run charge, and a Thong Lor police superintendent was transferred to an inactive post for allegedly arresting am innocent driver.

Boss, aged 27, told investigators that he was driving a black Ferrari and ran into a motorcycle about 5.30am on Monday on Sukhumvit Soi 47, according to police.

The motorcyle rider, Pol Sen Sgt Maj Wichian Klanprasert of Thong Lor police station, was killed. His body was dragged about 200 metres along the road. He reportedly suffered a broken neck and multiple broken bones.

Police said his pistol could not to be found when investigators arrived at the scene. His body was sent for an autopsy.

Prior to the arrest, witnesses told police that a black sports car ran into the motorcycle and then sped away. Police later found the car parked in a big house on Sukhumvit Soi 53. The house was identified as belonging to the Red Bull family.

Metropolitan Police Division 5 deputy chief Jirapat Phumjit said he had talked to a maid inside the house, asking that the hit-and-run suspect surrender for questioning. The maid told him that the house owner was out.

Police did not entirely believe the maid and dispatched a team to surround the house.

Reports said Pol Maj-Gen Kamronwit Thoopkrachang, the new Metropolitan Police chief, went into the house where the sports car was parked to talk to the people inside. Reporters were not allowed into the premises.

The suspect was later arrested.

"We traced a gasoline trail which leaked onto the road until it led us to the house with the Ferrari," said Pol Lt-Col Viradol Thubthimdee of Thong Lor police station, where Mr Vorayuth was taken for questioning, AFP later reported.

"He will be charged with causing death by driving and failing to stop and inform the authorities, with a maximum penalty of 10 years' imprisonment and a fine," Pol Lt-Col Viradol said, adding that Mr Vorayuth denied the accusation. 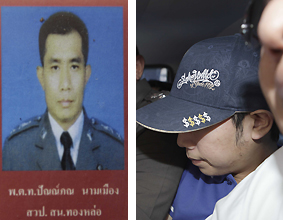